The IC market recorded its first-ever June sequential sales decline this year, according to data from WEMA, SIA, and WSTS dating back to 1976.

According to IC Insights, June usually sees high single-digit or double-digit sales gains while the previously weakest year (1985), saw sales ahead by 1 per cent. Never, until this year, have June IC sales declined.

These figures are of concern as June tends to be a quarter-ending five-week month and that alone has historically been enough to generate a sales uptick compared to the four-week month of May. Secondly, June is normally one of the strongest months of the year for IC sales since OEMs are buying chips to build into their new systems in time for back-to-school and end-of-year holiday sales.

The biggest contributor to June’s total IC market decline was the sudden and dramatic drop in memory IC sales. Consequently, Micron is forecasting a -17% sales drop for its fiscal 4Q (ending in August) and while Samsung and SK Hynix do not provide next-quarter sales guidance, it is reasonable to presume that their 3Q outlooks are somewhat similar to what Micron has forecast.

The second and third quarters of the calendar year are typically the strongest two quarters for IC sales and since 1984 2Q sales results have grown by an average of 4.2% and 3Q sales have increased an average of 6.1% (See Figure below). Naturally, these figures swing higher or lower depending on where the industry is in its supply-demand cycle, economic strength, and other factors. 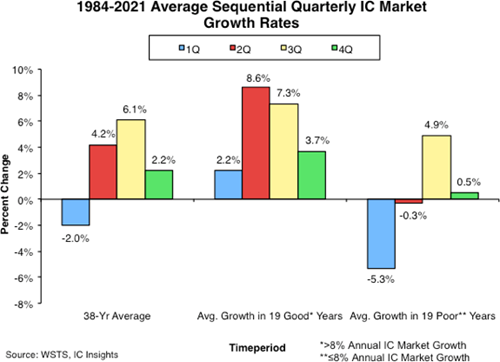 In 2Q22, IC market growth was flat, falling below the long-term average.

Based on IC Insights’ assessments of company sales outlooks for the rest of this year, it appears that 3Q and 4Q IC sales stand a good chance of falling short of their long-term average growth rates, as well.

Much of the current IC market weakness is being blamed on economic concerns caused by rising inflation, ongoing supply chain disruptions, and from suppliers and OEMs working to reduce IC inventory levels. Several semiconductor companies noted during their 2Q22 financial earnings calls that inflation has put a dent in consumer discretionary spending. Weakness was particularly evident for shipments of consumer PCs, low- and mid-level smartphones, televisions, game consoles, and personal electronics devices.

Most IC product categories to experience market growth in 2012