It was felt that the techniques required for MIS limited both the touch- and force-related sensations seen as necessary in delivering successful surgical procedures.

Unlike the human hand and wrist, these instruments were not providing the degrees of motion necessary for surgery and it has only been in the past 20 years that robotic surgical technology has been able to deliver those types of capabilities.

Surgical robotics first appeared in 1985 with the advent of the Puma 560 which was able to carry out neurosurgical biopsies and, later, some forms of prostate surgery. In 1996 Zeus, a complete robotic surgical system, offered greater levels of movement, tremor elimination and motion scaling. In fact, throughout the 1990s innovation proceeded in terms of camera holders and positioners, but it wasn’t until 2001 that the da Vinci system, developed by Intuitive Surgical, first appeared. An advanced master-slave system it consisted of multiple robotic arms or manipulators that could be remotely controlled by a surgeon using a console. Deploying miniaturised operating arms the system’s ‘Endo-Wrist’ features meant that it could better mirror the hand and wrist movements of surgeons.

“The da Vinci was the major breakthrough in terms of robotic surgery,” explained Dr Pietro Valdastri, Director of Robotics at Leeds School of Electronic and Electrical Engineering and Director of the STORM Lab UK. “It had a profound impact on the profession and was a major advancement in replicating the dexterity of the human hand. It reduced invasiveness and enabled surgeons to enter the body using a much smaller incision.”

Intuitive Surgical held a virtual monopoly within the surgical robotic market which meant that it wasn’t until a few years ago that, as patents expired, new companies were able to enter the market with the likes of Johnson & Johnson, Medtronic and Stryker investing billions in a new wave of surgical robots.

According to Dr Christos Bergeles, Associate Professor at Kings College London, leading the Robotics and Vision in Medicine Lab, ”With the lapsing of patents we were able to see many more companies enter the market and as a consequence the diversity of robotic applications being developed increased substantially. Today, we are seeing more robots being designed for specific surgical procedures.”

Over the years, questions have often been asked as to whether these machines actually contribute to better patient outcomes compared with traditional procedures, but with the arrival of artificial intelligence (AI), improved connectivity, and other technological advancements robotic surgery is now far more accurate and accessible to a much wider range of surgical procedures.

“The technology was never really the issue. I think what’s held the market back was perceived ‘value-for-money’,” explained Dr Bergeles. “I think the case for robotics has been made but you still have to contend with large up-front costs and that’s going to be an issue for publicly funded systems, like the NHS, where there has been a slower uptake. Are these technologies cost effective and can a big investment be justified?”

In privately run systems it’s less about cost and more about remaining competitive.

Whatever the driver robotic applications are now employed in a wide variety of different surgical procedures, where both dexterity and precision are required.

In the UK Cambridge-based CMR Surgical and their robotic platform – Versius – which features three independent arms controlled by a surgeon, allows for precise colorectal or gynaecological surgery and helps to make longer surgical procedures less strenuous.

Unlike the da Vinci robot, the Versius is portable and can be set up in around 15 minutes and, as a result, opens up minimal access surgery to a much broader range of patients. The platform is currently being clinically tested by the NHS.

”Many larger robotic platforms are expensive, take up space and take time to set up and a lot of surgery can still be undertaken without the use of robots,” said Dr Valdastri, “as a consequence we are seeing the development of new business models in which robots aren’t bought outright but loaned to a hospital, which then pays for the number of procedures that they are used for.” 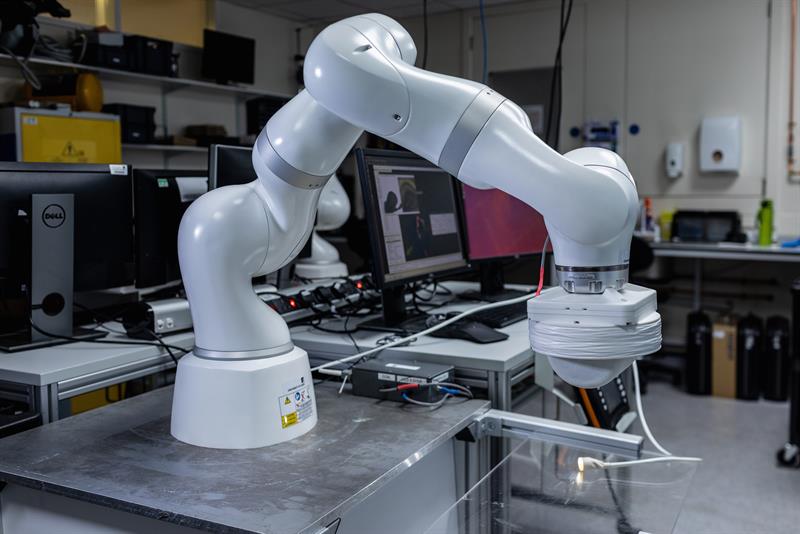 Surgical robotic platforms like the da Vinci were certainly limited in terms of their dexterity and, as a result, were known to cause inadvertent damage to adjacent vital structures and, as a consequence, slowed the routine adoption of robotic surgery.

Today, however, medical practitioners are seeing a new generation of smaller robots which which use soft, flexible and deformable materials.

Universities, start-ups and SMEs are working on biocompatible soft materials, super-elastic materials and 3D-printed soft plastics, such as silicon elastomers, that will allow for much greater safety. Robotic shapes and mechanical properties are able to better respond to touch and so enhance the intrinsic safety of the device.

These robots also allow for greater elongation so surgeons can ‘tune’ the exact position of the robot and provide much greater dexterity and flexibility.

“At Storm Lab UK we have developed an expertise in magnetic manipulation and the localisation of medical capsules and soft robots which enables us to go deeper inside the human body to diagnose and treat diseases,” said Dr Valdastri.

The lab has developed miniaturised endoscopes that can be used in many diagnostic tests, surgeries or for drug delivery and which can provide for much greater freedom of movement - causing far less tissue damage.

“From soft robotics and intelligent control, through to advanced proprioceptive sensing and smart actuation our focus is on creating more affordable medical technologies,” he explained.

“If you take stomach cancer, for example, it is among the world’s most common forms of cancer. Screening requires a visual inspection of the stomach cavity and that is conducted by using a flexible endoscope that’s passed into the stomach via the mouth or nose. If you can detect cancer early, then you can significantly reduce mortality rates. But, for low-to-middle income countries that can be a challenge due to the costs associated with sedation, monitoring and reprocessing equipment.

“The BellowScope is much cheaper, single-use and more intuitive to operate and can reduce patient discomfort.”

The BellowScope has a multi-backbone ‘snake-like’ handle and a soft pneumatically driven camera tip – both described as a significant advancement in endoscope design.

“The team are also looking at miniature magnetic tentacles to enable surgeons to reach into many areas of the body that are currently difficult to access. We think that these devices could be used in lung tumour biopsies or cardiovascular surgery, where the risk of tissue perforations is extremely high.

“These tiny tentacles are just a few millimetres in diameter and have a very soft, highly flexible body made up of a series of tiny magnets, embedded along their length that can be controlled by an external robotic magnetic arm,” explained Dr Valdastri.

Researchers from the School of Biomedical Engineering & Imaging Sciences at Kings College, London are also developing new robotic technologies and have built the MAMMOBOT, a small robot which is able to pass through mammary ducts to detect early precursors of invasive breast cancers, often missed by mammography.

Dr Bergeles is one of the lead scientists on the project. “The MAMMOBOT can be unrolled like a balloon when pressure is applied and, significantly, we’ve been able to add steering capabilities to these ‘growing’ robots through which surgeons will be able to pass a steerable catheter.

“The operator can elongate the robot though using pressure and the steerable catheter makes sure that the tip of the robot is oriented in the right direction.”

Imperial College in London is also working on a new probe. The STING probe (Soft Tissue Intervention and Neurosurgical Guide) is a flexible robotic needle that can be steered through the brain to deliver drugs and diagnostic sensors to areas that are currently inaccessible.

Critically, it can be steered around blockages that otherwise would have had to have been operated on, while the catheter can be left in place for future treatments.

The probe is part of a much broader neurosurgical platform that is being developed to navigate and deliver drugs deep inside the brain, preventing surgeons from going into delicate tissue regions by physically nudging them to keep them in pre-defined areas by using a combination of algorithms and optical techniques to guide them.

“All these types of technologies are intended to augment a surgeon’s capabilities and to free up their time so they can focus on more complex surgeries,” explained Dr Valdastri.

“The next generation of robotic platforms are focused on miniaturisation and ease of use,“ said Dr Bergeles. “It’s about driving down costs and dealing with specific diseases. At Kings College and UCL we’re looking at breast cancer, while at Imperial their focus in on delivering drugs into the brain. These are systems being developed for niche procedures.”

The commercial environment is a dynamic one and investor interest has grown significantly in recent years.

“There are plenty of funding mechanisms in place,” according to Dr Valdastri. “But funding is just one issue of many, and in terms of academic research it’s cyclical.

“Pushed, I would say that the biggest issue for research into robotic surgery is the ability to attract talent, and that’s crucial. Post-Brexit it’s a lot harder to attract the best and the brightest from Europe. EU students are now treated like international students, so they now cost the University double to employ.

“But we live in a global world so it should be possible to develop a pipeline of talent going forward. Scholarships are available and I’d urge the government to consider making it easier for students to apply.”

Internationally, the UK is well positioned to exploit opportunities within this space; there is considerable research being undertaken; funding is available and there is rapid growth in the medical technology sector but what is missing is support for the next stage – the commercialisation of the technology.

“How do we go about translating these technologies from research to a start-up or SME and then bring it to market?,” asks Dr Valdastri. “That’s the challenge and there are growing calls for a dedicated Innovate UK programme to help the surgical medical sector to attract investment and to create a Catapult specifically for surgical robotics or for medical technology in general.”

Whatever the future holds, these types of advances are intended to deliver cheaper and safer robots which can be designed for specific procedures, making them non-invasive and more cost-effective.

AI is helping to make surgical platforms easier to use and provides an increasingly intelligent decision support system for the operator, as well as a high degree of flexibility that will enable inexperienced surgeons/operators under the mentorship of veterans, able to undertake surgeries and expand patient access.

And, although far in the future, microbots are now a potential advancement that would require no incision at all, but rather could be introduced into the patient’s circulatory system and transported to a specific destination to carry out a procedure.

The rise of the machines

Will new standards help control the rise of the robots?

The rise of fintech

Feeling the future of robotic control