While robots have been in use since the 1960s, it is only 25 years since robotic technologies were first used to assist surgeons in improving surgical outcomes, providing such benefits as less trauma on the body, minimal scarring, and faster patient recovery times.

Among the first robots to be deployed were ROBODOC and Acrobot, developed for use in orthopaedic surgery. Acrobot was, in fact, the first robot to be developed with what is described as active constraint – this allowed surgeons to cut only within defined safe regions, preventing them from damaging surrounding tissue.

Another robot, the Probot, was designed to address prostate surgery and achieved a robotics first when it actively removed tissue from a patient in a clinical setting.

As robot technology has developed, numerous academic and research centres have been established and one of the most successful is the Hamlyn Centre for Robotic Surgery at Imperial College in London.

Established in 2008, the centre was set up by Professor Guang-Zhong Yang and Lord Ara Darzi with the long term aim of developing advanced minimally invasive surgical robots that combine intelligence, sensor rich technologies, as well as seamless human interaction with machines.

Professor Yang is also deputy chairman of the Institute of Global Health Innovation at Imperial College and holds a number of key academic positions at the university.

While modern surgery can effectively be traced back to the 1860s, Prof Yand says the Post War period saw the development of minimal invasive surgery, such as angioplasty and new technologies such as the development of the fibre-optic flexible endoscope. “This type of surgery is difficult to perform and requires the use of specific instruments that require dexterity to use properly. Robotic surgery was originally seen as helping to augment those basic invasive surgical skills.”

Robotic surgery is defined as a type of minimally invasive surgery whereby patients are operated on using miniaturised surgical instruments that fit through small incisions in the body, usually no more than 6mm in diameter.

“The first generation of medical robots in the early 1990s was intended to improve the dexterity of surgeon. The main problem with keyhole surgical instruments is that access to the patient is, by its very nature, limited. So device pivoting and tissue contact is difficult to perform accurately.

“Over the past 25 years, we have seen the development of surgical robots, micro-robots and flexible systems that are intended to better support this type of surgery.

“Robots are able to provide what we call aligned visiting motor access and motion scaling, which aids surgeons by scaling down their motions as well as compensating for and removing any hand tremors.”

The ultimate effect is to give the surgeon unprecedented control in a minimally invasive environment.

“That means every movement the surgeon makes with the master controls is replicated precisely by the robot. The surgeon can even change the scale of the robot’s movements so, for example, using a 4:1 scale, the tip of the robot’s arm will move just an inch for every 4in the surgeon’s hand moves.” 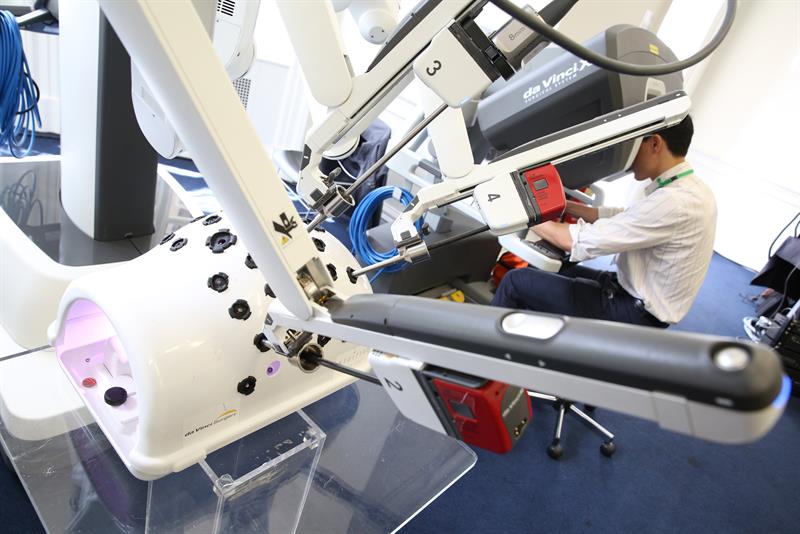 The economics of robotics, however, remains a challenge, according to Prof Yang. “While robotics can improve the consistency, safety and quality of surgery – surgeons do not always need to be in the same room as their patients, specialists who are in demand are then able to treat many more people – and help to make long procedures less stressful for surgeons, the costs of acquiring and then maintaining these systems can be prohibitive, especially for modern healthcare systems whose budgets are already under considerable strain. At present, robots are not cheap.”

Looking back, Prof Yang identifies two significant milestones in the development of medical robots – the first being the medical licensing of the Zeus surgical system, developed out of work originally conducted for NASA by Computer Motion, as well as the development of the da Vinci robot by Intuitive Surgical.

The da Vinci medical robot has to become one of the most successful surgical robots and the latest version of the platform uses miniaturised instruments deployed on three separate robotics arms to enable surgeons to maximise the range of their motions and the precision of their actions. A fourth arm provides a high definition 3D camera that helps to guide the surgeon during the procedure.

“The defining moment for modern robotic surgery came when you saw a significant take up of the technology. In the US, the market is much larger than in Europe. Costs are less of a problem for private healthcare providers, compared to the more socialised healthcare that tends to be on offer in Europe,” Prof Yang suggests.

The number of surgical procedures performed using the da Vinci surgical robot are growing at around 14% year on year. In 2015, the device was used in some 600,000 procedures worldwide. Around 2400 da Vinci robots have been deployed in the US, with a further 1200 operating in the rest of the world.

“Surgical robotics is costly and it is vital that a vibrant ecosystem is developed that combines academia and business to support them,” argues Prof Yang.

Traditional robotic systems use a surgeon master console and a patient slave manipulator. “But today, surgical robotic research is evolving towards the development of platforms that are capable of performing specific types of surgery which are intended to support or assist surgeons. For example, we are no longer focused on robotic systems capable of covering an entire surgical procedure.

“I doubt that in the future we will see ever larger surgical robots being developed; the focus is likely to be on the development of smarter, miniaturised devices which are mechatronically enhanced to assist the surgeon. The focus will be on developing more accessible and more cost effective technology,” he believes.

Robotic systems have tended to be complex and expensive, with a large footprint in the operating theatre. While research is focused on simpler, lower cost devices, Prof Yang suggests that smarter robotic instruments will be developed that will integrate imaging and sensing technologies.

“Alongside these advances, I also expect to see the growing use of augmented vision to help improve the surgeon’s experience by delivering immersive visualisation and high definition images, removing the need for invasive surgery.

“New techniques will ultimately lead to new and safer as well as more accurate procedures,” he continues. 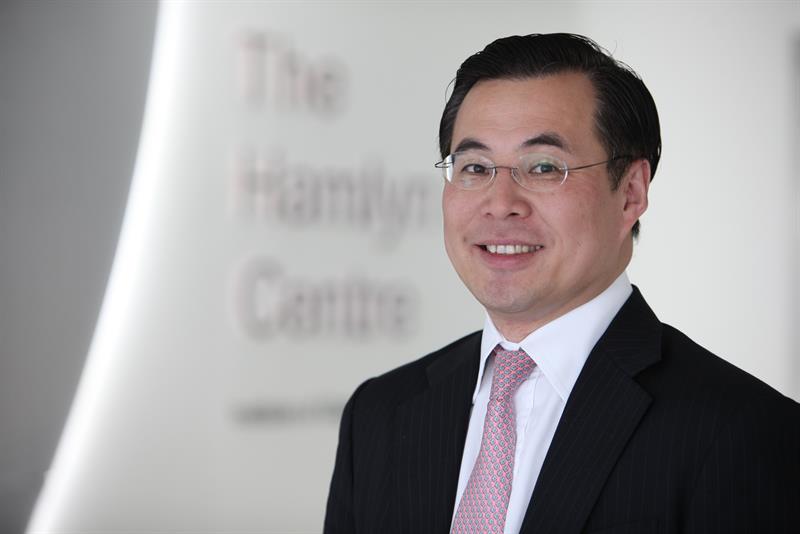 While there is much excitement around the potential of virtual reality, Prof Yang believes that augmented reality holds greater potential when it comes to robotic surgery.

“Virtual reality is not new and has been around for many years as a tool for training surgeons. While it is by no means a new technology, the displays are much improved. And while there may be an element of hype around the whole concept, we are very aware of its use in the surgical environment.”

Prof Yang believes that augmented reality, combined with haptic feedback techniques, will enable surgeons to perform ‘perceptually enhanced’ actions in which the surgeon and the robot will be able to work together, sharing command of the tools being deployed.

“It is an exciting development in surgery. Imaging is crucial in performing accurate and safe surgery – it provides the navigational tools. At the moment, surgeons can only see the exposed tissue – augmented reality will enable them to ‘see’ beyond that. By knowing what is going on, what is below the surface and the consequences of any surgical activity, patient outcomes will certainly be improved.”

As computers become more powerful, the fusion of data from a variety of sensors will help the robot to become more aware of the entire surgical environment. As a result, Prof Yang believes surgeons will be able to make greater use of robotic assistance and, in some cases, allow robots to perform surgery autonomously which requires high accuracy, but which also involves a great deal of repetition.

“Obviously, this will be conducted under the supervision of a surgeon,” suggests Prof Yang.

A survey conducted in the US has raised some concerns over the safety of robots, linking them to at least 144 deaths and more than 1300 injuries, as well as recording more than 8000 device malfunctions.

The research, conducted by the University of Illinois at Urbana-Champaign, the Massachusetts Institute of Technology and Chicago's Rush University Medical Center, covered a 14 year period up to the end of 2013. The work painted a picture in which mistakes, burns and ‘lost’ equipment were not infrequent.

While the study suggested that the number of incidents was limited when the overall figure of 1.7million robotic procedures was taken into account, it did suggest that there were some risks associated with robots, especially when they were used in more complicated surgery and where there was less experience and expertise among users.

The Hamlyn Centre has a strong track record in developing medical robotics that stretches back to the early 1990s. Today, the Centre is focused on a range of innovative techniques and technologies including flexible telemanipulators, autonomous microrobots and perceptual docking and active constraints.

According to Prof Yang: “While the use of miniaturised slave instruments has increased, the technology still needs further development and its use on more advanced procedures remains limited.

“We have developed flexible snakelike manipulators that are able to navigate in confined spaces and can move around obstructions to gain access to restricted areas.”

This intelligent flexible endoscope will allow an anatomically natural approach that will not only cause less internal damage, but will also enable enhanced levels of visualisation to better control the manipulator.

In order to bridge the gap between the tool tip and the surgeon’s hands, the centre is also developing what is described as a perpetual docking concept. This will deploy sensory information to control the robot arm which, in turn, will then have the ability to learn and acquire knowledge from surgery it has conducted.

Another development is in autonomous microrobots. “This is a relatively long term research focus on the part of the centre,” Prof Yang says. “These robots will require a large number of enabling technologies, including mobility, actuation, navigation, non-image sensing, software architectures and multiple robot co-operation.

“These types of robot are well placed to deliver new treatments direct to the condition under treatment – although considerable work is required in terms of fault tolerance and the physical recovery of the robotic device.”

In the future, surgical robots will become more clinically relevant but, in order to succeed, the technology will need to address a number of other issues, including cost effectiveness, if they are to meet the ambitions of researchers and surgeons alike.