Robots and autonomous systems, together with artificial intelligence, connected data and digital infrastructure could have the potential to revolutionise the way in which social and medical care for the elderly is delivered.

The rising costs of care and the need to provide much better levels of support for a growing ageing population, not only in the UK, but around the world, means that the development of these types of technology should be developed as a matter of priority by governments and health providers.

The problem is not so much that we are living longer but we are doing so with debilitating illnesses that not only undermine our health but also our mental capabilities. So, how do we help the elderly to live more fulfilling lives and not simply look to better manage physical or mental decline as we age?

In the UK, there are currently almost 12million people who are aged 65 or over. By 2045 that is expected to have reached a total of 19million and with that increase the number of people coping with illnesses, such as arthritis, heart disease of dementia is also expected to increase.

Total public spending on social care in the UK is driven by population need, the resources that are available and national priorities and in the summer of last year, the UK Government announced a significant increase in the funding that would be made available.

However, that funding was for the National Health Service (NHS) as a whole, and the announcement was criticised for failing to address problems around social care provision, especially for the elderly.

The Chief Executive of the NHS Confederation Niall Dickson said: "Social care remains the Achilles’ heel, it has been consistently underfunded, neglected and unloved by politicians over many years and the extra funding announced is clearly inadequate."

In fact, it’s been estimated that over 1.2million older people in the UK are having to live with some level of unmet care need.

So how can technology be deployed to address this?

According to a UK-RAS Network paper, published in 2017, ‘A Connected Care Ecosystem for Independent Living’, robotics could be used to support social care and connect users at home, in residential care and in hospital. Better care and support for independent living is certainly cheaper to manage and, more importantly, provides better support for independent living. By providing a more joined-up service it should be possible to make the transition from hospital to the home a lot easier to manage and in doing so free up resources in the NHS.

With more elderly and rising numbers of healthcare challenges technology, in the form of more portable and easier-to-use devices, could help to blur the distinctions seen between social and health care as more assistive robotic medical devices are deployed to monitor conditions in the home.

Researchers at Imperial College London have developed a robotic rehabilitation tool for stroke sufferers, for example, which helps them to improve their hand function.

Rehabilitation, such as for stroke sufferers, can often require long term supervision and support, robots and virtual reality are seen as enabling the healthcare system to provide much improved long-term support, especially if that support has been customised to meet the needs of the individual patient.

Japan is one of a growing number of developed countries that is having to confront the problem of an ageing population – and with over 25 per cent of the population over 65 Japan is being forced to adapt and use technology to address a rapidly ‘greying’ market.

"Japan is a super ageing society and many older people don’t know how to take care of their health," said Kohjiro Ueki, director of the Diabetes Research Center at the National Center for Global Health and Medicine in Tokyo.

Speaking to Forbes magazine, Ueki talked about the impact of diabetes on the country’s ageing population, with over 10million people now suspected of having the disease. 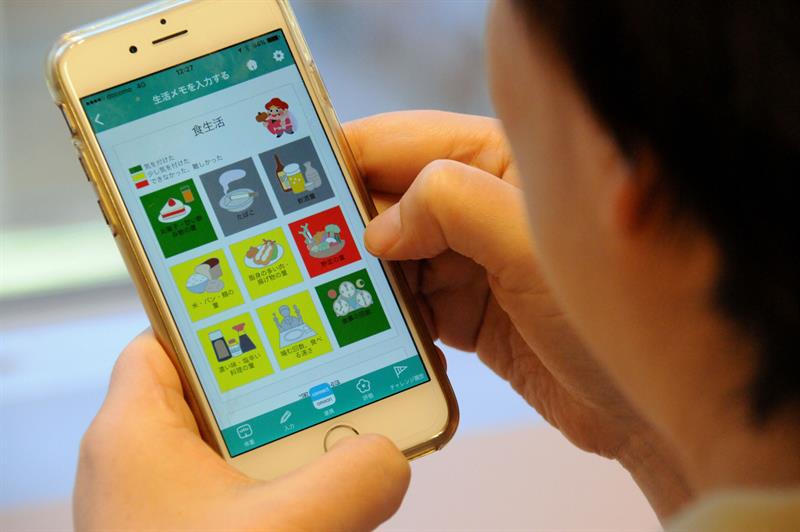 Costs associated with the disease are soaring, but it can be easily managed. In response, Ueki and his colleagues have developed an app, which is being deployed in a controlled trial called the ‘Prevention of Worsening Diabetes Through Behavioural Changes’ which uses a IoT self-monitoring system to monitor eating habits.

The app records step counts, monitors physical activity, diet, body weight and blood performance. That data is collected and then uploaded to the Cloud and monitored by the individual’s doctor.

The trial involves over 2000 people and is one year into a two-year trial period.

The IoT has enabled doctors to better manage their patients and more sophisticated algorithms are planned that could see users receiving messages to boost their exercise levels or seek help.

This is just one of many trials involving technology that is intended to help the elderly cope with long term illness or to improve their quality of life.

For example, smart tags, inserted into clothes or shoes, are being used to monitor the movements of dementia sufferers.

Successful ageing is defined as including a low probability of disease and disease-related disability, a high level of physical and cognitive functioning and an active engagement in life.

Robots could be used to assist people as they age helping them to maintain both physical and social activity, ensuring that they eat and drink appropriately and could help to promote a feeling of control and empowerment, that people tend to feel they lose as they grow older.

There are already a growing number of robotic devices that can help in the home, and robotic and autonomous systems are expected to be incorporated into everyday devices enabling independent living.

Future homes are likely to integrate technology into consumer devices expanding their functionality and ease of use. Items of furniture with embedded intelligence are now appearing. Tables, for example, are being developed to act like robots – coming to the user.

One project – iDress – is intended to develop a proactive system capable of assisting someone trying to dress, while exoskeletons are being developed to help elderly people with walking difficulties, increasing their independence and motor function. In time they could be used to replace wheelchairs.

Elderly people who are socially isolated are at much greater risk of developing a variety of ailments and while robots are good at improving an elderly person’s movement they can also play a role in keeping elderly people engaged both socially and mentally.

Loneliness and social isolation are known to have a serious impact on the health of the elderly and there are worries that as the population ages, so the problems associated with social isolation will only increase.

Japan, as we have seen, is facing a ‘greying’ crisis, and as a result has invested heavily in developing social care robots that are able to serve, communicate with and provide emotional support.

In Germany the Fraunhofer IPA has developed a Care-o-bot that has been deployed in a number of assisted living facilities and are able to carry food and drink to residents, while at the same time providing entertainment in the form of memory games.

Importantly, the robot has been programmed to keep its distance from residents, use limited gestures and reflect emotions and show that it understands and demonstrates what it intends to do.

CT Asia Robotics has developed a personal assistant that can help the user to remember to take pills and tracks their health. It can take calls from family and doctors too.

These devices are all suitable for use in a communal environment but robots designed for use in the home will need to be able to do far more.

One example is the ElliQ, which is an interactive robot that comes with an integrated tablet – not only does it track pill usage, monitor and take phone calls and the like, but it can act as a companion. It does this by providing updates on the weather or by suggesting outdoor activities and uses machine learning to better understand a user’s preferences.

But while the demand for robotic solutions is growing there are doubts tabout this so-called robotic revolution. Many medical professionals argue that the use of robots only compounds the problems of isolation and that people will need people in order to ensure their emotional and psychosocial well-being. Whatever the concerns, however, research does point to the fact that the use of social robots really can address issues of care and isolation and while there are some who are concerned by the deployment of robots to address these problems, the majority of robotic researchers tend to be in favour of their use.

Robot companions, which use artificial intelligence, are increasingly being used and these devices are able to interact with people on their own.

Examples include pet-like companions such as Aibo and Paro and MiRo, the latter is manufactured in the UK by Consequential Robotics, which is a spin out from the University of Sheffield.

MiRo is manufactured in the UK by Consequential Robotics

MiRo is a fully programmable autonomous robot with six senses, eight degrees of freedom and an innovative brain-inspired operating system and was developed to provide a platform suited for developing companion robots.

According to the company, MiRo is based on a simple premise, which is that animals have the social qualities that are desirable in social robots in that they are robust, good at communicating and adaptable.

Using that approach the robot is suited to robot-human interaction.

Although they can offer limited interaction these ‘pets’ have been shown to reduce feelings of loneliness and in one test case, involving the use of robotics dogs in a UK care home, brought increased levels of happiness and comfort.

When it comes to controlling robots the growing use of voice commands is proving a benefit, as many elderly people find using a touchscreen difficult.

Portsmouth University is developing speech and tablet interfaces for assistive robots that can operate inside and outside the home and is part of a much wider project being funded by the European Union, Robot-Era.

For people with conditions that affect their ability to speak clearly a team at the University of Sheffield is developing Automatic Speech Recognition technologies.

The research being undertaken into social robots is only just the beginning, but while humans are still better at providing the care and social contact needed by the elderly, robots will certainly be able to fill many gaps as the technology evolves and develops.

Should robots replace social and care workers? That’s a loaded question and most professionals would argue that there needs to be far more effort to address the wider public’s anxieties around the use of robots.

Building safety and trust in their deployment will be crucial if they are to be accepted into people’s homes. That safety needs to encompass mechanical safety, software safety and physical safety when robots have to interact with the wider world.

While there’s a long way to go, the opportunity to use robots and autonomous systems in social care
in the coming decades are profound and they are likely to have a significant role to play in enabling the elderlyto grow old actively and to do so with dignity.

What impact will robotics and AI have on healthcare?