Despite numerous economic shocks to the global economy, total microprocessor sales are expected to maintain double-digit percentage growth in 2022.

According to IC Insights’ updated second-quarter semiconductor forecast, MCU sales are expected to increase by 12% to a record-high $114.8 billion this year, benefiting from higher average selling prices (ASPs).

Total MPU sales grew 13% in 2021 and climbed 16% in 2020, when the Covid-19 drove demand for more personal computers, smartphones, and Internet connections.

IC Insights’ 2Q Update to the 2022 McClean Report service shows total MPU shipments rising just 3% this year, which will lift unit volume to an all-time high of nearly 2.5 million processors following increases of 6% in 2021 and 5% in 2020. MPU revenues in 2022 are expected to get a boost from an 8% increase in ASPs after average prices grew 7% last year and 10% in 2020, says IC Insights’ 2Q Update.

The figure below shows that the ranking of the top five microprocessor suppliers was unchanged in 2021 compared to 2020, with their combined revenue values of MPUs shipped last year rising 15% to $88.3 billion. 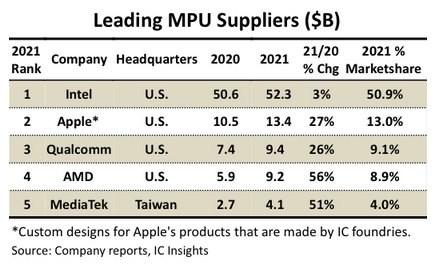 Many application-specific system-on-chip (SoC) designs with integrated CPU cores are also not counted in the MPU ranking.