The farm is perhaps the last place where you would look for advanced technology. But pressures on food production make agriculture a prime candidate for harnessing the potential of automation and the IoT. Real-time data collection is the key to improving yields and making the most of precious resources.

In drought-prone areas, moisture sensors buried in the soil can slash water consumption and ensure none is wasted. Traditionally, farmers will deploy irrigation on a regular schedule based on average weather and soil conditions. But this leads to much of the water draining away unproductively because the crops do not need such a regular infusion.

Soil monitoring makes it possible to target irrigation to where it is needed, when it is needed. Moisture sensors use conductivity to gauge the presence of water in the soil. When the conductivity drops far enough, the sensor can alert a remote control system to the need for water. The necessary irrigation can be delivered using sprinklers, drip or furrow flooding systems.

Moisture levels across a field may vary widely, due to differences in exposure to wind and sun as well as changes in soil composition. To provide the degree of precision required for irrigation, the pumps and valves need to be managed by a control system: opening them and closing them as necessary.

As it is difficult to run cables through fields – and they are easily damaged by ploughing and other typical farming activities – a key requirement for agricultural IoT systems is wireless connectivity. A low power wide area wireless network provides the features needed for farming. A number of existing standards potentially fit the requirements of low cost, reliability and range needed for operation across large fields.

Cellular, LoRaWAN and SIGFOX are potential candidates for networking sensors and actuators across a farm. However, the balance of features points to LoRaWAN being the best overall solution for many applications. Although cellular provides long range, its coverage in rural areas can be patchy. Additionally, data sent over the cellular network will incur a cost based on the amount of data transmitted.

SIGFOX has the benefit of offering flat-rate data plans and is supported by hardware such as ON Semi's AX-SFEU modules. But as a network technology it has limitations. The data rate is comparatively low: between 10bit/s and 1kbit/s. This may not be an issue for agricultural applications where readings will be taken maybe ten times a day per sensor. SIGFOX is also a unidirectional link. This has a benefit in terms of power consumption for sensor nodes: there is no need for them to use power to listen for transmissions. They only activate the RF link when they have data to send. Conversely, actuator controllers would only receive commands.

However, in an environment where farmers have to manage many square kilometres of fields, the inability to query the status of pumps and valves or to perform ad hoc tests on sensors can make maintenance much harder and more expensive. Developed by Semtech, LoRaWAN provides IoT users with the option of accessing the Internet through their own network of base stations to provide greater control, and potentially lower operating costs or through a burgeoning selection of commercial operators. A number of groups are minimising their network-setup costs through the use of crowdsourcing. For example, in the UK, communities in Oxford, Calderdale and other locations have set up LoRaWAN networks to help with flood management. Farmers can easily cooperate by sharing access to LoRaWAN nodes that cover their fields. Such a scheme lets a farmer access data from sensors that are closer to a neighbour’s LoRaWAN router than their own. 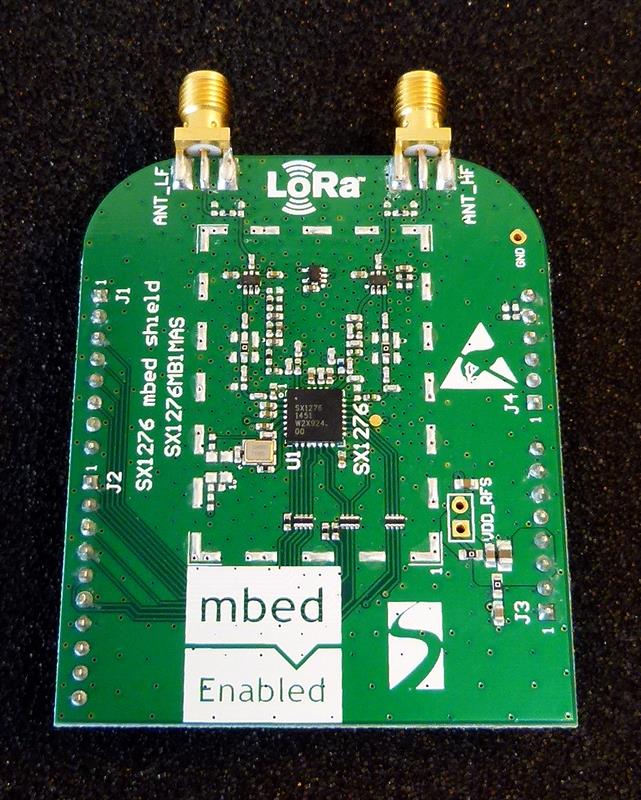 LoRaWAN has support from multiple silicon providers. STMicroelectronics offers a range of Nucleo development kits for the network protocol in addition to Microchip Technology's RN2483 LoRa module and Semtech's own SX127x family of interface devices. LoRaWAN also has the benefit compared to traditional radio systems of offering access to devices buried below ground such as parking water sensors and subsurface irrigation valves. In addition, it has a transmit range on the order of 10km. Resilience to interference from other unlicensed-band users is helped by the use of a spread-spectrum modulation scheme. Achievable data rates range from 300bit/s to 50kbit/s, similar to that of existing GPRS connections.

RF choices may be deployment-specific. Pycom boards fit well here as platforms because there are versions for long-range Wi-Fi, which support distances up to 1km, SIGFOX and LoRaWAN. A fast and affordable way of getting field data to mission control is to set up several battery operated modules connected to soil sensors in the field with a module connected to a Raspberry Pi in the farm, to deliver a real-time dashboard to the farmer.

Another key wireless technology that is making agriculture more efficient is the GPS. The ability to detect position within a field is helping to automate tasks such as ploughing and the delivery of fertilisers and pesticides. Gradually, the industry is moving towards self-driving tractors and robots. But even on manually driven tractors, the presence of GPS makes it possible to operate vehicles over longer hours and when visibility would otherwise be too low to allow activity. Even in good conditions, GPS-assisted steering improves the efficiency of operations by ensuring vehicles remain on-track and avoiding crop damage.

Technology is also enabling high-density and urban farming – with producers turning loft and roof spaces into agricultural spaces. In these environments, moisture and other sensors can, as with outdoor fields, optimise irrigation to ensure more efficient use of water and nutrients.

A key technological change that has made greenhouse farming much more attractive is that of lighting. The shift to high-efficiency LED lighting has made it possible for greenhouse farmers to extend their growing seasons. The lighting can be activated on overcast days as well as at the beginning and end of the day. Compared with traditional light sources, LEDs have the advantage of more easily tuning their spectral output. Purple light has become a popular choice for greenhouse farming, as it provides ample illumination for photosynthesis with low waste. In other cases, green has been shown to be effective for stimulating the production of larger leaves.

One potential issue with greenhouse-based farming is the faster spread of disease among susceptible crops compared to outdoor agriculture. IoT technology can provide the basis for effective disease management. Airflow, humidity and temperature sensors above the soil layer can help ensure conditions are optimal for crop growth but not for the development of fungi, which are often favoured by stagnant conditions.

The rapid detection of disease is also vital and can be handled by airborne drones that fly over the rows of crops to check visually for signs of infestation. When a drone detects a discoloured leaf or another sign of disease, it can send a signal that alerts a member of staff to check on the plant and remove it if necessary. In the future, robots will be used to perform the checks, removals and replantations automatically.

For outdoor farms, the combination of roving sensors on drones and robotic automation will also become increasingly common. It will improve the targeting of fertilisers and pesticides to where they are needed. This will help reduce the runoff of nitrates and phosphates into the water table and the build-up of resistance among weeds.

Thanks to sensor, positioning and networking technology, farming is set to begin its next revolution. It will ensure that agriculture can continue to deliver the quantity of food the world needs with the minimum of resources and pollution.