With connected devices on the rise, it came as no surprise that IoT was a core focus at this year’s Hitex Arm conference held in Warwick. Safety and security took front seat, with speakers addressing the challenges, developments and possible solutions.

Paul Black, Arm Product Manager, looked at how machine learning can be implemented safely in vehicles.

"Everyday drivers demand that cars are better for us and everyone around us and for everyone that will come after us," he said. "To meet such demands, many in the automotive sector have turned to computer control engine management. But as control leaves the drivers hands, choosing the correct complier is vital."

He pointed to a "stable complier" as a must, as it avoids constantly having to completely revalidate and reassess risks. "If there is a defect that could inject a fault into your product, you need to get that – but only that – fixed; and that’s what we do with our qualified complier."

Derived from the ARM Cortex-M AC6.6 release, this complier has been qualified and "hardened", with any changes made being solely vital fixes. This means that although some revalidation will have to be conducted with an updated release, it will be minimal. 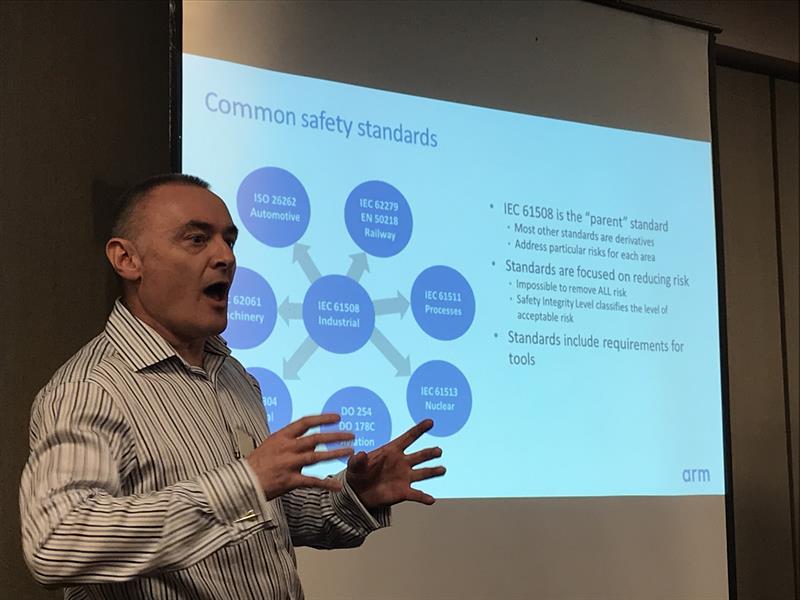 However, to accommodate customers wanting to develop safety products based on new architecture, every two and a half years another safety branch will be created, added Black. The next will be derived from the AC6.13 and will be released Q1 2020.

To make revalidation quicker and easier, Black explained that Arm is also developing a new defect testing method. "We provided a few OEMs with two near identical versions of the same complier, one with a defect, the other with it fixed. The code was compiled through both and results compared. If the results were identical then the code was not affected by the defect, if they differed, it meant you may be vulnerable."

The theme of IoT continued with Murat Cakmak, Founder at ZAYA, urging companies to start preparing for the upcoming IoT standards expected to be released in the UK within the next 5 years. He pointed to pre-existing models that can be used as a base of inspiration to prepare, such as FIPS-140-2 a security standard for cryptographic modules. He explained that preparation will also enable OEMs to consider future additional costs that will come with the standards, for example the investment required to certify a team or the cost of using a third party.

System partitioning has become crucial with the introduction of multi-core systems, he said. Arm’s CMSIS Zone is currently previewing and is set to be released in a few months. The final version will define methods to describe system resources and partition these into multiple projects and execution areas.

And with the introduction of CMSIS NN, Martin said Arm intends to help create the new generation of smart sensors – sensors with machine learning. To do this, the company has organised perceptions (a basic computerised system placed in analogue systems that simulates the human brain to recognise and classify objects) as neural nets which are arranged in layers.

The CMSIS-NN kernels were tested on a convolutional neural network (CNN), trained on the CIFAR-10 dataset, consisting of 60,000 32x32 colour images divided into 10 output classes. The network topology is based on the built-in example provided in Caffe, with three convolution layers and one fully-connected layer.

Note: This story was published in our 11 December issue and Hitex was mistakenly spelt as Hitek.