Foundry revenues thought to have jumped 30% YoY in first quarter

Compared to the previous quarter, however, there was a fall of 2%.

Despite these strong figure, caused in part by weaker figures this time last year, as a result of the COVID-19 pandemic the foundry industry now faces major uncertainties on the demand side, possibly slowing the industry’s future growth momentum.

Regarding the major foundries’ performances in 1Q20, TSMC ranks first in terms of revenue. Some of its 7nm process node capacities have been booked in advance by its clients, providing a steady influx of orders for TSMC. Even with adjustments to some of its wafer starts, the demand from TSMC’s subsequent client orders is projected to fill the gaps in wafer starts, meaning the foundry will continue to maintain the maximum level of 7nm process node capacity utilization.

In terms of TSMC’s 12/16nm process nodes, although the possibility of potential adjustments in 12/16nm wafer starts may not be ruled out entirely, the magnitude of these changes is not expected to be significant, meaning the foundry may still maintain about 90% level of 12/16nm capacity utilization going forward.

TSMC’s production capacities of mature process nodes and special technology are currently fulfilling the demands for 5G, IoT, and automotive products, which contribute to its steady revenue stream.

Samsung is continuing to increase its production capacity for 5G SoC AP, high resolution CIS, OLED-DDIC, and HPC products, while at the same time expanding its range of EUV applications and promoting its 8nm process node capacities, in an attempt to raise the share of revenues from advanced process node products in its total foundry revenue. However, the pandemic has made a serious impact on South Korea, whose domestic market demand may be diminished as a result and is expected to impact Samsung’s 1Q20 revenue performance.

GlobalFoundries has been expanding its 5G, MRAM, and automotive product line-ups with 22FDX and 12nm LP+ process nodes. The foundry has agreed to manufacture wafers at the New York fab it transferred to ON Semiconductor until the end of 2022, ensuring a steady revenue stream throughout the 2020-2022 period. But the total divestment of its Singapore fab to VIS is expected to have a greater direct impact on its 1Q20 revenue.

Owing to growing orders for its 22/28nm process node products, in addition to the new clients and product mixes from its new Japan-based fab, UMC is expected to see quarterly gains in its capacity utilization rate, in turn registering a minor QoQ increase in 1Q20 revenue. On the other hand, SMIC’s capacity utilization rate is sitting at near-maximum levels due to increasing demand in the domestic Chinese market for CIS, PMIC, fingerprint sensors, and embedded memory applications, subsequently contributing to the company’s 1Q20 revenue.

According to TrendForce, as the impact of the pandemic multiplies across Europe and the United States, its effects will most certainly make a dent in the broader economy as well, in turn contracting the global market’s purchasing power. The economic implications of the pandemic on foundry revenue may be increasingly likely to surface in 2Q20, serving as a test for the industry’s strategic capabilities regarding product planning and risk assessment. 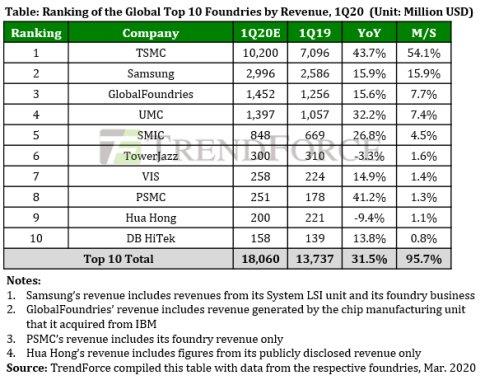 Foundry revenues increase by 20% YoY in Q2, but uncertainty remains

Chiplets to generate $6 billion in semiconductor revenues by 2024

EDA revenues ahead 15% in third quarter