Artificial intelligence expert and tech leader, Loubna Bouarfa, explains how she is embracing diversity in technology for healthcare.

There is a diversity crisis in the AI sector. That’s according to a recent report from the AI Now Institute, a New York University research centre. Large-scale AI systems are said to be almost wholly developed by a small and elite set of university laboratories which are dominated by white, wealthy males.

As a female, Dutch, Moroccan, CEO of an AI data analytics company, Loubna Bouarfa knows she is a minority – or at least, perceived as one.

However, over time she has come to look at minorities a little differently than the rest; and this has been the inspiration for her healthcare-focused company, OKRA Technologies.

“For me, being a minority is not something that is an anomaly anymore,” she said. “When I was younger, perhaps then it felt like a bigger deal – but now, I don’t feel like the odd one out. I don’t feel different to, for example, a man in technology.”

She compares minorities to outliers – an observation point in a dataset which is significantly different to the overall result. In society we try to conform people to averages, she told NE, ignoring any differences – outliers – one may have.

“OKRA doesn’t believe in outliers,” she clarifies. “We have a highly diverse team because we need to design for everyone and that requires diversity. There are no outliers in the company because everyone is an outlier, everyone is special.”

Bouarfa has applied this principle to her work at OKRA, explaining that the company looks at AI and health data differently. “There is no one size fits all,” she says, “but that is exactly the approach that the healthcare system takes. One medicine that is fit for all.

“The current framework for clinical drug trials are very strict,” she adds. “The data that is used to validate a drug is based on the average outcome.” She gives an example, “Let’s say you have diabetes, you may be excluded from a drug study because you’ll bias the results. But in my opinion, that’s not ok. When a drug is launched, it needs to be suitable for everyone to use.”

In other words, a drug may be intended to fit the majority, but is actually fit for a small portion of people because of the way in which it is tested and proven. Bouarfa intends to change this framework so that treatment can be validated on a much wider scale, bringing diversity to the data.

Through AI and partnerships with Life Science companies, Bouarfa explains that OKRA Technologies aims to make medical treatment more tailored. “I believe AI provides us with a framework to predict what the best treatment would be for each patient and what the likelihood is they’ll respond. The goal is to embrace everyone and all of their characteristics.”

Bouarfa says a career in technology was always the plan, but her ‘outlier’ philosophy can be traced back to her PhD days. “I designed an AI system for surgery to predict risk and error in the operation room and suddenly I realised, I could do more. AI could have a much wider impact than in just research and publication. I wanted to make a difference, so I decided to move to industry and establish my own company.

“I knew that if I didn’t start my own company, I wouldn’t be able to achieve what I wanted to,” she admits.

She explains that inciting change has always been a key driver for her. “Those who can make a difference whilst being humble enough to embrace uncertainty and take every day with optimism are the people I am inspired by most.

“I find uncertainty fascinating,” she adds. “I’ve always loved science and technology, but I became sceptical of how deterministic they both are – describing ‘the facts’. When I learnt about AI, I saw a technology that finally embraced 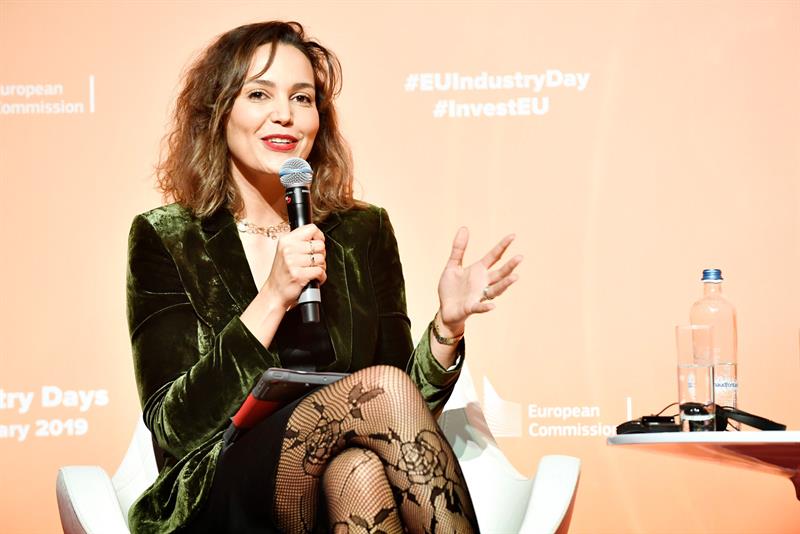 human uncertainty. Like humans do, it looks at the past and predicts probable outcomes in the future. It reflects the human ability to learn and adapt based on past experiences. As we become able to track and predict the outcome of treatments for each patient, we can move from a volume-based healthcare system (meaning the more treatment and pills, the better) to a more outcome-based system, where the final result is our key measurement.”

To enable this outcome-based world she refers to, OKRA has developed a platform which integrates data from various sources, including its pharmaceutical clients and open source materials like demographic and environmental data, into one place. It then organises the data into what Bouarfa calls a “holistic view” about the disease, patient and even the country.

“Once we build that view, we train an AI algorithm to predict outcomes such as, how likely the patient will respond to a certain treatment and what other treatments are available. This is often called precision medicine.”

She continues, “Our clients can ask the system questions in a natural language – typing queries like ‘which clinical commissions group doctors are prescribing this treatment?’ into the platform.”

‘Trust’ was also a key aspect of the technology, Bouarfa tells NE. “Our AI won’t just suggest treatments, but it will give reasons as to why it has suggested them. That is very important – if you have a system which just tells you to do something, you probably won’t listen. But if you have a system that suggests an action and why you should follow it, that enables trust.”

When designing the algorithm, Bouarfa explains that a lot of effort went into not just designing a system which could collate different forms of data into a single place, but also a system which didn’t hold bias. Not just in terms of race, sexuality and gender, but also in terms of the disease. “We have created an AI system which does not prejudice a person with multiple health issues,” she confirms.

As for the future, Bouarfa says the intention is to further diversify and tailor the health system. “My dream is to develop a proactive system that flags people’s risk of disease before the symptoms occur. A future where we don’t have to wait to get sick to get treated – and the treatment is right.”

She continues, “We’re helping a handful of European Life Science companies with decision-making right now, but I want to expand this, so that we’re not just helping single companies, but instead empowering a country by streamlining all their health data into one AI platform.”

Although it’s evident that both the AI and healthcare sectors are lacking diversity, perhaps industry can take a step back and learn from Bouarfa’s progressive approach.

Together, WiE can change the world