What is the difference between FDM and Polyjet 3D printing technology?

Whether you’re buying your first 3D printer or upgrading from one you’ve been running for years, it's important to understand the differences between the two leading printing technologies. Fused Deposition Modelling (FDM) and Polyjet each build 3D models layer by layer, but while the process by which they do this differs greatly, the one you choose to buy will likely be determined less by the technology itself than by the kind of models or tools you need for production.

"If at all possible, you should weigh up the relative benefits of material and output choice and what each can do in terms of durability, flexibility and fidelity to the original design," says Laser Lines' sales director Mark Tyrtania. "Once you've done that, you can narrow down your selection to the machines that fit your budget."

"You might find that a single 3D printer won't do everything your company needs. But in our experience it's often the case that one technology will cover at least 80% of any firm's requirements. The remaining 20% can then be satisfied by using bureau services."

Fidelity and durability
FDM heats a thermoplastic filament – a coil of fine thermoplastic wound on a spool – and extrudes it in a continuous bead of semi-molten material. Once deposited, it cools and solidifies to form a new layer – just one of the many that form the finished model.

As Tyrtania explains: "The result can often be stronger than a Polyjet model, and where Polyjet parts can sometimes minutely change shape over time, an FDM product will be more dimensionally stable."

FDM models are also more robust and, depending on your choice of material, can be made to withstand high temperatures and more demanding working conditions and environments.

There are trade-offs, though, the most obvious of which is the fact that the layer thickness used by an FDM 3D printer isn't as fine as with Polyjet printer. So, where Polyjet allows for smoother surfaces on curves, slopes and gradients, an FDM model will sometimes have visible layers. FDM can therefore be better suited to printing parts that require mechanical strength or other desired material properties.

Polyjet's finer layer resolution is made possible through its use of liquid polymers, which are jetted in liquid form and then cured through exposure to ultraviolet light. The technology's focus is on final product realism, smooth surfaces and fine feature detail.Depending on the material, Polyjet parts can have a range or combination of properties from rigid to flexible; full colour to clear; or even be medically compatible.

This makes Polyjet the favoured technology for concept and form models where the finished appearance is important, such as consumer products and electronics.

Choice of materials
When used for the right applications, Polyjet wins on materials variety, with a choice of more than 1,000 materials and the option to blend multiple digital materials within the printing process. This latter point is an advance in 3D printing technology.

The latest Polyjet J750 uses this internal mixing ability to great effect, with six model materials loaded simultaneously. Mixed material parts, mixed material builds or full colour parts are achievable. Materials used across the Polyjet range also enable modelling of transparent parts (or semi-transparent through mixing), producing flexible models with a scale of rigidity that can match anything from a soft gasket to a vehicle tyre (Shore A 27 to 95).

Yet while FDM isn’t capable of producing flexible parts, its output is often more durable. Parts can be built using heat- and flame-retardant materials and from ABS, ASA, PC-ABS and Polycarbonate. That makes FDM well-suited to producing end use parts or finished jigs, fixtures and tools for immediate use, rather than using it as a prototyping platform.

Where required, either technology can be used in the production of medical equipment, food packaging and kitchen utensils, when supplied with consumables that conform to ISO 10993 ratings.

(Below) 3D printing can be used to make end products, such as the ULTEM robot arm, and not just for rapid prototyping. 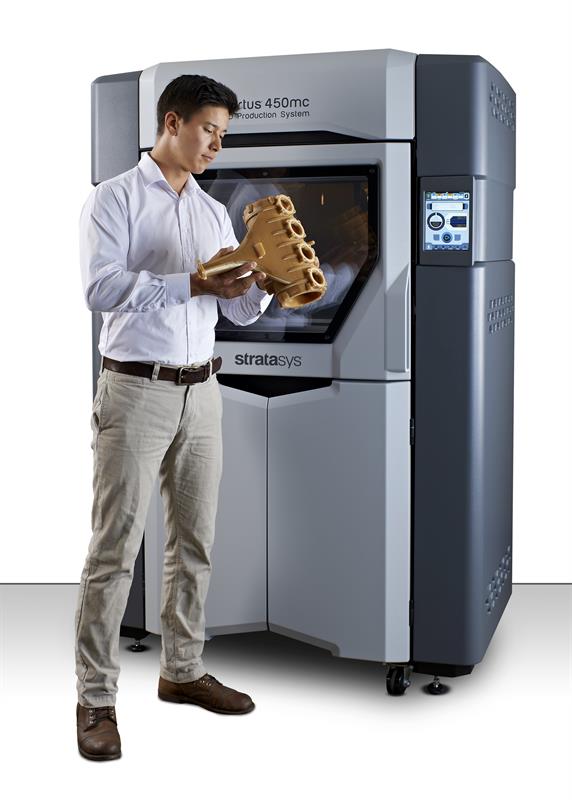 Running costs
The purchase cost of raw consumables is the same, whichever platform you opt for, but the rate at which they are used can vary. The more rigid build of an FDM- model, and the fact it is constructed from material that's already semi-solid at the point of deposition, means it's much better at supporting itself. It therefore requires fewer support structures than a Polyjet part, so the process uses less raw material.

Further, while FDM printers require an ongoing supply of build trays and extrusion nozzles, Polyjet devices may need to have their print heads replaced after every 2000 hours of use, which represents a higher running cost.

In Laser Lines' experience, most printer buyers are looking to run their machines for seven or eight years before upgrading or trading them in, so these small differences should be considered over the course of their service life.

Size and complexity
While Polyjet is the more complex option from a technological standpoint, it's no more difficult to use than FDM. All 3D parts, regardless of the process used to create them, are sent to the printer as an STereoLithography file, or as a Virtual Reality Modelling Language (VRML) file with the new J750 VRML machine, and can be in production after a few mouse clicks.

Neither do the machines' maximum print sizes differ to any significant degree, with each topping out at around 1000 x 800 x 500mm. However, the simplicity of the FDM process means that the printer itself is often a little more compact if you're looking to buy at the smaller end of the scale. If the majority of the models that you plan to produce are no more than 240mm along the longest size, a capable FDM device may be able to sit on the end of a regular desk, while a Polyjet machine will more likely need a work area of its own.

Post processing
It's common for models produced using either technology to require some support structure during the build process – although FDM need fewer of these overall.

Support material needs to be removed, and although FDM has had the edge in this respect for several years, Polyjet is fast catching up.

Depending on the material used to build a model, the support scaffold on an FDM part can simply be snapped off or, if printed using one of the soluble support materials, dissolved in a wash tank.

An equivalent wash process is now available for Polyjet, with a two-step soak and rinse now able to remove SUP706 polymer in a similar fashion to soluble FDM supports. That means that both soluble support options on FDM and Polyjet offer 'hands-free finishing', freeing up the users' time.

Choosing the right printer for you
There are many factors to consider when buying a 3D printer, from the required applications and choice of materials to its overall running cost. In many ways, the initial capital investment is a secondary consideration – and one that can be offset against the printer's long service life, the ability to recoup the purchase through in-house production, and generous trade-in deals when you come to upgrade.

As an area of rapid development, it pays to keep up with the changes in the underlying technology of 3D printing. In our experience, though, the excitement lies not in how it achieves its output, but the way it's changing the way the world thinks about rapid, local production.

3D printing is truly transformational, even at this early stage in its ongoing evolution.

A healthy outlook for 3D printing

What is viable and what is not with 3D printed enclosures

3D printing allows designers to think outside the box

Could 3D printing be applied to PCBs?