A healthy outlook for 3D printing

The healthcare market is adopting 3D printing for prosthetics, implants and medical devices at such a rate that the 3D printing materials market for the healthcare sector is expected to experience a CAGR of 20% between 2018 and 2025. A report by Frost & Sullivan forecasts that the market will be worth $568.5 million (around £450 million).

The use of strong, lightweight materials such as titanium, aluminium, plastic powders and filaments, photopolymers, hydrogel and ceramics, together with the integration of lightweight motors and sensors, are transforming prosthetics. The introduction of 3D printed prosthetic limbs has meant that children can be fitted with limbs that not only look more aesthetically pleasing, but which can be replaced quickly and relatively inexpensively as they grow. One company, Open Bionics in Cambridge, took this a step further with the Hero Arm, a customised prosthetic controlled by sensors which pick up electromyographic signals from the wearer’s muscles which are converted into movements. The Hero Arm can be personalised, with popular themes such as Disney’s Frozen or Star Wars.

Another company, Andiamo, is working to use 3D scanning and printing to replace metal and plastic back braces and hand splints for children. The conventional brace can take up to 13 weeks to be created from a plaster of Paris mould and a prototype – with adjustments required if the child has grown. A 3D scan is a less distressing way to obtain measurements and the 3D printed orthotic can be delivered in one week.

“The increasing penetration of 3D printing technology among medical, dental and the wearable devices sectors is set to augment growth with tissue and organ fabrication one of the most exciting opportunities,” said Dr Leonidas Dokos, Global Director, Chemicals & Materials at the analyst Frost & Sullivan.

Trial and error
Healthcare professionals are also using 3D printing for surgical guides, used in dental implants. A surgical guide is used for planning the implant operation. It is traditionally created using radiography to show the patient’s jawbone density to determine the position and angle of the implant. Using 3D computer aided design (CAD) software and a 3D printer, the patient’s mouth and jaw can be more accurately mapped to allow the dentist to accurately plan the angle of drilling and placement in the mouth’s confined cavity.

One of the challenges for 3D printers in healthcare is the accuracy of the printed object. Stratasys’ PolyJet technology is particularly suited to medical applications. It produces smooth, accurate parts with microcscopic layer resolution and accuracy down to 0.014mm.

It has been used by Surgical Implant 3D to create accurate surgical guides in 48 hours, rather than the three weeks delivery time using the stereolithography (SLA) 3D printing technique.

Nicolas Jager, Founding Partner at Surgical Implant 3D explained that the SLA parts had a resolution of 150µm layers and an optical scanner provided a virtual 3D moulding of the mouth to an accuracy of 5µm layers. “As a result, the surgical guides did not always fit precisely in the patient’s mouth and, in the worst-case scenarios, their instability during surgery made drilling work less accurate,” he said. 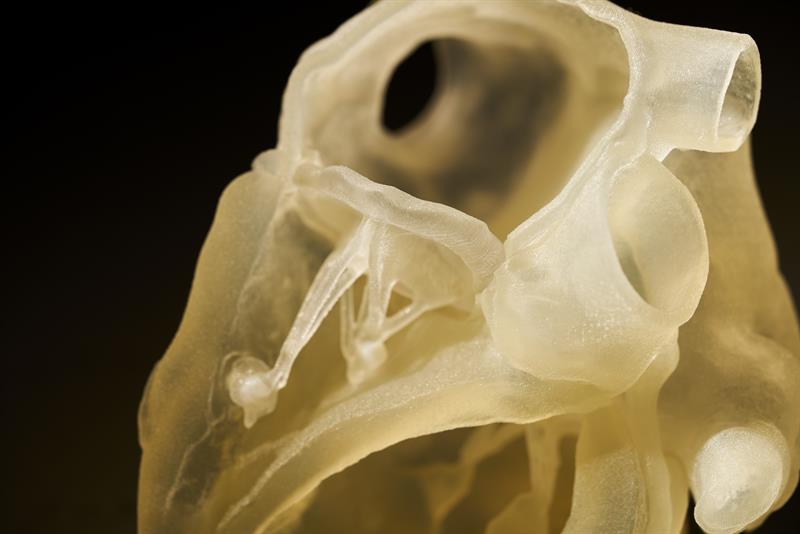 It prints medical models that replicate the feel and biomechanics of human anatomy, rather than using cadavers or animals. The former cannot retain the feel of live tissue and need to be kept in a controlled environment, the latter can only approximate the human anatomy.
The printer recreates the actual tissue response, says the company, to allow users to focus on specific pathologies. The organ and bone models produced will be used by medical students and professionals and will also help device manufacturers improve design with validation, usability studies and failure analysis on responsive models.

Testing before its release earlier this month included recreating vascular components at the Jacobs Institute in Buffalo, New York, USA. The medical innovation centre used it as part of its research. “The final frontier for organ model realism has been live-tissue feel and biomechanical realism,” said Dr. Adnan Siddiqui, the institute’s Chief Medical Officer.

“TissueMatrix is now the softest 3D printed material on the market and can be used where tissue simulation is required, such as skin, cardiac pathologies, organs, intervertebral bodies,” he told New Electronics. “GelMatrix can be used as a support material where fine internal diameter (<1.5mm) models are needed, as you would find with small veins and arteries, while allowing simple post-process cleaning,” he continued. “Anyone who has post-processed neurovascular models knows how manual this process can be and we have seen post-processing reduced by as much as 80% using Gel Matrix. Gel Matrix can also be used as a building material for solid models such as organs.”

The third material, BoneMatrix was developed to replicate “not only the external features of bone but more importantly, the cortical and cancellous characteristics,” said Drikakis. “Cortical bone is the thick, hard, strong outer surface of bones, while cancellous bone is spongy bone. With the GrabCAD Digital Anatomy Software, we use our proprietary voxel based slicer to automatically generate the microstructures of each bone as you would expect to see in the human body. The user can then modify the characteristics to replicate the desired patient demographic as needed,” he added.

The printing time for each model depends on variables such as model size and density. It takes around six to eight hours to print a standard heart model and 15 to 17 hours for a model of a femur, with standard trabecular bone, cortical density and medullary canal, Drikakis confirmed.

The printer was created for customers to use existing library files while also providing them with the flexibility to alter the models, based on feedback from clinicians or product developers. “As a result, said Drikakis, “the Digital Anatomy Printer allows the medical community to print any anatomy and pathology.”

A healthy future
Materials advances and increased micron-level accuracy in printing technology are likely to accelerate the take-up of 3D printed medical devices and aid.

For widespread adoption, however, regulatory issues around the world need to be made clearer so that 3D printed healthcare objects can be produced on an industrial scale.

“One of the biggest challenges facing 3D printed healthcare product manufacturers has been the scarcity of qualified and compliant materials fit to be deployed on the human body,” said Dr Dokos.

“FDA regulations pertaining to 3D-printed healthcare products is a major challenge across the value chain,” he warned.

What is the difference between FDM and Polyjet 3D printing technology?

Could 3D printing be applied to PCBs?