As the demand for EVs accelerates so the need for an effective power charging infrastructure becomes critical.

Last year Norway became the first country in the world to see the sale of electric cars overtake those of petrol, diesel and hybrid vehicles. Battery electric vehicles (BEVs) sales made up over 54 per cent of all new cars sold in 2020, up from over 42 per cent in 2019.

Just ten years ago, according to figures from the Norwegian Road Federation, sales of EVs accounted for just 1% of the overall market, so 2020 has seen significant steps made in phasing out of petrol and diesel vehicles.

Sales of electric vehicles (EVs) around the world are expected to continue to grow rapidly in 2021, according to industry analysts and car distributors, as more models are brought to the market.

In the UK the Government’s ‘Road to Zero’ strategy envisages ending the sales of petrol, diesel and hybrid vehicles by 2035 and includes providing grants to make electric vehicle ownership more affordable. It is also looking to off-set the costs associated with installing charge-points in the home, workplace and on-street.

This acceleration in sales of EVs has raised some serious questions as to whether the charging infrastructure required will be in place and able to cope with the level of demand a 100 per cent EV market would be likely to place on it by 2035.

With the continued technical improvement of electric vehicles, especially with respect to battery capacity and charging time, it’s critical that a network of charging stations that are able to make charging easily accessible are available to consumers.

Data produced by the European Alternative Fuels Observatory shows that in the UK in 2019, the number of EV charge points per 100km of road was around 570 and that will need to be increased significantly.

“The EV infrastructure market is seriously lagging behind the EV market,“ said Dunstan Power, Director, ByteSnap Design. “While we are seeing exponential growth in vehicle sales, both here in Europe and in China and the US, we will need a significant acceleration in the deployment of charging points.”

The UK government expects that most charging will take place at home, in what it describes as a ‘key attraction’ of EV ownership, and it has committed £400m to the public-private Charging Infrastructure Investment Fund to accelerate the roll out of charging points in domestic settings. But building out this infrastructure, including chargers, grid gear, software and communication networks, will be a significant challenge.

“The electrification of transportation is being held back by the slow pace of electric vehicle charging infrastructure deployment,” argued Power. He continued, “There are two distinct forms of chargers. The first is a destination charger. Effectively, as the government has identified, most charging is likely to take place in people’s homes or at places of work. That market is dominated by suppliers who are in what can only be described as a ‘race to the bottom’. The quality of the chargers, compared to five years ago, has dipped and that is being driven by house builders and installers looking to drive down costs.

“As a design consultancy, we are finding plenty of customers having to make chargers as cheaply as possible as chargers become a site requirement in new house builds.”

The other form of charging is associated with en-route chargers.

“They will need to be fast if they are to be effective,” explained Power. “There’s currently a dearth of high speed DC chargers available and we’re now seeing the likes of Shell and BP getting involved, rolling out charging points at existing petrol stations. But it’s slow going.”

The UK government announced in 2020’s ‘Spending Review’ that it would be allocating £1.9bn to charging infrastructure and consumer incentives to support the rapid roll out of EV charging points at service stations across the UK, and to support charge point installations at homes, workplaces and on-street locations.

The need for electric vehicle charging gear is a defining market opportunity for many leading companies in this space and it was described as, "a tsunami that is happening right now," by John DeBoer, head of Siemens' eMobility and Future Grid Business Unit.

“Reliability and availability are critical issues and need to be addressed in order to inspire consumer confidence,” suggested Power.

“The UK has, however, a very fragmented market with a spread of AC and DC chargers which will make it hard to deliver automatic charging and payment. The market comprises of multiple charge point providers offering a combination of AC and DC chargers. It is fractured with different installation options; there’s also limited standardisation with users having to contend with different networks, interfaces, payment processes and apps.”

Research has shown that consumers want more public charging to enable them to undertake longer journeys and according to the government, its policy is to make it easier for drivers to locate and access charging infrastructure that is affordable, reliable and secure.

Power suggested that en-route public charging may not necessarily, however, be as critical when it comes to driving the take up of EV vehicles. 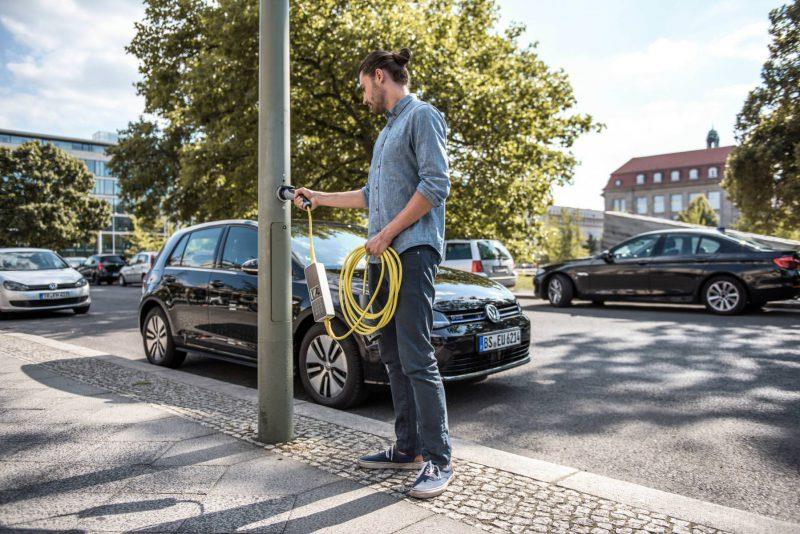 “While charge points are unevenly spread across the UK I think the anxiety over range is somewhat ‘overblown’. Range for drivers of EV’s doesn’t tend to be a ‘big’ issue. Put in context, while battery range is improving, it remains expensive. Larger batteries are coming to EVs, with 50-60 KWh becoming the norm, but do consumers really need these expensive batteries when most drivers only cover around 17 miles per day; in London that figure is just 7 miles. This issue of range, in my opinion, may not be as critical as some believe.”

Trials of cutting-edge induction pads have been taking place across the UK and involve pads, which are sunk into the ground, that are able to pump out an alternating electromagnetic field which can be converted into electricity when a vehicle is parked on top.

A growing number of automotive manufacturers are including induction charging technology in new models but, at present, there are only a few induction-enabled electric vehicle charge points available.

The Government is, through its Electric Vehicle Homecharge Scheme, looking to provide grant funding to encourage the roll out of domestic charge points but again, as Power already mentioned, there is an issue around quality.

“When it comes to chargers what we are seeing is a race to the bottom. A lot of companies are attacking the domestic market with single socket low cost chargers and we are seeing a growing number of customers asking for help with bespoke designs,” said Power.

“Off the shelf EV charging solutions are saturating the market, but fall short. We’ve seen a sharp increase in incoming enquiries, and most are from companies where basic chargers do not meet specific requirements, perhaps due to software, communications, timing issues, UI compatibility or the configuration of load sharing.

“Too many chargers lock customers into long term contracts and when you look at the demands of particular use cases their needs are not being met by these mass produced, off-the-shelf designs,” said Power.

According to Power, charger manufacturers would like a comprehensive networking protocol between the charger and the car, but the IEC 61851 and 62196 specifications have led to a plethora of (crude) PWM, CAN bus and IP over Power communications along with incompatible plugs.

ByteSnap has responded with a new electric vehicle (EV) charging division – Versinetic – that’s targeting the UK and EU markets with an EV charge point design solution based around versatile ‘Charging Blox’ conceptualised product and service module that can be configured to precisely match customers’ requirements.

According to Power a growing number of companies want to create their own unique chargers, so ByteSnap helps them develop the electronics and software necessary to support EV charger development, including smart charge point communications.

ByteSnap uses RAY, which brings together Open Charge Point Protocol 2.0 (OCCP) with multiple communications protocols, making it possible to take care of identification, authorisation and charging cycles – it is also possible to communicate directly to a back office or building management system to allow for local load balancing of the power.

With the growth in electric vehicles on our roads electricity demand will place growing pressure on the UK’s Grid Network, so the ability to meet demand and manage load balancing will become increasingly important.

“ByteSnap is part of an Innovate UK funded consortium which has developed a new communication and control platform for Vehicle-to-Grid/Building (V2G/V2B) systems that are able to control how, when and the rate at which electric vehicle batteries can be charged/discharged and take into account local substation constraints and EV/building energy requirements,” explained Power.

“This form of charging will become an essential part of the power network in the next few years,” suggested Power. “It addresses the issue of renewable energy becoming the predominant power source, especially when it comes to how you store it - electric vehicles will have an important role to play here. V2G means that vehicles and buildings will become power stations in themselves – a supermarket could, in effect, become a mini power station.”

The proliferation of EVs will certainly add demand to the Grid, however smart charging could be used to reduce charging at peak times and vehicle batteries could become an asset to the National Grid and be used for grid balancing.

“The National Grid is a hugely expensive piece of infrastructure and while it’s not a sustainable model going forward, by mixing smart charging with scheduled charging it should be possible to meet peak demand, without having to redesign the Grid.”

According to the National Grid smart charging could be used as a mechanism to help balance supply and demand, and by using EVs it could be possible to store up to 20 per cent of solar power generated in the UK. In effect EVs could help to accelerate renewable power generation.

Owners of EVs do tend to do most of their charging at home so this creates a barrier for an EV owner that doesn’t own a home with a garage.

“An individual house in a street might need to be replaced with a secure multi-storey car park with built-in charging facilities. The infrastructure stays in one place so it's much cheaper to implement, upgrade and maintain; streets are cleared of EVs; the car park provides security, V2G facilities and load balancing,” suggested Power.

Fully automated charging is the ultimate aim, perhaps in the form of robots plugging in charging cables, but more likely through inductive charging.

EVs are a rapidly accelerating, disruptive market; and charging technology and infrastructure will be as critical to their deployment as the vehicles themselves.

The challenge for UK government and industry, and for other countries around the globe, is to not only drive the development of EVs but also the charging infrastructure and supporting systems to make EV driving as effortless and attractive as a petrol or diesel vehicle.

Future adoption rates are going to be contingent on the evolution of a charging infrastructure, that’s both public and private, and while there are a number of fundamental issues to address once the infrastructure is in place it will be possible to pave the way for a host of new products and services.

End of the road?

What's the impact on the UK's EV industry by bringing forward the ICE ban?