Reshoring from an offshore perspective

This is a truism that has underpinned global electronics since businesses first started shipping out work in the 1950s, and especially since the use of suppliers in the far east became standard practice from around the 1980s onwards.

It’s a strategy that’s been hugely successful, allowing businesses to build products quickly and cheaply, freeing up time for other important, time-consuming work like research and development. But recent shifts in the market are making it harder to justify and now many are weighing up the benefits of reshoring.

This is hardly a new issue. Bringing manufacturing back ‘home’ has been on the agenda for decades, given either direct government support or at least the nod of approval from those who’d like to see more products built and shipped from the country in which they were originally designed. It also has its fair share of critics, who argue that businesses can only realistically compete on quality when going up against well-established Chinese factories with much lower labour costs and faster turn-around times. These advantages have remained largely unchanged over the years, leading many to conclude that reshoring is principally a political project without any real business merit.

It's true that outsourcing is now a very different prospect when compared to the early days, especially when it comes to PCBs. Quality has improved, both in terms of components and overall build, manufacturing cycles are more consistent, and OEMs will often work closely with partners to establish better traceability.

However, communication and time-zone differences continue to be a challenge – issues that have been brought into sharper focus since global supply chain disruption began to bite. It’s difficult to say whether these pressures will result in a sea change for the industry, but it’s clear the case for reshoring has rarely been stronger than it is today.

Part of the change is down to tensions beyond the industry’s control. The US, for example, has been engaged in a trade war with China since 2018, with billions of dollars in tariffs being imposed on goods from each country. This conflict is driven by much bigger issues outside of the electronics industry, but the recent semiconductor shortage has nevertheless convinced the US government to act.

In January 2022, President Biden announced Intel would build a new $20 billion semiconductor factory in Ohio to shore-up domestic supply and limit US businesses’ dependency on foreign suppliers. This announcement follows passage of a House bill that, once passed, will secure $52 billion in funding for chip production and advanced domestic manufacturing techniques.

This is just one example, but it highlights a mood that can be felt beyond the world’s largest economy.

Research from the UK also shows there was a growing appetite for reshoring long before the pandemic began to reshape traditional business models. A Lloyds Bank sector report from 2019, for example, found that 37% of manufacturers had already moved operations back home or were planning to over the next five years.

Almost 60% of businesses polled said the pandemic had ‘exposed weaknesses in the supply chain’ and work should now be brought closer to home, while 32% said reshoring should be focused on ‘critical supplies’. Given the highly connected nature of today’s economy, and the presence of electronics in many first-response items, it’s fair to assume PCBs now fall within this category.

Some of these figures might come as a surprise, not least because outsourcing is still clearly preferred by the majority of OEMs. But the advantages that made it so appealing for businesses in the 1980s and 1990s are no longer as clear cut. Back then, low labour costs were commonplace, popular manufacturing sites were unlikely to change, and more competitive production costs far outweighed the potential downsides of moving work overseas. Today, though, those assumptions do not hold as firmly under closer inspection. The economies of countries with popular outsourcing locations have grown rapidly in the intervening years, which has driven up costs and closed the gap with historically more developed nations.

At the same time, manufacturing has become more capital-intensive with the use of additive manufacturing and other time-saving technologies, in turn reducing the overall importance of labour in cost evaluations. 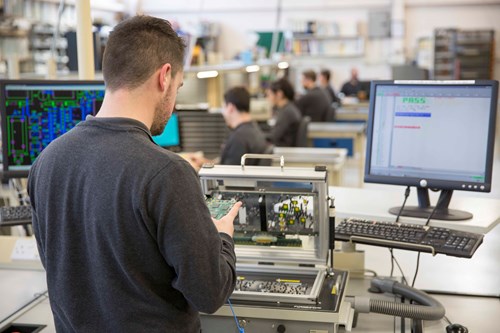 Another key point is the relatively new trend for businesses to evaluate the ‘full cost’ of production door to door – a move that directly supports the case for moving manufacturing closer to the point of demand, where innovation and the adoption of new production techniques can be applied quicker when compared to contracts that are sent abroad. This argument is persuasive but there are other key points influencing OEMs’ decision to reshore, particularly when it comes to PCB assembly.

Arguably the most important factor is the greater control businesses, and their subcontractors, have when all operations are domestic. Improvements to a PCB design can be made quickly when engineers are working in closer proximity, with a lower chance of miscommunication when time-zone differences and language barriers have been removed. This capability has been a competitive advantage for businesses since factories put many important parts on allocation. Offshore Electronics, for example, has used its in-house knowledge to source credible alternatives for customers, circumventing the long lead times that have put even household brands on pause for much of the last two years.

Quality control is another area where reshoring can pay dividends. It’s true that many far east facilities boast a high standard of workmanship, but it’s not always guaranteed. Some may have access to better components and teams, while others may even be using the grey or counterfeit market alongside low-skilled workers to keep costs down. Ultimately, products cannot be shipped if boards arrive with obvious build errors or substandard components, adding further delays in a market that is already experiencing huge backlogs and losses running into the billions. This is not only inefficient but undermines the reasoning for offshoring work in the first place.

Domestic suppliers, on the other hand, tend to work with vetted factories that must meet minimum QC and workplace standards before pitching for tenders. Offshore Electronics’ approach offers a good case in point, with the company only sourcing parts from a network of approved factories that comply with ISO 26000. Working this way may sound counterintuitive, especially during a supply squeeze, but it has given customers the assurances they need to place orders months or even years ahead.

While advantageous, these points still overlook how reshoring can tackle some of the basic issues posed by sending business a long distance overseas in a post-pandemic environment.

Air and sea freight, for instance, are now significantly more expensive when compared to 2019 and volatility in the raw materials market shows no sign of abating. Both are evening the playing field, with the remaining cost savings for outsourcing in the far east being counterbalanced by some of the benefits discussed earlier.

Whether this situation will further reshoring’s cause or, at least, lead to more ‘nearshoring’ is still up for debate, though it’s now clear the cheaper option doesn’t always equate to what’s best for business.