FPGA technology has seen a significant change in the last two decades. From relatively simple devices used mainly as glue logic and for last minute board fixes, FPGAs have evolved into highly complex parts.

The two leading developers – Xilinx and what was Altera – have recently taken advantage of leading edge process technology to create devices with serious levels of performance. While Altera – now part of Intel – has developed the Stratix 10 family of SoC FPGAs, Xilinx has created the range of MPSoCs.

Each approach has its benefits to product developers, but Xilinx’ UltraScale+ parts seem to have caught the collective eye of those developing VPX and similar format boards, with a flurry of announcements over the last few months.

Claiming to be first to market with a VPX format board featuring an UltraScale+ device is Swiss based start-up Panateq. CTO Panou Pabouctsidis says, although the company is less than a year old, it features ‘passionate people with experience of designing hardware platforms in many form factors, including VPX. “We started working on VPX format boards to see what we could do. While it’s not easy to break into that particular market, we saw an ‘open window’ to implement UltraScale parts.

“We are proud to be the first to bring the power of UltraScale to the 3U VPX format,” he said.

He sees the plug in board market as being competitive. “But most companies are providing single board computers (SBCs), while there are also a lot of FPGA based products. Our board – the VPX3-ZU1 – is a mix of the two; and this is interesting for those companies looking to access the two technologies on one board.”

With a similar outlook is Haydn Nelson, director of marketing for 4DSP, recently acquired by Abaco Systems. “Traditionally,” he said, “users would have an SBC running an Intel processor, plus an FPGA board. With the benefit of integration, some applications can run on one board, reducing size, weight, power and cost.”

4DSP has been designing boards based on VITA standards for a while; starting initially with PMC and AMC cards, then FMC. “We brought that expertise into VPX,” Nelson explained.

One of 4DSP’s more recent developments is the VP880. “It has dual FPGAs,” Nelson said. “There’s a Zynq UltraScale MPSoC, with the hardened processor cluster, and a Kintex UltraScale, a more traditional FPGA with some hardened blocks.”

VPX format boards have proven to be more popular for military and defence related applications. “Board cost isn’t that important in these applications, because the end product will be expensive. However, it’s not always so good for cost sensitive applications,” Pabouctsidis noted. Nelson agreed, adding: “Some industrial apps don’t always need the performance that VPX boards can bring to bear.”

Nelson also sees VPX boards as being a ‘good match’ for mil/aero applications. “So, while we’re seeing uptake in that sector, we also see some interest from industrial researchers and we’re getting into National Labs in the US. One application there is for proton accelerator beam alignment, but commercial applications include aircraft, where the low size, weight and power plays well.”

VPX, of course, can be seen as a successor to VME. Pabouctsidis said: “Those who were using VME needed more speed, but also a rugged solution which was reliable in terms of vibration. VPX was developed to meet those application needs, unlike xTCA, which came from the commercial world.”

Pabouctsidis believes UltraScale+ represents a major improvement in terms of architecture. “It has a more powerful core – four Cortex-A53 processors – and it integrates a GPU. So it also offers graphics capability, which is good when you need a video output to drive a screen. There’s also more I/O, a large amount of programmable logic and a high speed SERDES.” 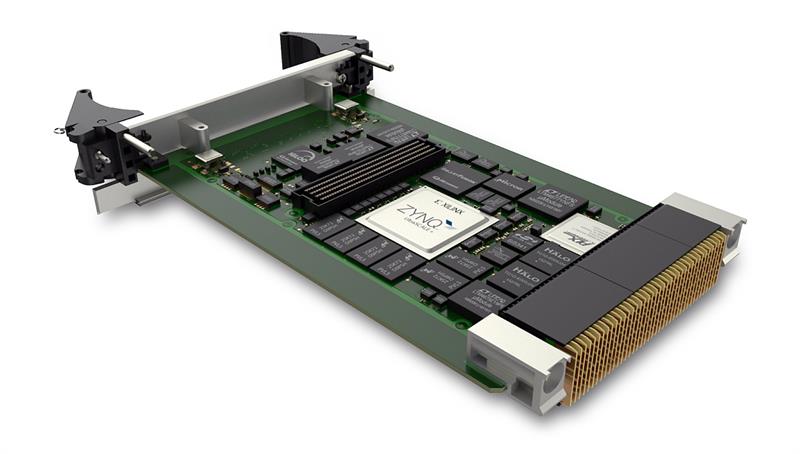 Nelson pointed to a couple of areas where UltraScale provided the necessary features. “If you look at radar and software defined radio,” he said, “applications are beginning to need things like multichannel transmitters and receivers. These allow you to use multiple channels simultaneously and, because you have more precise control, it opens up features like digital beam steering. This is becoming more popular than omnidirectional broadcast.”

He also pointed to commercial wireless. “With 5G, you could need an instantaneous bandwidth of 1GHz. From a digital architecture perspective, that means faster data rates and faster data sampling. But, along with multiple data streams, there’s the need for more signal processing in the FPGA.

“UltraScale+ is good for a couple of reasons. While it brings closer real time control of signal processing architecture on the FPGA, some algorithms better suited to running on a general purpose architecture.”

Pabouctsidis added that three UltraScale variants can be housed in the same board footprint, bringing flexibility. “If you use the 15EG variant, for example, you get access to 3500 DSP slices – and that’s going to very interesting for those who need a lot of DSP functionality. It is like having a Virtex-7 available.”

Nelson picked up on some other aspects. “Zynq is good because it has an FPGA element, plus the quad core processor. And the processor cluster can be set up to operate independently or in lock step mode for safety critical applications. The presence of a GPU makes the device attractive to those developing robotics applications, while TrustZone is important for data protection.”

Yet, despite the advanced functionality available from UltraScale parts, developers such as Panateq and 4DSP still need to design in FMC connectivity. “It adds flexibility for the customer,” Pabouctsidis explained. “You never know what the customer want to do with a board and an FMC slot increases the number of applications they can do using the same platform.”

Nelson noted: “The VP880 is flexible because of the FMC interface. A modular approach means customers can buy the card, but can swap out the mezzanine card in the future without having to redesign their system or software.”

Having a powerful board is one thing, but developing it is another. “You can’t use all this technology if software isn’t available,” Pabouctsidis concluded. “The architecture is supported by Xilinx’ SDSoC tools, which help with partitioning algorithms. Developers can see almost in real time which is the best way to implement their software – in the SoC or in the programmable fabric.”