The challenges associated with meeting the needs of customers are now extending more deeply into the production process, as Jakob Dück explains.

One of the most significant challenges when it comes to manufacturing technology is how to serve the wishes of your end consumers and those challenges are now increasingly extending into production technology.

Individualisation can’t be achieved with the tool kits associated with conventional mass production, so there are growing calls for a completely different design of production processes, including machines and systems.

The individualisation of mass production is one of the core aspects of Industry 4.0, so the question is how should the processes for "individualised production" be shaped and designed so that the costs don’t soar?

According to KUKA, a robot manufacturer, customisation requires a high degree of standardisation and automation, which at the same time affords the scope for variations in terms of customer-relevant product features. Modularisation, which provides customers specific, tailored product configurations based on a modular building block system, is seen as a cost-effective way to meet individual customer needs.

When it comes to modularisation, interfaces are a vital component as the degree of automation rises and modularisation deepens, and they play an increasingly critical role as the link between the elements or modules - without interfaces the modules will never become a whole!

In some instances standardised interfaces and in others "individualised" interfaces will be more advantageous but in order for OEMs to determine the right degree of individualisation for their machines and to bring them into line with the different automation and modularisation requirements along the life cycle, it is necessary to think in terms of different "clusters" or functional groups.

The development of electronic components has enabled a tremendous compression of functions and higher energy efficiency and greater packing densities go hand in hand with these developments. The technology boost in this cluster is encountered in many places in the production system: in the process-integrated acquisition of input parameters and signals, in the

on-site pre-processing of this input data, in the energy-efficient triggering and control of actuators, in image processing and reproduction, as well as in the touch functionalities of the operating units.

On the one hand, this technological progress drives the decentralisation, modularisation, and the scaling of machines. On the other hand, thinking in terms of ever more compact building blocks and elementary functions is becoming necessary, and the initial input and efforts required to develop such systems is increasing in importance.

The advantages of customer-oriented individualisation of the product range in mechanical engineering outweigh the disadvantages as the appropriate overall arrangement of sensors, actuators, and other machine control components, as well as the interconnection of the functions and processes based on them, are absolute OEM domains. These companies alone hold the comprehensive system competence and these are the key assets they can leverage to their advantage.

There are similar significant and far-reaching shifts here. While know-how was at the core of mechanical development in the past, in recent decades it has migrated almost entirely to software departments or electrical design. Due to the enormous increase in performance of the technologies for electronic drive controls matched with decreasing prices at the same time, entirely new concepts for machine and production plants have emerged. The function group for the complex control of the motion sequences and related processes also forms a central competence of machine manufacturers.

It is noticeable that the manufacturers of manufacturing systems are concentrating on a few technologies in their development activities. The generalist perspective remains with the overall system suppliers, whose know-how resides precisely in the application and connection of technologies. With regard to the question of the right interfaces, however, it is precisely the highly specialised technology units that are of interest. A common, defining aspect of these functional groups is the fact that they are deployed as finished units or aggregates with firmly circumscribed physical and technical functions and precisely defined interfaces. The linking of the units represents the central OEM know-how, not the components used themselves.

This term is omnipresent in today's technical literature and other media and comprises many aspects, but applied to interfaces in mechanical engineering, it refers to data transmission technologies. Data transmission in the form of industrial bus systems and as Industrial Ethernet has long been shaped and used by the players in manufacturing technology. The possibilities of cost-effective data connection to higher-level systems up to the cloud with ever greater data throughput and real-time capabilities, however, are genuinely revolutionary in technology terms. These technologies would enable OEMs active in the mechanical and plant engineering sector to reshape their entire business approaches: Different manifestations of these changes are described and designed under the heading of Industrial IoT. All data transmission aspects, including industrial buses and industrial Ethernet, are considered here from the perspective of interfaces as a functional group or functional layer. While the solutions in this area are not part of the OEM's core competence, they hold the greatest potential for change in today's manufacturing systems.

When it comes to the interfaces required in modern control, drive, HMI, and communication technology for production systems at work in all branches of industry, it makes sense to use individualised or customer-specific electromechanical interfaces for the functional groups, which largely represent the core OEM know-how.

Customer specific, tailored interfaces are most often used for those modules and aggregates that are developed or manufactured directly by the respective manufacturer. This applies to all degrees of product individualisation in mechanical engineering - from "soft customisation" through the various stages of "hard customisation" to one-of-a-kind productions.

With regard to sensors and actuators, the typical interfaces for the respective industry sector are usually opted for. Trendsetters and innovators, however, do try to set themselves apart from the market by deploying specific, tailor-made interfaces.

When it comes to data interfaces, machine manufacturers rely entirely on standardised solutions. This applies both to the industrial bus and Ethernet connections employed and to all other forms of digital data transmission.

In terms of data transmission, it is evident that both Industrial Ethernet and bus systems in the manufacturing area and the higher-level data interfaces are subject to tremendous change. The technologies deployed are largely determined by the suppliers of the control components. Therefore, the recommendation for production system OEMs is that, as far as possible, these interfaces should follow the latest standards of the control technology employed and ensure the modularity and scalability of the machines and systems.

With regard to interfaces beyond the machine edge - e.g. for connection to higher-level systems - the interfaces should always represent the advanced state-of-the-art. Consequently, as an OEM, an economically and technically optimally designed system for current requirements is in place; a system that is at least in part capable of meeting future (as yet unknown) requirements. Moreover, company will then also be ideally equipped for the continuous expansion of after-sales and service activities based on digital services.

The key reasons being that there are: end user requirements who operate specific production lines and want to consciously differentiate themselves from individual suppliers or focus on them; differentiation vis-à-vis competitors in the expansion of business models to offer after-sales, service and similar services aimed at a long overall life cycle of production systems; individualised interfaces allow these services to be controlled and expanded in a user-friendly manner; intentionally non-standard design of machine interfaces or equipping technology with specific interfaces in order to stand out from the competition.

In particular, OEMs that perceive themselves as technology leaders, innovators or trendsetters are taking advantage of these opportunities and the use of sensors/actuators or their combination developed according to specific specifications of individual manufacturers - in these instances, too, the protection of one's own know-how is the strongest motive for leveraging individualised interfaces.

HARTING is able to customise the electromechanical interfaces needed to meet even the most unusual OEM requests for interfaces in the mechanical engineering sector. 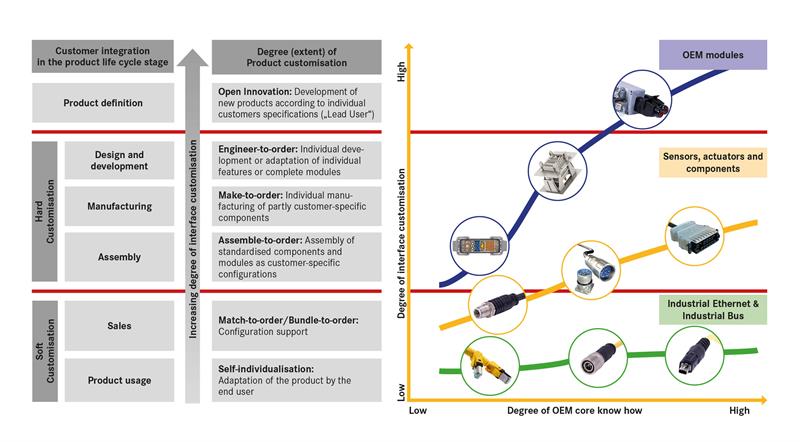 Above: Understanding the degree of customisation that is required

For example, most of its connector products can be combined with different housing types. Cable entries and imprints on housings can be freely configured and custom ordered via online configurators; many existing contact inserts can be designed customer-specifically; contact inserts of most standard connectors can be provided at individual locations with coding pins instead of contacts; while instead of fixing screws, pin and socket combinations can be used which have a coding function, these can also be provided with special heads.

Also with regard to data transmission, where standardisation places great emphasis on the transmission characteristics of the entire interconnections and routes at work, there are options for the customer-specific design of interfaces. By means of standardised preLink contact blocks at the respective end of the data line, suitable connector types for different ends of the data lines can be realised in terms of the respective protection types required. In this way, sub-routes can be designed that are precisely tailored to the end-user environment:

At the highest level of "hard customisation", customer-specific interfaces are developed to meet individual customer requirements - with the aim of meeting even the most "unusual" customer wishes in mechanical and plant engineering!

Outlook 2016: Rising to the challenges