​The ability to send an electric current through the air, from one location to another, may not be a new idea but it has certainly taxed the minds of engineers for many years – that is the ability to transmit power wherever it is required and without the need for wires.

A number of companies have been working on over-the-air charging, among them Pasadena-based GuRu Wireless, a start-up that has developed a number of innovative prototype devices that are able to transmit electricity without the need for wires.

It does this by remotely powering devices by using high-frequency radio waves. GuRu demonstrated its technology at CES earlier this years and showed how it could be used to charge up devices from smartphones to IoT devices.

Founded by a team of Caltech engineers and scientists it uses mmWave to transmit power directly through the air, at distances of up to three feet or more, by using a proprietary 24GHz “RF lensing” technology that can be applied to charge several different devices at the same time.

By operating in the mmWave spectrum it should be possible for engineers to create much smaller devices and a more efficient power transfer. The company’s smart lensing technology enables the use of focused energy beams for power transfer, pinpointing specific targets for power delivery rather than flooding an entire room with wireless energy-power. So power, where you want it and when you need it, as the company says.

Bohn quit his job as a Caltech scientific researcher to work full-time on the technology and to set up GuRu.

“The foundational research had been going on for over 20 years,” says Bohn. “We founded the company to commercialise the products coming out of this research and do so at scale. We were able to raise venture capital in 2017 to fund the business’s development.

“The commercialisation of the technology is moving at pace,” he says. “We certainly benefitted from appearing at CES. The reaction was very positive and we generated a lot of new leads. We are now working with different companies and vertical markets developing engineering prototypes for, among others, the automotive and consumer spaces.”

A smart piece of kit

GuRu’s wireless power modules include transmitting and receiving antennas and are, according to Bohn, fully scalable, customisable and cost effective.

“Our technology allows for dynamic sensing and tracking of devices; the automatic alignment of power needs with a specific device and the ability to power and track multiple devices,” he explains.

“The generator unit is the source of the power. We use mmWave energy in a controlled function that allows it to be sent to a specific location. The generator unit constantly monitors its environment and in doing so is able to change the way in which the energy is sent and to which devices by tracking them.

“Our recovery units collect the energy, taking those mmWaves and converting them into dc energy,” he explains.

At CES the company demonstrated what it called Rovi, a mobile robotic generator unit. (See below) 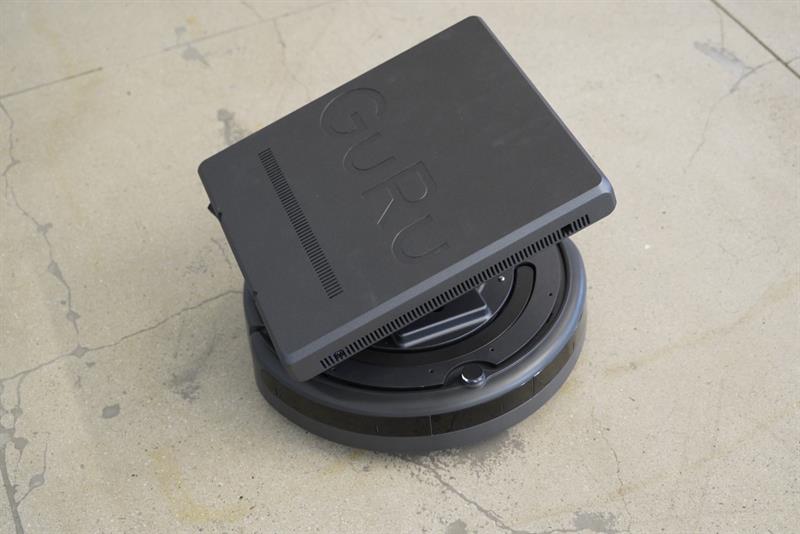 “This robotic device is able to move around in a large space and identify devices that need charging – it’s especially suitable where IoT devices might be deployed and which need to be kept charged.”

According to Bohn, the companies wireless power devices, whether generating or recovering power, are scalable.

“IoT sensors don’t need as much power, for example, so could be supported by our Rovi device. If you’re looking to power multiple devices across a large area, then we can place a larger generator unit in a ceiling, for example.

“The system is basically a radar - it has all the necessary components to be one. The resolution is a lot higher, however, and we are able to pinpoint with great accuracy where things actually are.

“As a result we don’t need to flood a room, or location, with energy. We’ve created a feedback link that enables the generator unit, via software, to know where the various recovery units, which will have been incorporated into various devices, are and whether they are sufficiently charged,” Bohn explains.

“In turn the recovery unit will know what is around it and where energy is coming from. When a device makes an active request for power it will be sent it.”

Wireless charging will benefit both the accelerating digitalisation of industry, along with the roll out of the Internet of Things, according to Bohn.

“When combined with the roll-out of 5G networks, wireless power will have far-reaching benefits for engineers and product managers who are looking to develop IoT products-for both businesses and consumers.

“This technology could mean that IoT devices could receive an almost constant wire-free recharge and with power available over the air, batteries sizes can shrink or even be eliminated entirely. As a consequence you could see smaller sensors and significantly cut battery waste,” Bohn suggests.

As a consequence of smaller sensors it will be possible to develop more streamlined IoT products, allowing the development of devices with more complex and varied functionalities.

Smaller batteries could also mean devices can be both lighter and have room for other components and capabilities. As Bohn points out, “most of the volume and weight of any device comes from its battery.”

One area of particular interest in the technology is from the medical sector, according to Bohn, who suggests that it could provide not only much greater efficiencies but significant costs savings.

“Medical staff will be able to improve poor battery management avoiding the logistics associated with ensuring that medical equipment is properly charged; wireless charging can be done in a clean way, with no need for cables, which means that devices can be sealed making it easier to clean and disinfect equipment.

“It will also be possible to make equipment more mobile so that it can be moved with the patient without worrying about charging it. As a consequence it will be possible to streamline workflows within the medical space and make diagnostic equipment portable.”

It all sounds too good to be true and as with all technology there is a significant drawback with the technology in that it isn’t that efficient.

While it’s significantly better than many other devices, delivering upwards of 50 per cent of the power it sends to the devices receiving it, that still means a lot of power is being wasted.

“With this type of technology, energy loss is a problem,” Bohn concedes but makes the point that sending power from point A to B is relatively efficient.

“We are not losing so much that it is prohibitive. One thing all energy systems have is some form of energy efficiency loss, nothing is 100 per cent efficient.

“For the applications we are targeting, whether IoT sensors or charging consumer devices, the amount of power involved is miniscule – so even the loss of 50 per cent of the power sent is relatively insignificant.”

Despite that, at a time when more consumers are looking for ways to reduce their energy consumption, this could prove a problem but, as the technology becomes more efficient at powering devices, the adoption of wireless power could become an everyday occurrence – much mike logging on to your local Wi-Fi.