When it comes to charging consumer electronics devices, everyone agrees wires are inconvenient. We examine the options for a wire-free world...

The induction charging technology is based on Michael Faraday’s discovery that moving a permanent magnet in and out of a wire loop induced a voltage. Qi uses a copper wire loop induction coil which carries a charging current at a high frequency. Ferrite is used to limit the magnetic field around the copper wire to improve conduction. Matching a receiver in a device to the induction coil (transmitter) instigates charging.

Qi is a low power charging technology which transfers low-frequency (100kHz to 205kHz) over short distances. Last year, NuCurrent introduced what it claimed is the first Qi-qualified 15W wireless charger that increases the charging distance to 12mm.

The development extends the range of the transmitter so that precision placement is not as critical as in conventional designs which require 3mm to 5mm separation between the transmitting and receiving coils. It also means that, instead of having to carve a trough into pieces of furniture to integrate the chargers, under-table chargers or through surface chargers can now be deployed in furniture and automotive design. 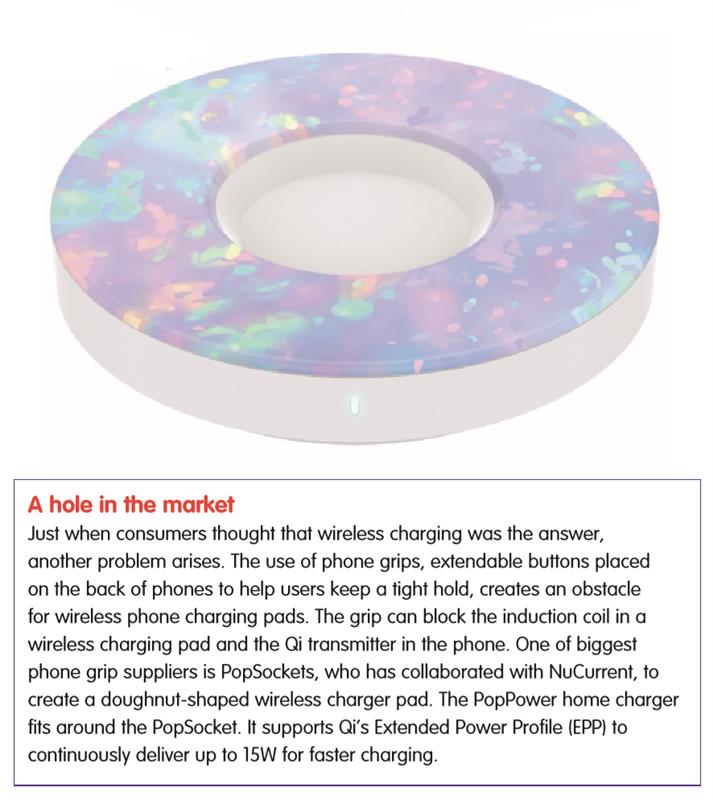 The MP-A17 is a Qi Extended-Z Tabletop Charger design that “dramatically advances the [Qi] standard,” said Jacob Babcock, NuCurrent CEO. It has been approved by the WPC and will become part of the Qi specification version 1.2.4.

The company has also produced a development kit for manufacturers developing cordless appliances and transmitters as part of the WPC’s emerging standard for wireless power in the kitchen.

The NuVerse Cordless Kitchen development kit can also be used for products that comply with the Medium Power Qi standard. This was introduced in 2019, delivering 30W to 65W and expected to reach 200W for electric bicycles, drones and portable power tools. The kit features development boards and a NearField Communication (NFC) - based software stack, which establishes communication between the worktop (transmitter) and appliance (receiver) to initiate the transfer of power and to communicate and manage the status of the appliance. There is also a user-customisable Application Programming Interface (API) and development services to help kitchen appliance manufacturers incorporate wireless power into product designs.

As well as creating a smart, wireless kitchen, wireless charging can also make a statement on a desk or table.

Dutch company, ZENS revels in the technology to the extent that it has produced a charging mat that puts it on display. The Liberty 16 is available with a tempered glass surface which displays the 16 overlapping charging coils in the pad. The multiple coils maximise the active charging area and provide more freedom in placing the device than conventional designs. It can charge two devices placed on the pad at the same time and a 2.4A USB port allows for an additional device to be charged.

There is also a version with a textile cover and aluminium Apple Watch USB stick is available for use with the Liberty or with a powerbank or laptop.

“For now, this is the first 16 coils wireless charger worldwide, which is already a huge step forward, but a lot is possible, so who knows what the future may bring,” commented Lieke Neijens, Marketing and sales support, at ZENS.

The alternative to Qi has been resonant technology, promoted by the AirFuel Alliance, which is focusing on magnetic resonance and RF wireless power technologies.

Maria Singer, marketing and sales manager at PowerCast explained: “Qi is great for higher power devices because you can transfer more power between the two coils than you would with an RF solution. The downside is that you have to be within a few millimetres for that charging to take place”.

PowerCast specialises in RF-based, long distance wireless charging technologies to power or charge devices at distances of up to 80 feet (approximately 24.3m).

“It works by creating an RF fi eld using a PowerCast transmitter and then with our receiver chips and an antenna, you can grab the RF back out of the air and convert it into DC power. And that DC [power] is used to charge batteries,” she continued.

Although longer distances are possible, RF is a lower power charge than Qi, and the company and were used to wirelessly recharge industrial and automation sensors and more recently IoT sensors.

“As more consumer devices are coming to market that are low power, like headphones, smart watches, RF has been gaining in the home setting,” Singer told New Electronics.

An example of this is the wireless charging grips for the Nintendo Joy-Con controllers, which were introduced at CES 2020 earlier this month. The controllers snap into the plastics grips into which are embedded PowerCast’s Powerharvester receiver and a battery. The receiver sends a charge over the air to the embedded battery which charges the Joy-Con controller. They automatically charge when they are within metres of Powercast’s PowerSpot RF wireless power transmitter. Bluetooth Low Energy monitors consumption to request power from the transmitter when the batteries are low.

Below: The Nintendo Joy-Con controller grips automatically charge when they are within meters of the PowerSpot RF wireless power transmitter. 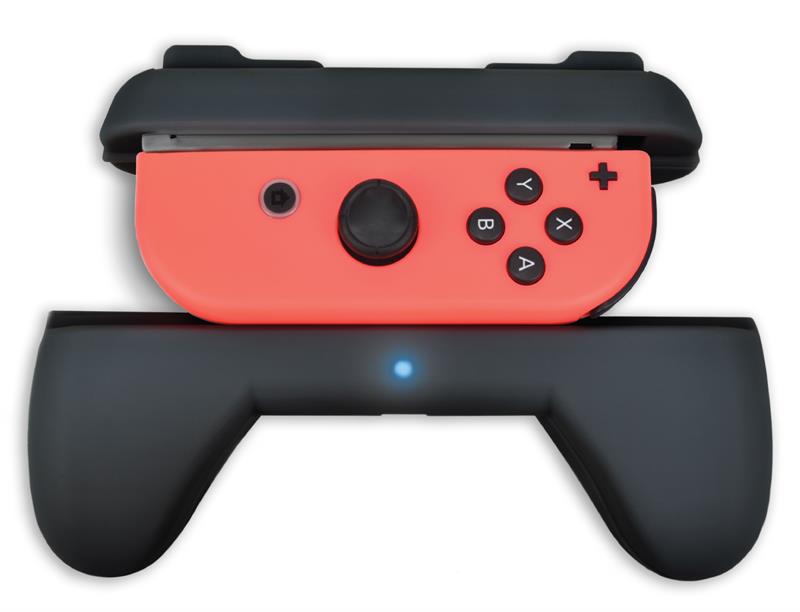 The company’s chips operate with an antenna which can be in different form factors, depending on the application. Users are not restricted to using a PowerSpot transmitter, explained Singer, although it is recommended for dedicated RF applications, it ensures there will be a power source to recharge a device. Where there is ‘expected RF’, i.e. a retail environment with an RFID infrastructure, or ambient RF, i.e. in offices and homes Wi-Fi or Bluetooth traffic, the RF sources may not be relied upon to recharge devices using RF energy, Singer advised.

“Our transmitters operate at 915MHz, which is the same as the US RFID systems,” Singer said. “We don’t have a transmitter yet available in Europe but, on the receiver side, we offer development tools and a lot of our customers are able to use our receiver chips in Europe… We typically partner with companies who have existing products that we can make wirelessly chargeable all over the world,” said Singer.