The hype around autonomous driving of a few years ago has given way to a growing realisation that when it comes to rolling out self-driving vehicles, it's going to be a lot more complex and challenging than many previously thought.

We’re yet to see significant numbers of these vehicles on our roads and while the promises associated with the driverless revolution, whether making driving safer or delivering more environmentally friendly forms of transportation still ring true, it seems that engineers are beginning to realise that it will be a lot harder to deliver.

Stan Boland, CEO and co-founder of Five, has been leading the development of the company’s self-driving systems since it was set up in 2015. Five has developed a cloud-based development and assurance platform which aims to help OEMs and other industry partners to accelerate the roll-out of autonomous systems.

Back in 2019 Five led the UK government-backed Streetwise project to better understand the issues around the deployment of autonomous vehicles on UK roads. The company was heavily involved in the development of the complex software that was used to process the outputs from the cameras and on-board sensors that provided the data needed to predict and control the decisions made by the AVs. ”The development of Automated Driving Systems (ADS) is possibly the greatest technological challenge of our time. The complexity is astonishing,” admitted Boland, “and it’s certainly more complex and challenging than many of us thought, especially when you are looking at operating an AV in an urban environment.

“When we set up Five our aim had been to build an autonomous driving system along the lines of Waymo, Uber ATG and Cruise. However, we soon realised that bringing this technology to market was going to be challenging and would require very deep pockets. As these systems have started to move from the proof of concept stage to operating in a functioning real-world environment it became obvious to us that there was still a long way to go before the technology would be widely deployed.”

As a consequence, Five decided to ‘pivot’ from developing its own AVs to developing and focusing on the test and verification systems necessary to support their safe development.

“We realised from developing our own AV that how you went about demonstrating the safety of the system – which is by its very nature very complex – means you have to deal with thousands of potential interactions, each one of which can lead to serious error propagation. The urban environment in which we expect these vehicles to operate is extremely complex and there are no specifications telling you what to build, essentially you have to discover it for yourself and that requires an enormous amount of work.”

It’s the size, difficulty and expense of this challenge that is seen as a major factor in the hype around self-driving vehicles ‘fizzling out’ and it wont be until they’ve been effectively tackled that the widespread commercialisation of ADS technology will become a reality.

At the heart of any autonomous system is the concept of ‘Sense, Plan and Act’ which defines the development of the autonomous vehicle. ‘Sense’ is about developing an internal model of the outside world, including the location of the ADS in that world; the ‘Plan’ is about developing a high level trajectory plan for the ADS based on goals, an interpretation of that model in the world and rules, and ‘Act’ translates that plan into acceptable forms of, for example, autonomous steering, acceleration, braking and signalling.

Sense is the component where ‘AI’ generally lives, often in the form of deep Convolutional Neural Networks (CNNs) interpreting LiDAR, radar and camera-based sensor outputs, while the Plan component lies within the traditional domain of robotics, although it is also required to plan under uncertainty, since the Sense component will never interpret the world completely accurately.

“The Streetwise project trialled one of our vehicles over mixed-use public roads in South London. The route complexity was high and our software had to interact with a variety of real-world scenarios. The project offered a clear insight into technology readiness and passengers’ reaction to it,” explained Boland. “But it also highlighted the chasm that existed between a prototype project and a system that is able to detect, understand, predict and plan at all times reliably in a complex real world situation.”

While Five demonstrated that its reference ADS could operate at high safety even on public roads, making over 100 public test drives in a single month across a complex 21km route in South London, it learned a great deal about the types of errors that could arise and impact the decision-making of the system.

“When it comes to perception errors they are critical and will have a profound impact in planning errors. When entering a roundabout if the system isn’t seeing the road or orientation of vehicles correctly – it could be off by a matter of a few degrees or centimetres – then the ride will not be smooth or safe.”

According to Boland too much testing and verification is done in isolation and what was needed was an end-to-end solution that brought perception and planning together. 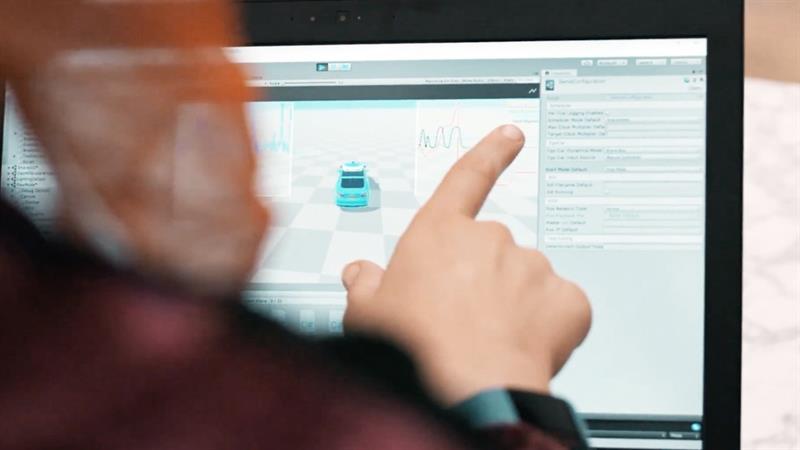 “To improve accuracy and reliability of perception it is necessary to fuse information from multiple sensors and detectors using an understanding of how likely to be correct the information will be. Also, we believe it is impossible to label sufficient data to solve or verify or validate these real world problems, so it is also essential to find techniques able to make use of unlabelled data

“You can’t test these vehicles for every conceivable scenario. That would require you driving a test vehicle upwards of 8.8bn miles, so you have to turn to the virtual world,” added Boland.

“When we started building a completely new self-driving system it required Five to create a cloud-based platform to help develop and test the technology and we came to realise that platforms like this would be essential to unlocking the full potential of self-driving systems.

“We’re now rolling out our platform to industry partners to help them build better self-driving systems, shortening their time to market, and enabling the delivery of evidence-based safety arguments.”

Five’s platform is highly sophisticated and provides specific development tools that are able to measure and deliver safety assurance for the whole autonomous system.

“You’re able to choose or create your own scenario, run varied simulations, then evaluate them and based on that refine your stack. A cloud based system makes it possible to explore different scenarios more quickly and to identify faults by exploring the most relevant scenarios.”

Boland said that too many of the existing measures for safety performance were too simplistic and inefficient and actually hid many of the system’s failures, which in turn slowed down the development process.

“As a result there was a need for a more efficient and powerful form of simulation, capable of creating more experiences for the system than taking a vehicle for an actual ride.”

Collaborative efforts such as StreetWise showed that bringing self-driving to fruition will be a team effort with partners working together to solve complex multi-disciplinary issues and while Five’s development of its platform has gathered pace - it’s now being used in other projects to speed up developments and improve safety assurance - the successful roll-out of autonomous vehicles will require companies to work differently and to collaborate more.

“We are seeing the development of a whole new AV ecosystem in what is a very broad field – from software to sensors and the application of neural networks. To be successful the big players in this space will need to successfully orchestrate a complex network of suppliers. It’s coming together but the challenges around AVs remain significant.”

One step at a time

One step closer to quantum computing