There is, of course, turbulence along the way, including more rigorous attention to safety by regulators and the ability of lawmakers across the world to keep ahead of – maybe even keep pace with – innovations in the sector. Also crucial will be the pace at which completely reliable obstacle avoidance systems can be developed and deployed.

Semiconductor manufacturers are already having a major impact, both as suppliers to and significant investors in established players and start-ups. While the sector’s increasing commoditisation – on the back of cost effective sensors and chipsets developed for smartphones and digital cameras – is welcomed, developers argue that potential users – notably in the fast growing commercial sector – are looking for targeted solutions, rather than complex drone technology.

The biggest player in the consumer sector is Chinese group DJI, which last year had sales of $1billion and about 70% of the global market. French company Parrot – the first to launch a working mini-drone in 2010 – has shipped 1.5million units, while 3D Robotics is the largest US supplier.

A third category that is growing in importance is the ‘prosumer’ market, targeting professional photographers, film studios and utility companies. While these offer the best machine vision, image processing, range sensors and autonomous control, there is a degree of blurring between the prosumer and commercial categories.

No wonder chip groups want part of the action: Qualcomm, Nvidia and Ambarella are supplying companies directly, while Intel is a major investor in drone makers. 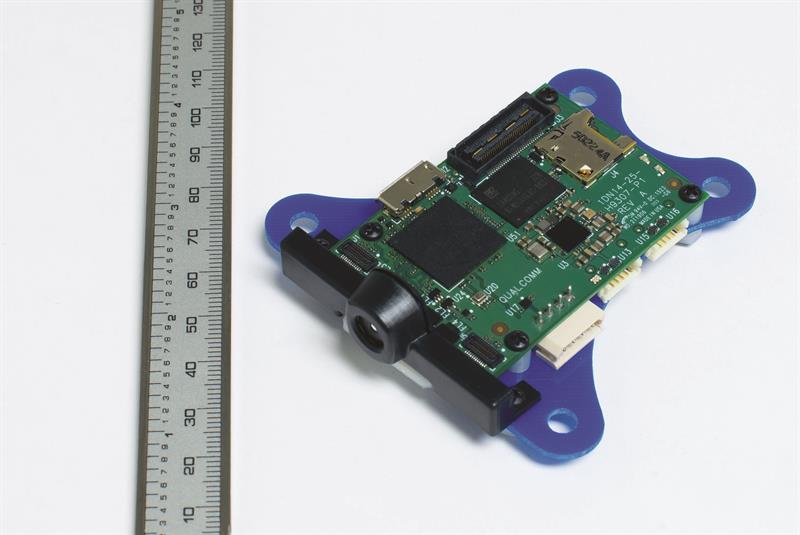 “The key to our approach is platform integration, allowing designs that are smaller, more reliable, safer, more adaptable and more power efficient,” Anthony Murray, general manager and senior vp of Qualcomm’s IoT business segment told New Electronics. “Our Snapdragon Flight platformwill also improve time to market for OEMs. Today, most drones feature up to six boards, but Snapdragon Flight comprises almost all the functionality necessary on one board, optimised to work together.”

Snapdragon Flight is powered by an 801 processor, already used in many smartphones, with dual image processors supporting up to 21Mpixel for 4K photography. Real time autonomous flight control is handled by the Qualcomm Hexagon DSP, while other features include dual band 2x2 Wi-Fi, Bluetooth 4.0 and GNSS for accurate location. It also features the company’s Quick Charge technology for fast battery refresh.

Murray said the company is planning to offer a range of software modules for flight and gimbal control, optical flow detection and visual inertial odometry. The company will support the PX4 open source flight control system (see box), as well as others, including its own software platform.

“Right now, this market is relatively small, perhaps 4 to 5m units excluding the sub $100 hobby segment. But it is expected to grow very quickly.”

The chip group partnered with Chinese drone vendor ZeroTech and internet provider Tencent at CES to demonstrate YING, a small drone said to be the first based on Snapdragon Flight. While the board is scheduled to be available in commercial drones shortly, there were few details about YING’s availability. Murray said Qualcomm has other design wins for the platform, but would not elaborate.

Another big Chinese player, Yuneec, has suggested it would use the Snapdragon platform in future drones.

Late last year, Nvidia launched its own drones platform. Jetson TX1, said to be more powerful than Snapdragon Flight, uses the TegraK1 embedded processor, with an ARM Cortex A-57 running at 2GHz.

Also joining the dogfight is drone giant DJI, which is making available to OEMs the Manifold hardware developer board, featuring the Tegra K1 quad core ARM processor and Ubuntu 14.04. The board lets developers connect to numerous third party sensors.

These efforts will face tough competition from Ambarella, which has a first mover’s advantage in the drones chip market. It focuses on video and image application processors and its devices are used by DJI and GoPro, an early leader in drone cameras. GoPro is said to be set to enter the drone market with a model dubbed Karma and there is speculation whether it will use Ambarella’s chip or Snapdragon Flight.

Intel has been making the news with bravado keynotes and spectacular flying demonstrations at big events such as CES and Mobile World Congress, and a host of significant investments.

A flock of drones at CES 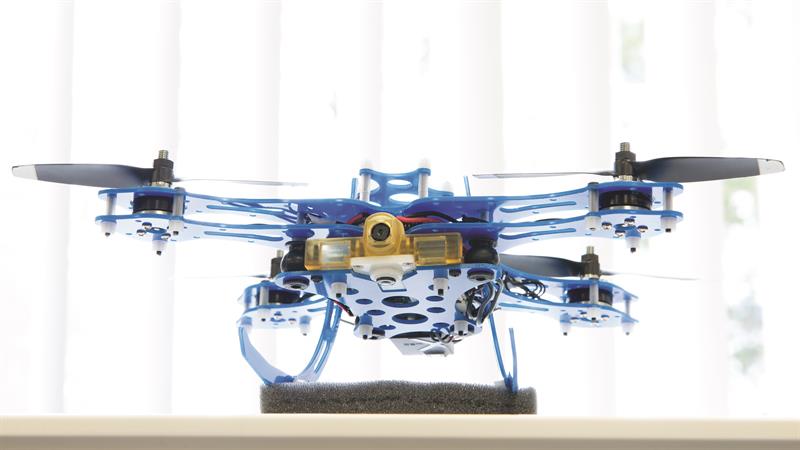 Qualcomm showed its Flight platform at CES in January 2016

At CES, Intel demonstrated a flock of Ascending Astec Firefly drones – featuring its RealSense cameras and a Core i7 processor – manoeuvring autonomously and avoiding obstacles.

Last month at MWC, while focusing on its Drone Zone, the company surprised many by revealing it is working with AT&T to test how drones would operate on an LTE cellular network at higher altitudes and in situations that are beyond line of sight. The companies stress connecting drones over such a network will address such long term challenges as safety, security and real time communications.

Spectrum availability could become a major and contentious issue in the longer term but, for now, all four companies contacted for this article suggest the unlicensed 2.4 and 5GHz bands are more than adequate for drone communications. Nevertheless, at last year’s WRC, a dedicated frequency around 5GHz was allocated for drone use.

“We like to use Wi-Fi,” Yannick Levy, VP of corporate business development at Parrot, told New Electronics. “You can do so much with that link, even bring amazing quality video to your smartphone. Of course, as an industry, we need to look at alternatives for the future, but surely they will add to costs as we may no longer have access to a commoditised 802.11 chip.”

Levy said Parrot manages to maintain its lead in consumer drones because of its sensor expertise – it makes its own MEMS modules so it can focus on stabilisation – as well as its knowledge of embedded software and adherence to open systems. “These will be important factors as we seek to participate in the commercial drones segment, notably agricultural applications.”

Late last year, Parrot launched BePop 2, a lightweight drone offering 25mins of flight time (almost double the earlier version), ultrasound and pressure sensors and a 2km range. A useful feature is an emergency cut-off that shuts off the quadrotor motors instantly should a blade hit an obstacle. The drone uses an ARM Cortex-A9 processor and a 14Mpixel fisheye lens.

And the company has a next generation product on the horizon – the Parrot Disco. “It’s basically a fixed wing aircraft powered by a single rotor in the rear,” said Levy, “and using many of the technical features that we gained through our acquisition of senseFly.”

Parrot’s major competitor, especially in the US, is 3D Robotics, whose hugely successful Solo models are targeted at consumer and professional aerial photography.

Co-founded by Chris Anderson -- the former editor in chief of Wired magazine who also started DIYdrones.com, the biggest online community for developers and users of consumer drones – the company claims it shifted 100,000 units last year and raised series C funding of $50m, the lead investor being Qualcomm Ventures.

“I believe this industry must, and will, follow the silicon integration model – smaller, lighter, smarter, cheaper,” Anderson told New Electronics. Its Solo range is based on ARM processors, the PixHawk open autopilot platform (see box) and the GoPro camera, but Anderson said future models are likely to feature Snapdragon Flight boards.

He added the company is moving quickly into the enterprise end of the market, where margins are significantly better.

Anderson envisions 3DR becoming an ‘enterprise software company’ and most of its investment is targeting the development of enterprise solutions that will use its drone related technologies, such as aerial data collection. This data would then be uploaded to the company’s cloud network, analysed and processed and forwarded to the customer.

It’s a vision, but will it fly?

Is cable 'just cable', or is there more to linking systems than meets the eye?

Raspberry Pi is becoming more than a niche educational computer

A shift in the distribution sector

Atmel SAM4 mcu family: it's about more than just the core