As hobbyist and commercial drones become ever cheaper and more ubiquitous, security and government officials around the world are stepping up efforts to detect the presence of drones or unmanned aerial vehicles (UAVs) in places where they don’t belong.

Tektronix USB-based real-time spectrum analyzers, such as the RSA306B or RSA500 series, can be used to quickly and accurately detect the presence of single or multiple drones by monitoring the unlicensed RF spectrum operators use to control drones. Utilising spectrum analysers and advanced analysis software, it’s possible to identify the type and manufacturer of a particular drone by its unique waveform signature to take the appropriate countermeasures.

As shown below, even in the congested 2.4 and 5.8 GHz bands, drone control signals can be readily identified using real-time I/Q captured data from a Tektronix real-time spectrum analyzer while ignoring Wi-Fi and Bluetooth communications in the same spectrum. 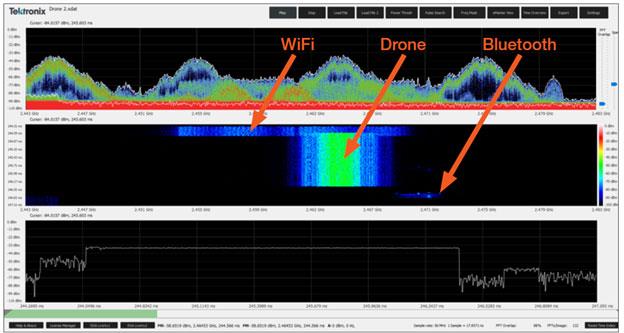 For smaller operations, such as ensuring an individual’s privacy at an outdoor social gathering, a single operator equipped with a spectrum analyser may be sufficient. But for locations such as airports or event venues with a large perimeter that needs to be monitored, an automated drone detection system offers more permanent protection.

Creating a system for a large area can be accomplished easily by networking multiple RSA306B or RSA500 Series Spectrum Analyzers around a perimeter to constantly monitor for the presence of drones.

Tektronix has partnered with Erisys RF Solutions to release an automated drone detection solution based on Tektronix’ real-time spectrum analysers and Erisys’ SpectrumVu software. SpectrumVu is an advanced software package that provides fully autonomous monitoring of the RF spectrum, can record unknown spectral events and generate alerts upon the discovery of unknown signals.

To set up an automated drone detection system, nodes are set up around the outside perimeter as illustrated for La Guardia Airport in the diagram below. Each node includes a spectrum analyser, an antenna and an Intel NUC, an inexpensive and powerful 4x4-inch mini PC.

Once the nodes are networked to a central operations center, they provide comprehensive coverage of the perimeter and flight paths. Using multiple nodes, it’s possible to identify a drone’s location on the x-y-z axis.

With this system, the RF spectrum is autonomously monitored 24/7. Triggers can also be set on unknown signals or on signals with power above user-defined thresholds to create alerts. Known, unknown, and event signals can be captured by the real-time spectrum analyser and displayed on the SpectrumVu dashboard as shown below. 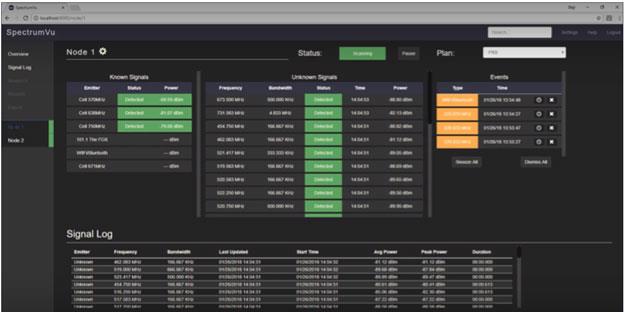 SpectrumVu takes advantage of recent innovations in neural network technology to automatically identify likely drone signals. The software can also step or tune to a 40 MHz chunk of the RF spectrum, record the I/Q data, and then step to a different 40 MHz band. This process repeats across the unlicensed drone spectrum, monitoring the entire spectrum by processing small I/Q files continuously.

Through the use of machine learning, the software is able to automatically identify the unique RF characteristics of both the drone control signals and the drone first person video (FPV) video downlinks. The processing pipeline for end-to-end learning from spectrum data is shown below. When the waveform properties match the neural network stored signal properties, SpectrumVu issues an alert to indicate the likely presence of a drone. For additional analysis, unknown signals can be stored in an SQL database to accelerate drone identification and support additional analysis of the RF spectrum environment.

With the growth of hobbyist and commercial drones, a stand-alone or network of real-time spectrum analyzers provides a valuable tool for monitoring RF environments and detecting drones. For organizations concerned with drones operating where they shouldn’t, it is important to invest in solutions that provide real-time awareness, 24/7 monitoring and automated alert capabilities.