At the heart of Industry 4.0 is a reliable communications infrastructure that enables data to be extracted from machines, field devices, and factories and delivers trusted and precise operation.

With the need for smarter systems, more data, and higher fidelity, bandwidth requirements are increasing but faster communication interfaces need to be both reliable and safe against environmental hazards and electromagnetic compatibility (EMC).

Vision guided robots offer increased flexibility and intelligent operation but in a hazardous EMC environment, such as a factory, their reliability is dependent on the chosen wired link technology i.e. USB 2.0, USB 3.0, Camera Link, or gigabit Ethernet.

Industrial Ethernet offers many advantages, with the longest cable reaching up to 100m for 2-pair 100BASE-TX and 4-pair 1000BASE-T1, and up to 1km with the new 10BASE-T1L standard on a single twisted pair cable with high EMC performance. Cable reach using USB 2.0 or USB 3.0 is limited to 5m, unless specialised active USB cables are used, while EMC performance needs to be boosted using protection diodes and filtering. However, USB port ubiquity on industrial controllers and bandwidth up to 5 Gbps provide the designer with some advantages.

Camera Link needs dedicated frame grabber hardware on the industrial controller, while USB or Ethernet do not. Camera Link was introduced in late 2000 but today USB- and Ethernet-based machine vision cameras are more widely used, however it is still used for applications that require pre-processing for multiple cameras to reduce the main CPU load. 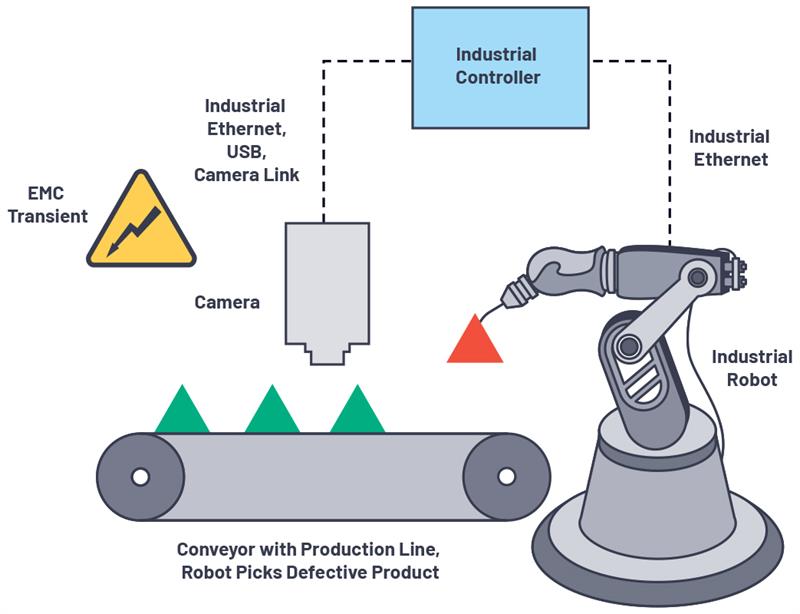 Compared to gigabit Ethernet, even at base speed, the Camera Link standard pushes twice as much data out, albeit over a shorter distance. The Camera Link physical layer is low voltage differential signalling (LVDS) based, with inherent EMC robustness due to common-mode noise coupling to each wire effectively cancelled out at the receiver. EMC robustness can be boosted using magnetic isolation.

When it comes to time synchronisation between the industrial camera and the robot action it is best to use Ethernet on both camera and robot links, and an industrial controller that uses an IEEE 802.1 time sensitive network (TSN) switch. TSN defines the first IEEE standard for time-controlled data routing in switched Ethernet networks.

A human machine interface (HMI) is commonly used to display data from a programmable logic controller (PLC) and can be used to track production time, while monitoring key performance indicators (KPI) and machine output. It can be used for a variety of tasks, including increasing or reducing the pressure or speed of a process. HMIs with integrated display screens are common, however, HMIs with external display options offer some advantages. Those with High-Definition Multimedia Interface (HDMI) ports are smaller and can be easily placed on control racks using standard DIN rails.

Cable lengths of up to 15m are possible with HDMI, allowing easier routing to touchscreen monitors and control rooms. Extending HDMI over longer cable lengths can be challenging, with EMC hazards affecting cabling. With motors and pumps connected to the DIN rail-mounted PLC, there is also a possibility of indirect transient over-voltages on the HMI – so careful selection of interface technologies is critical. Field bus technologies, such as CAN or RS-485, are common, with Industrial Ethernet growing rapidly.

High EMC performance can be achieved with Ethernet-based technologies as magnetics are written into the IEEE 802.3 Ethernet standard, and must be used at every node. RS-485 devices can include magnetic isolation to increase noise immunity, and protection diodes can be integrated on-chip, or placed on the communication PCB to increase robustness.

Analog Device’s ADN4654 family of LVDS digital isolators is a new option for system designers combining high bandwidth with trusted safety. It features two channels of isolation with a data rate of up to 1.1 Gbps per channel, representing a significant leap in the speed capability of digital isolation. With a total throughput of 2.2 Gbps in a 20-lead SSOP package, it is able to achieve significant area savings.

While typical optical fibre solutions require the translation from copper medium to fibre optic to be supported by a serializer, a deserializer, and electrical-to-optical converters that presents overhead to the system designer when adding isolation to a simple high bandwidth interface.

By leveraging the gigabit data rate of the ADN4654, the complexity of the system can be reduced, and a 4.4 Gbps bandwidth can be achieved by using just two devices.

Each device has two channels, totalling four channels that operate at 1.1 Gbps on each channel. The high channel bandwidth can eliminate the need for any SERDES block in the signal chain.

Physical layer interfaces that operate above 1 Gbps have strict peak jitter and skew requirements to ensure reliable communication, so any component added into the signal chain must contribute minimal jitter and skew to avoid impacting system performance, as both can affect the sampling margin at the receiver and increase the overall bit error ratio. The ADN4654 features skew performance of the 100 ps max on a given channel, and 600 ps part to part, which makes it suitable for isolating these high bandwidth interfaces. It also adds minimal jitter, with a max random jitter performance of 4.8 ps rms and max peak-to-peak deterministic jitter of 116 ps using a PRBS-23 (pseudo random binary sequence) pattern. Pattern run lengths of less than 23 bits are common, and jitter performance is improved beyond these values in protocols with encoding schemes with a lower run length, such as 8B/10B encoding.

Also featured is an internal LDO regulator for flexible power supply configurations. They are available in various channel con- figurations.

When faced with the task of adding safety isolation to a video interface, the complexity of the video protocol is challenging but drop-in reference design solutions can reduce the development time required.

Since its introduction HDMI’s success can be attributed to both its feature set and reliable interoperability.

The EVAL-CN0422-EBZ reference design is available as a drop-in solution for users wishing to add galvanic isolation to existing HDMI 1.3a video ports. iCoupler isolation technology is combined to transfer the necessary power and high speed video and control signals across an insulation barrier.

Video data in the HDMI 1.3a protocol is carried across four TMDS lanes: three data lanes and one clock lane - each must be individually isolated. Traditional digital isolators support neither the high bandwidth nor the differential nature of TMDS, making them unsuitable. While TMDS differs slightly from LVDS, simple passive components can be used to allow compatibility with LVDS- compliant devices. These passive components are used in conjunction with two dual-channel gigabit ADN4654 isolated LVDS transceivers to isolate all four TMDS lanes. A pixel clock frequency of up to 110 MHz is achievable, supporting 720 p resolution at a frame rate of 60 Hz.

The HDMI protocol contains other low speed signals that are used for control purposes: the data display channel (DDC), consumer electronics control (CEC), and hot plug detect (HPD). The DDC is used to allow the source to read display EEID data from EEPROM and exchange relevant formatting information. The CEC signals allow for shared functionality between multiple connected sources and sink devices. HPD is asserted by the sink device when it has detected an attached source, signalling a connected device. 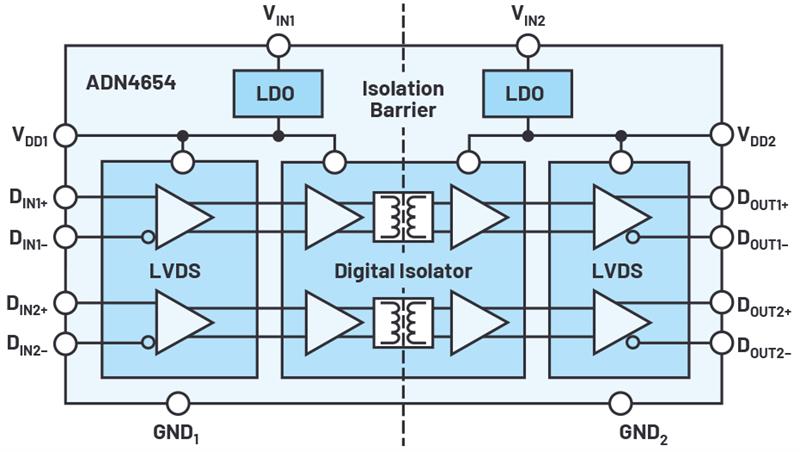 The fido5100/fido5200 REM switch family, for example, includes two, 2-port Industrial Ethernet embedded switches that interface to any processor and they have been designed so developers can choose the type of processor that fits their application and not be forced to use a particular vendor’s protocol stack. REM attaches to the memory bus of a processor and looks like any other peripheral out on that bus. The memory cycle for REM goes down to 32ns (125 Mbps with a 32-bit bus) to support the 12.5 µs cycle time for EtherCAT and the 31.25 μs cycle time for PROFINET IRT. Data is transferred to and from the switches using Priority Channel queues, so real-time data transfers can interrupt non real-time data transfers without any delays. Queues are managed by a switch driver and interface to the protocol stack to achieve the most efficient data transfers possible. 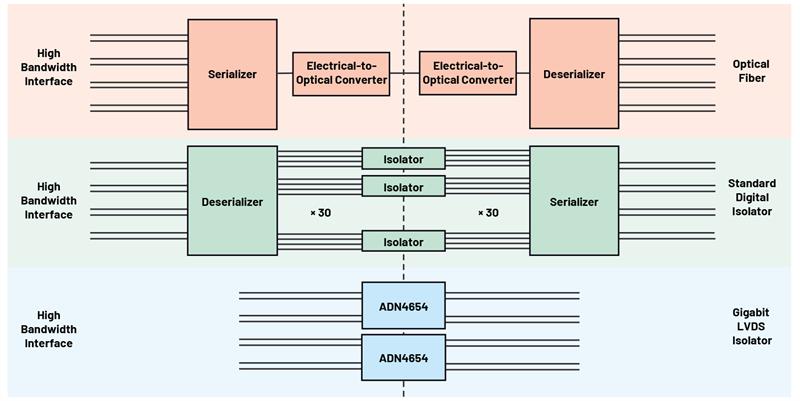 Another performance advantage of Industrial Ethernet embedded switches is that their Priority Channel technology makes them immune to network loading effects ensuring that applications are up and running at all times. The REM switches intelligently filter packets so as to keep unwanted traffic from the processor; manages low priority traffic and guarantees the timely delivery of high priority packets, regardless of overall packet load.

ADI’s ADIN1100, ADIN1200, and ADIN1300 Industrial Ethernet physical layer devices (PHYs) have been designed for harsh industrial environments and can be used in applications demanding predictable and secure communications.

With low latency and low power PHY technology, they can support data rates of 10 Mbps, 100 Mbps, and 1 Gbps and support multiple MAC interfaces while being housed in small packages. They can also operate over extended industrial ambient temperature ranges.