Sports stadiums are fast emerging as one of the most important and useful proving grounds for the latest in advanced wireless technologies.

Perhaps this is not that surprising: when you get many tens of thousands of fans all trying to get cellular and Wi-Fi signals simultaneously to send selfies, support live HD video, upload videos and live stream part of the action, the stress on any mobile network is likely to be at its maximum.

Over the years, despite apparent advances in base-station capabilities and increasingly higher speed and capacity routers, the user experience has often been disappointing, with wireless connectivity falling over more often than not when the venue is at maximum capacity.

Finally, this seems to be changing. Indeed, according to a survey by market research group Ovum for US software and communications services group Amdocs, consumers’ first 5G experience is likely to be at a 2020 sporting event, and the analysts suggested two-thirds of global operators plan to offer augmented reality (AR) and virtual reality (VR) services soon after that date at 5G-enabled event venues.
Ovum also found that 82% of operators are planning to offer IoT related technology and services to stadiums and tournament organisers, so as to create significant efficiencies in stadium management.

And while it was difficult to get realistic financial estimates as to what this could be worth to suppliers of wireless, audio-visual and services gear and software, “we see it as a huge opportunity, and at times a challenging one in terms of design and implementation, including as it does numerous elements from increasing security to alerting customers via mobile apps to which toilets and bars may be the most appropriate for them at certain times”, Marc Waters, MD in UK and Ireland for HPE (Hewlett Packard Enterprise) told New Electronics.
HPE is arguably the corporation that has to date had more experience than any other in terms of kitting out some of the largest and most complex stadium upgrades and new builds.

Not surprisingly, it has been the vast venues in California built for American football that were first to set the trend. For instance, the Levi Stadium, home to the San Francisco 49-ers in the US NFL, started a major upgrade about 18 months ago, and now boasts 1300 Wi-Fi Access Ports (from HPE), 2000 IPTV-connected screens, and a 40Gbit/s communications network linking 12,000 Ethernet ports, as well as 1700 Bluetooth based beacons that can recognise the location of every fan.

Meanwhile, at this year’s Super Bowl, Atlanta’s Mercedes-Benz stadium re-wrote the record books as regards Wi-Fi usage in a confined space, with a reported 24.06Tbytes of data traffic across the stadium’s network, a take-up of 69% of the 70,000 capacity crowd. The 1800 HPE Aruba APs – installed under the seats – saw a peak throughput of 13.06 Gbit/s at half-time.

Such feedback is hugely useful and important when bidding for new contracts, “and many, many new stadiums are consulting us when planning new capabilities”, said Waters.

Forget the heating coils embedded in the seats and the gimmicky magnetic technology that pumps beer directly into the base of the glass in the 65m Goal Line Bar - said to be the longest in the UK - or the fact that you will not be able to use cash anywhere in the stadium. It is the advanced connectivity that fans will find has changed their experience the most, and that capacity has hugely increased to just over 62,000.

Asked what the key parameters for ensuring seamless wireless coverage, Sanjeev Katwa, head of technology at Tottenham Hotspur Football Club, told New Electronics: “It is absolutely vital to have a good technical design to cope with co-channel interference.” And to make a success of such a huge project, “it is vital to ensure that you work with the right partners who understand your vision and what you wish to deliver. Partners who can be flexible in their design and deployment process.” 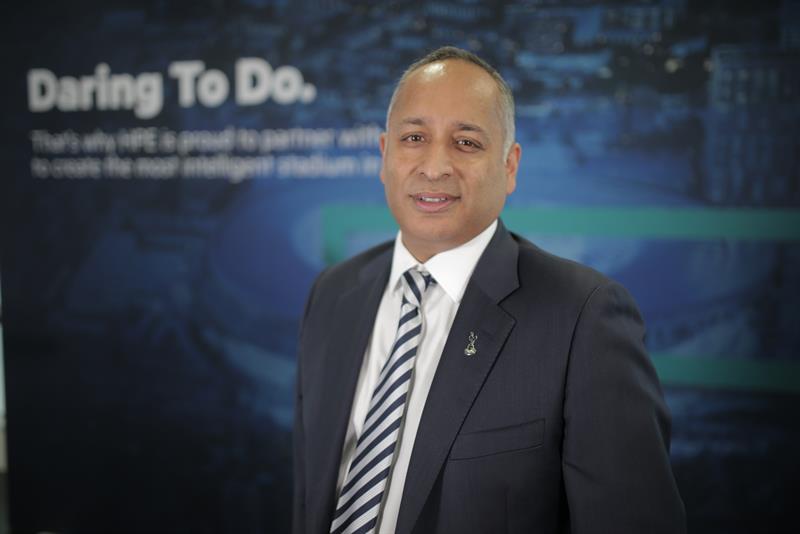 Speaking specifically of the Spurs project, Katwa told New Electronics: “As with all complex technology projects there are always going to be challenges to overcome. For our stadium, one key issue was around installing and deploying the technology into areas which were still under construction. Since opening, we are continuing to enhance and optimise the technology solutions we have installed to ensure the best possible experience for our fans.”

He stresses that because the technology backbone and network infrastructure installed is robust and resilient, it will allow the club to push new developments as soon as they seem necessary and worthwhile. “We will always look at new things. We are not going to stand still. We have some great infrastructure to do fantastic things”, Katwa responded to questions regarding plans to upgrade to Wi-Fi-6 capability and the coming 5G.

This approach is probably a must as the football club’s management are keen to see the new venue as a multi-disciplinary facility. It has already agreed to host several NFL matches each season and will market itself as a venue for concerts.

Of course for NFL matches, the ground will have to transition to that league’s specified artificial surface. For this a very sophisticated engineering system has been devised such that the grass pitch splits into three sections, each weighing some 3000 tonnes. Nearly 70 motors have been installed to power the 168 wheels that carry the sections under the stadium. The club says it takes a little over one hour to convert the pitches. Interestingly, when the football pitch is hidden underground, subterranean LED lights ensure the grass keeps growing – so even here, there is electronic innovation.

For this Spurs fan (the writer has been a card carrying member for some 50 years) Katwa and his designers and suppliers have succeeded. On my first visit, despite the capacity crowd of just over 62,000, I managed to log-on to the really high speed and free Wi-Fi immediately, and on the 4G Vodafone network (the stadium is Joint Operator Specs compliant) I managed a decent 45 Mbit/s, according to a quick speed test.

In part, Katwa suggests, the sophistication and performance targets reached were made easier as the comprehensive, and extensive, hardware could be incorporated into the design of the building from the start. Being part of the fabric of the building rather than an afterthought, almost all systems can be connected intelligently and allows security, electric turnstiles, ticketing to be as quick as possible. Video screens, LED signage, building management and POS systems as well as AV and access control are all connected in a similar way.

Mini-cloud solution
Waters suggests: “Spurs now has a virtual mini-cloud solution that ensures high availability.” And the club is clearly proud of the fact: the enormous data centre sits behind a glass-fronted wall, its servers exposed to supporters in one of the main stands.

HPE installed and maintains just over 1600 of its Aruba Wi-Fi access points, 850 of them under seats, which means there is an AP for every 75 seats and 750 Bluetooth beacons, designed to work with the club’s official app to provide location and other services.

The club has also pushed the boundaries in other areas of technology, notably the ‘feel’ of the stadium as regards the audio and visual experience. Katwa points to the big-screen technology supplied by Daktronics within the stadium seating bowl. This comprises four LED screens inside the ground and two on the south side, each measuring 325 sq. m, and claimed to be the largest in any European stadium. In addition, there are two huge video screens on the outside of the stadium and three tiers of LED ribbon display boards for notices and information, as well as promotion.

On the audio side, there are some 4,500 JBL speakers around the arena from Harman, as well as 135 Dante enabled amplifiers. And the C125 subwoofers strategically located add to a fantastic wall of sound (hopefully often equalled by the sound of cheering fans). All this is said to be down to the fact that the ground now has an IP-enabled network.

The atmosphere will of course be amplified by action from the field of play in response to new technologies already well accepted, such as goal-line technology, and the emergence of Video Assistant Refereeing (VAR) coming to the Premier League next season. And the consensus is that of a future where cameras located throughout the ground will be capturing every moment of the game, all being fed back to a central location.

Looking even further out, AR could completely alter the stadium experience. According to a recent report from the highly-regarded Lausanne, Switzerland based EPFL, technologists working on the development of sporting arenas are already looking at ways in which this, combined with VR, might create user experiences that put spectators in the thick if the action.

But let’s conclude with actual reality, and reflect on Katwa’s perhaps obvious but honest admission that one of the main motivations for not skimping on technology in the estimated £850 million budget for the new stadium was that the club wants fans to arrive earlier and make the most of their day or night out, and, maybe spend that bit extra on the faster available bottoms-up beer and other increasingly costly amenities.

The changing face of customer engagement

The changing face of defence