Lithium-ion batteries are popular because they have a number of important advantages.They’re lighter when compared to other types of rechargeable battery and lithium, being highly reactive, can store a lot of energy in its atomic bonds.

However, these batteries are problematic for some industries in particular for technology and automotive companies, especially the latter which is looking to exploit developments in electric vehicles. For many consumer devices, while they are becoming more efficient, charging is still required every 1-2 days for smartphones and other forms of wearable devices.

Some of the battery technologies that are showing promise include lithium-sulphur batteries, which have a lower environmental impact than lithium and researchers in the US have been able to develop a lithium-sulphur battery that can power a smartphone for up to 5 days, outperforming lithium-ion and which is, in turn, cheaper to manufacture.

IBM Research is claiming to have discovered a new battery chemistry that is free from heavy metals like nickel and cobalt and which, they say, can be charged faster than lithium-ion and is able to pack in both higher power and energy densities.

Wireless inductive charging is another area of interest but being able to capture energy from electromagnetic waves is challenging. A team of researchers have developed a rectenna (radio wave harvesting antenna) that is only several atoms thick and could be incorporated into devices so that AC power can be harvested from Wi-Fi in the air and converted to DC to power a device directly.

These are just a sample of the range and variety of technologies that are under investigation or being developed, but lithium-ion batteries remain everywhere and the number of use cases continues to grow.

All lithium-ion batteries wear down over time and lose capacity, so a lot of the research is focused on their management.

Battery performance degrades due to what is a complex network of subtle chemical processes, each of which do not have much of an effect on a battery’s performance, but collectively can severely shorten its performance and lifespan.

The lifespan of a battery is usually specified in charge cycles, where one cycle is a charge to a specific level and full discharge to termination voltage. For example, if a battery lasts 250 cycles, you can recharge it 250 times before the capacity drops below the end of life level.

How that cycle rating is measured is rarely specified for many devices, but it is possible to use knowledge built up over time about how lithium-ion batteries behave to better manage the cycle life.

It is known, for example, that charging to a specific voltage will affect the battery’s cycle life through surface passivation (SEI) on the carbonaceous anode material, or oxidation of the electrolyte that results in the accumulation of a resistive surface layer on the cathodeactive- material.

Charging at a high speed can also have an influence on battery wear, but research has shown that it is the constant voltage part, in the charging process, that is the most damaging to the battery.

These methods for predicting battery health, however, miss many important features that can indicate the health of a battery.

A lot of research is now focused on tracking the many processes that happen within the battery and for that to happen scientists are using a variety of new techniques to probe batteries in action.

A team of international scientists have been looking at the dynamic process that leads to battery degradation in the electrodes of lithium batteries and are using neutron and X-ray tomography to improve their understanding of the processes that are involved.

The team, based at Helmholtz-Zentrum Berlin and University College London, are using a mathematical method to virtually unwind the electrodes that are wound into the form of a compact cylinder, to observe the processes on the surfaces of the electrodes. Above: 3D image of a battery, virtually cur with a computer programme

According to Alessandro Tengattini, an instrument scientist at NeXT-Grenoble, an imaging station at Institut Laue-Langevin (ILL), “The research is focused on basically two main issues. We want to improve levels of efficiency, so we can develop longer lasting batteries that can survive more recharging cycles, and the other issue that we are looking to address is one of safety. There have been a number of cases where lithium-based batteries have caught fire and exploded or batteries have inflated. Both pose a serious risk.

"We're demanding more power from our electronic devices, so we need to understand the minor fluctuations occurring inside the batteries

throughout their lifetime. For example, in particular areas of the battery you can see much higher rates of depletion and it is possible to observe areas of fracture and damage to the battery, which can have a significant impact on safety.

“While I wouldn’t say that current methods of monitoring batteries aren’t working, they are simply not providing us with enough information.”

To better understand the structure of the battery researchers have been able to look at the electrode surfaces during charging and discharging by using a combination of two complementary tomography methods.

Data is provided by HZB BER II and Institut Laue-Langevin (ILL) which then employs X-ray tomography at the European Synchrotron Radiation Facility (ESRF) in Grenoble. There the data is used to analyse the microstructure of the electrodes and detect any deformations and discontinuities.

"Little research has been done at this structural level, so by using neutron tomography it is now possible to directly observe the migration of lithium ions to determine how the distribution of the electrolyte in the battery cell changes over time,” explained Tengattini.

“This electro-unrolling technique has enabled us to analyse the inside of batteries, while they are in use, to identify minuscule fluctuations to almost the micrometre.”

The instrument at NeXT-Grenoble allows for the simultaneous acquisition of x-ray and neutron tomography, developed in collaboration between the Institut Laue-Langevin and the Université Grenoble-Alpes.

“It's hard to analyse lithium with x-rays because it is a light-weight element, but in combination with the high-flux neutrons provided at the Institut Laue-Langevin (ILL) we have now started to learn more about the electro-chemical and mechanical properties that are at play while these lithium-ion batteries are in use," said Tengattini.

When it comes to the lithium-ion battery its compact design is usually achieved by winding the thin sandwich of battery electrodes into a cylindrical form – that’s because the electrodes need a large surface to facilitate high capacity and rapid charging.

The mathematical method that has been developed enables physicists to virtually unwind the battery electrodes - because the cylindrical windings of the battery are difficult to examine quantitatively.

Only after mathematical analysis and the virtual unwinding can conclusions be drawn about processes at the individual sections of the winding.

The algorithm was originally designed for virtually unrolling papyrus scrolls but can be used to find out exactly what happens in compact densely wound batteries – as a result the characteristic problems associated with wound batteries are now open to investigation.

According to Tengattini, the research has thrown up some interesting findings.

“We found that the inner windings exhibited completely different electrochemical activity than the outer windings. In addition, the upper and lower parts of the battery behaved very differently.

“The neutron data also showed areas where a lack of electrolyte developed, and that can severely limit the functioning of the respective electrode section. It could also be shown that the anode is not equally well loaded and unloaded with lithium everywhere.”

According to Tengattini the research not only showed pockets within the battery where acceleration and depletion occurred much faster but also parts of the battery that were getting completely closed off.

“To date, we’ve only conducted this research on a small number of batteries. While we have observed some patterns more detailed research will likely throw up more reasons for why batteries fail. There are a number of elements that we still need to better understand.

“Despite that this research will help us to develop specific strategies for improving the design of wound batteries.”

Tengattini concluded, "As with all finite resources, we can expect the 'electric revolution' to lead to greater demand from lithium-ion batteries, for less resource. So, in order to meet this, we need to better understand what is happening at the heart of these cells and while the technique we have developed might lead to revisions in terms of how batteries are designed in the future it is too early to say. Despite that it is an important step forward.” 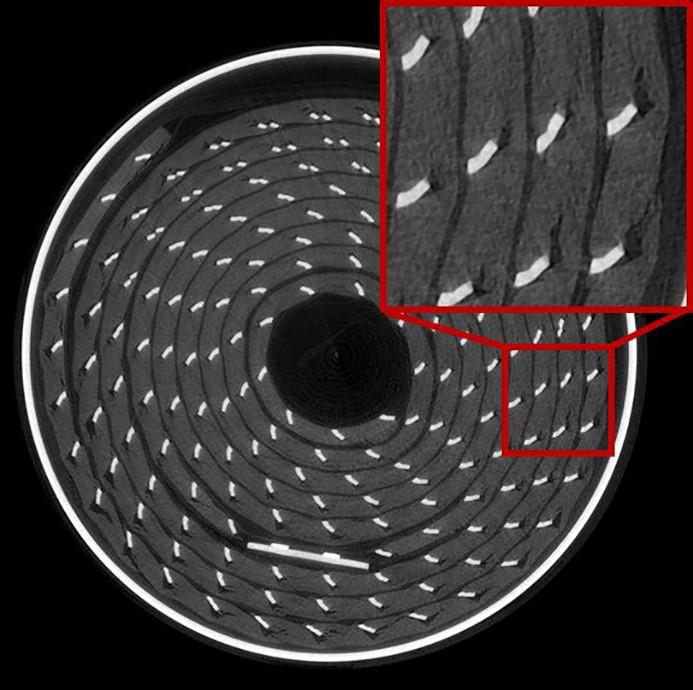 Above: The x-ray tomography shows ruptures in the region of electrical contacts

While that particular team of scientists have been investigating the physical structure of the battery, scientists from Cambridge and Newcastle universities, have designed a machine learning method that they claim is able to predict battery health.

According to the scientists involved the method provides 10x higher accuracy than current industry standards.

The technique works by sending electrical pulses into the battery and measuring the response. They are then measured and processed by a machine learning algorithm to predict the battery's health and lifespan. It’s a non-invasive technique and is a simple add-on to any existing battery system.

"Safety and reliability are the most important design criteria as we develop batteries that can pack a lot of energy in a small space," explained Dr Alpha Lee from Cambridge's Cavendish Laboratory, who co-led the research. "By improving the software that monitors charging and discharging, and using data-driven software to control the charging process, I believe we can power a big improvement in battery performance."

The researchers have performed over 20,000 experimental measurements to train the model, the largest dataset of its kind.

Importantly, the model learns how to distinguish important signals from irrelevant noise.

The researchers have been able to show that the machine learning model can be interpreted to give hints about the physical mechanism of degradation. The model can inform which electrical signals are most

correlated with aging, which in turn allows them to design specific experiments to probe why and how batteries degrade.

Predicting the state of health and the remaining useful lifespan of lithium-ion batteries is critical as new technologies come online and demand better battery technologies.

According to the scientists involved in these various projects this work will help to aid in the development of safer and more reliable batteries for a host of new devices – from electric vehicles to all forms of consumer electronics.