A hearable can be defined as ‘a wireless in-ear computational earpiece’ that is able to fit inside the ear canal and then uses wireless technology to supplement and enhance a listener’s experience.

In the burgeoning audio market, both commercial companies and those specialising in hearing aid technologies are looking to provide users with not only improved and amplified sound quality but then to link them wirelessly with other devices.

Earlier this year, the US company Nuheara unveiled headphones that use AI to calibrate the sound of a personal profile created during the device’s setup and this is just one of a number of applications being developed and it’s the impact of these devices, on people suffering from hearing loss, that could prove life-changing.

“The hearable market is growing rapidly world-wide,” says Maarten Barmentlo, Chief Marketing Officer at WS Audiology. “Airpods are present everywhere and there have been rapid developments over the last few years. Next to them there are a multitude of other smart headphones that offer Bluetooth streaming and can connect to one of the smartphone assistants such as Siri or Google assistant.

Many developers are focused on delivering improved sound quality – in effect filtering out sounds to improve the listening experience – but while sound quality and connectivity are critical, form factor also matters and developers are looking at technology that is unobtrusive.

Companies are also looking to provide augmented hearing technology that can enhance sound, well above normal levels, but can also filter out specific sounds or enhance others.

“A really important change in the future will be that sound design will depart from a hearing loss compensation focus to a hearing and listening quality focus,” suggests Barmentlo.

“In audiology, I think we’ll see two directions emerge. Firstly, people with varying types of hearing loss will benefit significantly from very different sound design approaches. So, fundamentally the future holds a promise for a greater differentiation of sound features that will be more satisfying for consumers and will enhance so-called “first sound acceptance.”

“Secondly, we will also see an evolution of intent driven sound design. Inspired by ‘learning’ applications we can expect to see users personalising their sound in specific situations for greater ease, understanding or sound quality.

“Ultimately, it will be the intent as well as the hearing loss and the environment that will shape hearing aid technology, not unlike the variations of sound processing and codes seen in the audio world, where the setting and circumstance demands different settings of amplifiers and loudspeakers to live up to the expectations of the listener.”

Barmentlo expects automatic noise cancellation will become more common, as well as the development of a transparency mode, “where you will be able to hear the surrounding environment.”

He makes the point that for a truly wearable device, that is one that could be worn all day without being noticed, three key issues will need to be addressed: physical design, sound design and connectivity.

“To become truly wearable devices need to be connected to other devices and the cloud to provide the seamless augmentation of human performance and experience.”

According to Barmentlo, “We are seeing a convergence of technologies and I find the idea of using additional information exciting. We could see motion sensors helping assess whether the user is in motion or not. Other sensors could help understand either the circumstances or the intent better. From which direction is the speech coming? Who is talking in my direction? Together with directional microphones this could make a big difference.

“Another ‘cool’ aspect is speech to text support via phones in noisy environments, almost like augmented subtitling.” The development of innovative form factors that can be worn all day without needing re-charging, will also be critical but here the challenge is how you pack more powerful features into a small form factor and provide sufficient power.

Earlier this year, World Hearing Day, saw the World Health Organisation (WHO) and the European Hearing Instrument Manufacturers Association (EHIMA) campaigning in support of a more active and positive approach to hearing loss. EHIMA represents the six major hearing instrument manufacturers, who between them produce up to 90% of hearing aids made globally.

"Those affected find it increasingly difficult to follow conversations in the family, to understand audio-visual content or to follow meetings. Far too often they then withdraw from their social and professional environment," explains Dr. Stefan Zimmer, Secretary General of EHIMA.

“We need people to better understand the problems associated with hearing loss. Hearing aid technology has been advancing rapidly picking up on sounds, eliminating background noise but it remains a challenge when users are confronted with complicated situations and myriad different sources of sound.”

A lot of hearing technology is relatively old and hearing aid users are looking for technology that suits them, but the reality is that much of the mainstream technology available has been designed for the general population.

“Smartphones and apps are helping to changing that, and are having an impact on hearing loss,” says Dr. Zimmer.

“In the past few years the developer community has looked to stretch the capability of audio and of Bluetooth, which has been used for programming hearing devices, and have done so by delivering proprietary extensions to the technology,“ explains Ken Kolderup, vice president of marketing at Bluetooth SIG. ”Both Apple and Google have introduced extensions to Bluetooth hearing aids, but that has seen only limited availability and there have been issues around interoperability, so it hasn’t been a great situation.” 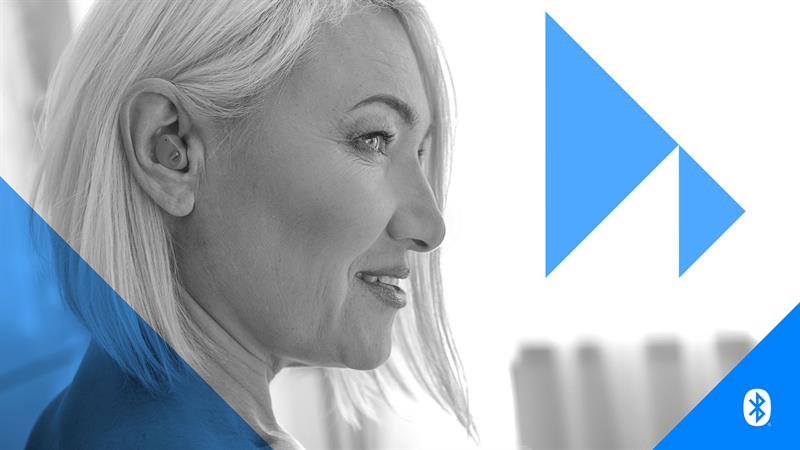 Working with EHIMA since 2013, the Bluetooth SIG has worked to develop a new suite of standards capable of bringing improved features and performance, specifically for hearing aid users.

“Other manufacturers joined the Audio Working Group and that work resulted in a suite of benefits and the launch of LE Audio,” says Kolderup.

"LE Audio will be one of the most significant advancements for hearing aid and hearing implant users. The fields of application range from theatres and concerts to train stations, airports and conferences and so covers all areas of life," Dr. Zimmer adds.

LE Audio will enable Audio Sharing, where a Bluetooth audio transmitter can broadcast audio to an unlimited number of Bluetooth audio receivers and this could form the basis of a next generation of Assistive Listening Systems (ALS), allowing hearing aid users to receive announcements at train stations and the audio track in cinemas, theatres or conferences directly via the hearing aid.

Audio Sharing also allows friends to enjoy music played on a smartphone through their Bluetooth headphones and hearing aids simultaneously.

“Not only will it improve the performance of existing applications using Bluetooth audio, but it introduces a new use case for audio with Audio Sharing. It will completely change the way we experience audio and connect with the world around us,” says Kolderup.

At the heart of LE Audio is a new low-power audio codec - the Low Complexity Communication Codec (LC3). This was developed to provide high quality at low data rates and will allow developers to achieve better design trade-offs between product attributes such as audio quality and power consumption.

Studies into LC3 show that it will provide improvements in audio quality over the SBC codec included with Bluetooth’s Classic Audio, and developers will be able to leverage power savings to create products that can provide longer battery life, or reduce the form factor of devices being able to use much smaller batteries.

According to Kolderup, “The LC3 codec specification is expected to be finalised, adopted and published within the next few months, at which time additional details will be made publicly available.”

When it comes to product development Kolderup says that of “the SIG members that created LE Audio, many are already well underway in the development of, or planning for, products that will include support for LE Audio.”

The introduction of LE Audio is expected to help accelerate market growth with nearly two billion audio and entertainment devices forecasted to be shipped annually by 2024.

The headphone industry has done a lot to help de-stigmatise hearing aids and their use. There's certainly a lot of potential in this space because people with mild or moderate hearing loss don't realise they could benefit from hearing aids.

According to Barmentlo, “Hearables could attract a younger segment and are certainly helping to break down some of the barriers linked to hearing aids. Most people are in their mid-to-late 60’s before they start thinking about hearing aids, but with hearables, first time users will most probably start earlier with “augmented hearing” in an occasional use pattern and this most probably will be the first step towards a ‘career’ in wearing hearing aids.”

There is certainly an argument that we need to reinvent the terminology around hearing loss and that could help to address the issue of stigma. Hearing loss is normal and its part of many people’s lives and it’s not associated with being ‘old’, it affects people of all ages who simply want to be able to hear for longer and better.

While people are reluctant to get started research shows that once people with hearing loss get hearing devices, they often regret not getting them sooner.

Hearing aids have made some incredible progress over the last couple years, with increasingly sophisticated devices being developed. Critically that technology needs to be made available to all consumer electronic devices, so that everybody will have access to it.

According to Barmentlo, there are no real hearable devices as yet.

“I would argue that there are just smart Bluetooth headphones. A hearable, for me would be first of all a wearable, i.e. a device that you wear all day and which you hardly notice you have in your ear.

“Unfortunately, that’s not possible with the devices we have today,” and, while devices are getting smaller, “we are not there yet.”

“Another really important aspect is that the hearing industry is probably the most versed in understanding and dealing with the quality of a person’s voice, and the acoustic effects of putting a device in the ear.

“It is a highly patented area, but also an area that will evolve even further as we get more sensors and tech built into the electronics inside the ear canal.

“In essence, the value of the real estate of the ear has increased tremendously and owning the ear canal and the expertise in building and designing whole solutions for that space has become much more exciting in the last few years.”