The common belief that nothing can be certain, except for death and taxes, can be traced back to the 18th Century. But perhaps the saying needs to be updated for modern times with the addition of age related hearing loss.

According to the NHS website, age is the biggest single cause of hearing loss, or presbycusis. Most people begin to lose a small amount of their hearing when they turn 40. This hearing loss increases with age and, by the time they reach 80, most will have significant hearing problems. High frequency sounds become more difficult to hear and it becomes harder to understand speech in background noise.

A more recent phenomenon is noise induced hearing loss; something that may become more prevalent as people spend more time listening to music at high volume whilst wearing headphones.

Age and noise are not the only ways that hearing is affected; various medical conditions or injuries can result in a diminution in our ability to capture and process sound. And some are born with malformed hearing.

One of the earliest attempts to overcome hearing loss was in the 17th Century, when ear trumpets were developed. Created from a range of materials – even animal horns – ear trumpets collect sound and feed it to the ear.

More recently, technology has come to the forefront in the battle against hearing loss. Bo Littau is director of category management with Danish company Oticon, founded in 1904 by Hans Demant, whose wife suffered from hearing loss. “Hearing aids aren’t new,” he said. “People have always had this need and technology is providing this support. While it has been an incremental journey, more recently, we’ve entered a period where there have been leaps in technology and the provision of more benefits, including other ways of connecting.”

Roland Heichel, head of corporate marketing with Sivantos – once part of Siemens and which traces its history as far back as 1878 – noted: “We see connectivity as a major driver; wireless allows hearing aids to receive information from other sources – such as streaming a phone call – and enables the instruments in a binaural system to exchange information. This is very important for localisation.”

Both Heichel and Littau stress the importance of localisation, noting the brain can process sound binaurally more readily than by using only one ear. “It’s a better way for the brain to process sound,” Littau said, “so we can link two instruments wirelessly.”

Littau pointed out that hearing aids were once large analogue devices carried on a cord around the neck and powered by large batteries. “The advent of transistors has made them much smaller,” he added. “People have had the need for hearing aids and technology is meeting this need.”

The move from analogue to digital technology has made a big difference. Littau continued: “Analogue amplifiers didn’t provide the support which many people needed. The amount of gain and equalisation was insufficient and, because everyone has different needs, we needed a programmable solution. Chips could be made small enough and a race started between a number of manufacturers. People want to live a normal life and it’s up to us to translate that need using technology.”

Heichel said people want hearing aids so they can understand more of the world around them. “They want to use phones, listen to television. We’re always looking for technology that will help them.”

The size and inconvenience of the analogue hearing aids of the past were some reasons why people shied away from them. Now, digital technology is enabling devices that fit inside the ear canal. While these overcome some previous problems, this creates some significant challenges for manufacturers.

Both Heichel and Littau agree the major design constraint is power consumption. Heichel said: “There hasn’t been much improvement in battery technology and capacity is a limiting factor.” Littau said: “They can’t draw more than 1.5mA; that’s a definite constraint for designers.”

Typically, batteries will last for up to 14 days, depending on the hearing aid, but their life will be shorter for invisible aids. Rechargeable batteries are now coming into use. Heichel said their capacity of 22mAh provides enough power for a day’s use, but this requires overnight recharging.

Alongside the constraint of power is size, particularly with in ear devices. “Size is a limiting factor for the microphone,” said Heichel, “and we can’t make the speaker any smaller because we need to generate a certain amount of sound pressure. Meanwhile, the battery remains a relatively large component.”

Compromises can be made, however, with behind the ear devices. But sound then needs to be transmitted into the ear using a tube, which affects the acoustics and reduces the level of high frequency sound. Littau said: “The benefit of an in ear device is that it can take advantage of the ear, which is designed by nature to capture sound.” Littau says the speaker will typically generate 115dB.

So what is inside a modern hearing aid? Littau said there are three elements: an analogue front end; a DSP; and a radio module. “These could be used as three discrete components or packaged into one device.

“The front end is the first processing step, with three input stages, each with a 24bit super linear A/D converter.”

Heichel said Sivantos’ aids featured ‘three or four’ A/D converters, along with two microphones. “If there’s a t-coil,” he added, “that will need another A/D converter.”

Both companies take the incoming sound and process it through the front ends. “Frequency range is important,” Littau said, “but the more sound you sample, the more power you use – it’s a trade off.”

Oticon’s front end takes a 10kHz wide sample and chops this into 64 channels that can be processed by the DSP. Sivantos’ devices have a 12kHz bandwidth filtered into 48 channels. “Resolution is reduced on lower performance devices,” Heichel noted.

Once sound has reached the DSP block, algorithms can be set to work. “We can do all sorts of things,” said Littau, “such as removing some sounds, amplifying others.” Amongst the tasks undertaken in the processing block are directional processing, noise reduction and feedback reduction. “The ‘whistling’ associated with feedback has more or less disappeared,” Heichel contended.

The amount of ‘muscle’ used to process sounds is impressive. Oticon has eight fixed point DSP cores in the processing engine, with seven of the eight currently in use. “The other core is a spare,” said Littau, “and has been designed in for future use.” According to Littau, the chip – manufactured on a 65nm process – is capable of running 600million microinstructions per second. “We could design for a smaller process, but cost is higher, so there is a compromise. 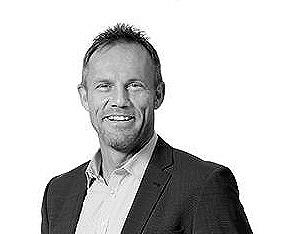 “Ten years ago,” he said, “80% of a similar chip would have been hardwired, because that was faster and more efficient. Today, it’s the opposite, bringing the ability to upgrade features or add new ones designed for particular functions.”

Heichel explained that Sivantos takes a different approach. “We use a highly parallel processing block, with the ability to turn off particular blocks, depending upon requirements. The unit analyses the environment and then decides which features need to be turned on, then performing functions such as amplification and frequency shaping.”

"We've entered a period where there have been leaps in technology and the provision of more benefits, including other ways of connecting." Bo Littau

But it’s probably the advent of Bluetooth and other communications technology that have enabled hearing aid technology to take steps forward. “We’re always looking for technology that will help users,” said Heichel, “and wireless technology helps us to tackle problems.”

Littau noted: “We’ve adopted Bluetooth LE over the last couple of years. It allows us to connect directly to sound sources equipped with the same technology. It adds another layer to the benefits and ease of use.”

While Bluetooth handles communications with other devices, there is also the need for both sides of a binaural hearing aid to communicate. “We use near field magnetic induction (NFMI),” said Littau. “The benefit is that, although it takes power to transmit from one side to the other, you get some energy for free on the receive side.”

NFMI differs from regular radio technology in that energy is contained within a localised magnetic field. Using a frequency of 13.56MHz, data is transmitted over distances of no more than 1m. “The power required is low,” Littau continued, “but the range is enough to exchange data between instruments on either side of the head. And we can transmit a full audio signal in real time between both ears ”

One of these instruments is running all the time, the other is for external connectivity with Bluetooth LE enabled sources.

Linking with the IoT
With Oticon’s Opn technology, it is possible to program hearing aids to communicate directly with connected devices such as door bells, smoke detectors and baby alarms. Opn is the first hearing aid that connects to and interacts with the Internet.

“With Opn, we’ve taken a giant leap forward – for both hearing aids and the IoT,” said Søren Nielsen, Oticon’s president. “With Opn, the IoT starts to matter – you could say that this will change people’s lives.”

“Our two ears help the brain to localise where sound is coming from; for example, by time delays. When information is exchanged, it enables very good directional hearing, particularly in restaurants.

“Our target is to recreate natural hearing; ideally, the user will just put the devices in their ears and forget them, because it’s automated. But this needs a lot of logic and algorithms to determine which features need to be turned on or off.”

Below right: The easyTek App allows the user to control their hearing instruments via a smartphone 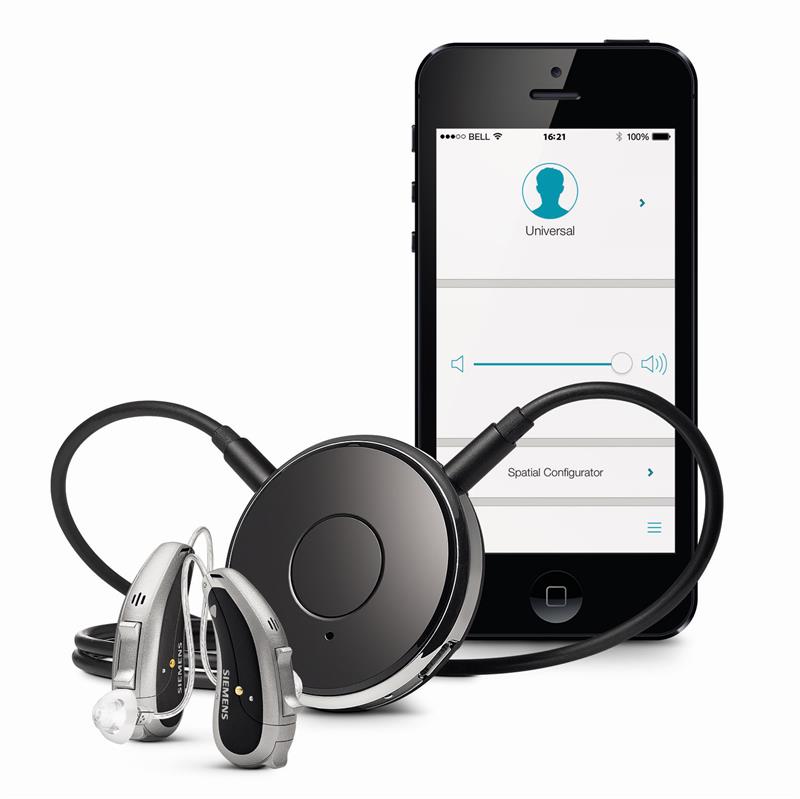 In many cases, pride stops the hard of hearing from getting help in the form of hearing aids. But another reason is that hearing loss happens so gradually that you don’t realise it. “By that time,” said Heichel, “the brain ‘forgets’ how to use some sounds. Sometimes, people are surprised by what they can hear again; sometimes, they need to relearn how to hear.”

So what’s the future for hearing technology? “We will go where the needs are,” Littau said. “There will be a general need for devices which counter age dependent hearing loss; it’s just a matter of how we provide that and the benefits we can add.

“But future devices will need more processing power, more memory, more speed, more wireless and more sensors, all packaged in a device that fits in the ear,” he concluded. “And maybe we can develop a device that can also measure temperature and record the wearer’s EEG.”

OUTLOOK 2018 – Helping you to make the right technology choices