Microchip Curiosity Nano (or MC Nano) is a development platform dedicated mostly for 8-bit PIC and AVR microcontrollers. They can also be used to develop applications equipped with some of the 32-bit products from the PIC32 and SAM families featuring ARM® Cortex® architecture. Regardless of the system, the Curiosity Nano platform is developed to maximally accelerate the design of new applications and, as a result, to shorten the time between the prototyping and the mass production stages. 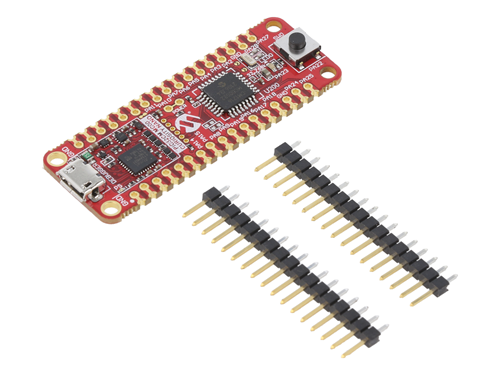 Development boards comprising the platform come in many sizes (lengths), depending on the size of the applied MCU. The smallest boards are dedicated to systems with 20 terminals (including 16 GPIO pins), whereas the biggest ones include MCU in an enclosure with 48 terminals, which translates into 40 input/output pins. Regardless of the length, products included in the platform share key physical (e.g. board width, terminal pitch, presence of a MicroUSB socket used for power supply, communication and programming) and technical features, for convenient migration between different models. 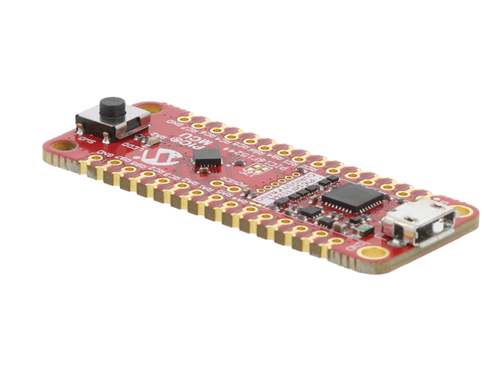 The Microchip Curiosity Nano platform has a range of main features shared by all the models of this series. In the central part of the board, there is a microcontroller (C) whose pins are connected to fields on the edges of the PCB (F) and a quartz resonator (D). For the purpose of simple prototyping, there is a button (A) and a LED indicator (B) installed on the board. Unlike the Arduino platform, the switch does not work as a reset; it is attached to the microcontroller’s input/output pin (address of a dedicated terminal is marked on the PCB, it varies depending on the models in the series). The USB Micro socket (G) is used for communication and power supply purposes. 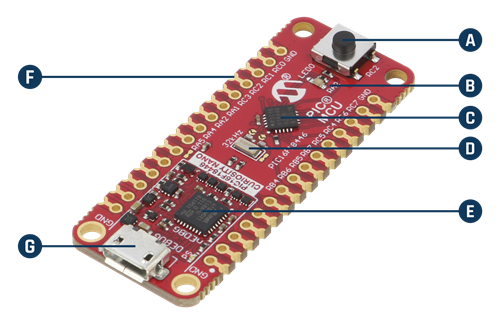 One of the assets of the Microchip platform is that the terminals are standardised. Regardless of the selected board model and the microcontroller installed on it, the fields on the PCB edges are connected to the pins of the programmer, debugger and central system of the same functionality. Therefore, the order of the connectors on the board is not equal to the numbers of the microcontroller’s terminals. It is, however, identical within the MC Nano series.

Functionality of a built-in debugger

Microchip Curiosity Nano debugger built in the board (also referred to as PKOB nano, nEDBG or nano debugger) has a basic functionality, i.e. controlling the execution of the programme, (flow control – start, stop, stepper release, reset); reading and recording the contents of retentive memory of the microcontroller; managing the traps (breakpoint), whose number depends on the system type.

Base board and compatible modules

TME offers a range of accessories and complementing products that will make the first steps with the MC Nano platform easier and improve the prototyping works as such. The standardisation of terminals in the product series by Microchip makes it possible to use them with adapters, extension boards and digital modules such as sensors, controllers, interfaces etc.

Curiosity Nano Base prototype board with terminals for Click modules. 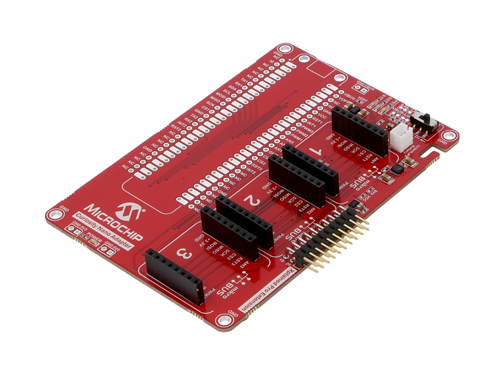 Each MC Nano model can be put in the base board using a pin header connector. TME offers two such models: the AC164162, equipped with compatible connectors including modules by Mikroelektronika and Microchip and the AC80T88A evaluation kit that can be connected to products from the Xplained Pro family. In both cases, the user has access to a separate power switch and independent terminals of all ports. They also get a comfortable and stable stand that improves the comfort of work. An undeniable asset of the AC164162 model is a built-in battery charging controller. It improves the process of prototyping mobile devices – applications for which many Microchip microcontrollers are intended.

Thanks to the standardisation of the communication terminals within the MC Nano series, these products can be quickly connected to many standardised modules – in particular to the Click® series by Mikroelektronika. It is currently the biggest family of universal extensions for microcontrollers. It uses the MikroBUS standard for data transmission, which combines several methods of communication. Currently there are over 1000 products from the Click® Board family available in the TME offer. That includes many communications systems (RF, Wi-Fi, Bluetooth, ZigBee, GSM), sensors, meters (ammeters, voltmeters), useful accessories such as memory card and RFID readers, GPS receivers as well as interface components (buttons, keyboards, controls) and numerous less common circuits, e.g. mixed circuits (FM and AM tuner) or audio amplifiers.

One of the biggest assets of the MC Nano series is a wide selection of microcontrollers that can be installed in this platform. The table below presents the systems that are currently available directly from the TME catalogue, however, that range is certainly going to be expanded.

It is already clear from the current portfolio of products on offer how wide the range of prototype boards from the Microchip Curiosity Nano family is. When it comes to simple mobile applications, where energy efficiency is the key factor, boards equipped with ATTINY systems are the best choice (DM080104 board is a great example of such product), as they are adapted to low power consumption designs and work excellently as controllers, for example in electronic household appliances or in the automotive industry. PIC16 microcontrollers with CIP (Core Independent Peripherals) also feature very low power modes (eXtreme Low-Power). They constitute integrated systems that can operate independently from the core and even wake up the microcontroller from the sleep mode by causing interruption determined by a programmable parameter (e.g. exceeding the set voltage at the input of the A/C converter).