The CMOS image sensor market is forecast to continue reaching record-high sales and unit volumes through 2023 with the spread of digital-imaging applications offsetting weakness in the global economy and the fallout from the US-China trade war.

CMOS image sensor sales are projected to rise 9% in 2019 to an all-time high of $15.5billion, followed by a 4% increase in 2020 to $16.1 billion (Figure 1), according to IC Insights’ 2019 O-S-D Report - A Market Analysis and Forecast for Optoelectronics, Sensors/Actuators, and Discretes. 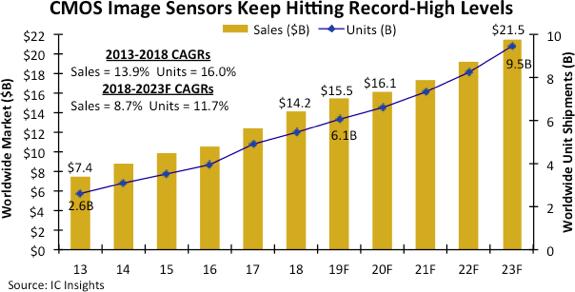 IC Insights is forecasting an 11% rise in CMOS image sensor shipments in 2019 to a record 6.1 billion units worldwide, with a 9% increase in 2020 to 6.6 billion when the global economy is expected to slow sharply, partly because of the tariff-driven trade war between the U.S. and China.

In 2018, CMOS image sensor revenue grew 14% to $14.2 billion after climbing 19% in 2017. CMOS image sensor sales have hit new-high levels each year since 2011 and the string of consecutive records is expected to continue through 2023, when sales reach $21.5 billion, according to the O-S-D Report.

Worldwide shipments of CMOS image sensors also have reached eight consecutive years of all-time high levels since 2011 and those annual records are expected to continue to 2023, when the unit volume is expected to hit 9.5 billion.

Camera cellphones continue to be the largest end-use market for CMOS image sensors, generating 61% of sales and representing 64% of unit shipments in 2018, but other applications will provide greater lift in setting annual market records in the next five years. The O-S-D Report shows automotive systems being the fastest growing CMOS image sensor application, with dollar sales volume rising by a CAGR of 29.7% to $3.2 billion in 2023, or 15% of the market’s total sales that year (versus 6% in 2018). After that, the highest sales growth rates in the next five years are expected to be: medical/scientific systems (a CAGR of 22.7% to $1.2 billion); security cameras (a CAGR of 19.5% to $2.0 billion); industrial, including robots and the Internet of Things (a CAGR of 16.1% to $1.8 billion); and toys and games, including consumer-class virtual/augmented reality (a CAGR of 15.1% to $172 million).

Revenues for CMOS image sensors in PCs and tablets are expected to rise by a CAGR of 5.6% to $990 million in 2023, while sensor sales for stand-alone digital cameras (still-picture photography and video) are projected to grow by a CAGR of only 1.0% to $1.1 billion in the next five years.