It’s true to say that when a new technology appears on the market it is often accompanied by its ‘opposite’ – the bad versions that are used for various, invariably, criminal activities – and this has been true of the drone market, both here in the UK and around the world.

The drone that caused chaos at Gatwick airport is a case in point. It showed up how unprepared one of the UK’s leading airports was to the threat drones can pose.

“It was, however, a one in a thousand incident,” according to Richard Gill, the CEO of Drone Defence Services, a UK company which provides security against the actions of unmanned aerial vehicles or drones.

“You have to remember that this incident was carried out by someone very determined and with a very good working knowledge of drone and counter-drone technologies.

“Security or operational managers at facilities like Gatwick have a lot to contend with and only have a limited budget with which to operate. With the events at Gatwick it’s now possible to work out the costs of such an intrusion – Easyjet’s own impact assessment put the cost of the disruption at over £50m – so it’s now a lot easier to understand the risks and obtain a budget to counter this type of threat.”

According to Gill, Gatwick changed everything in terms of the drone defence sector.

“It helped to accelerate government engagement and has helped us speed up the development of new products for agencies looking to defend themselves against drones,” he explains. “Our customers, and the industry itself, better understand the anti-drone portfolios that are available to them and how, when and where they can be used.

“There is certainly more direction when it comes to the requirements associated with counter drone technology and that will continue to evolve over the coming 12-18 months. Greater regulation, rather than legislation, will engender more trust in the equipment that clients are looking to buy – and that will play a critical part in terms of the growing maturity of the market. 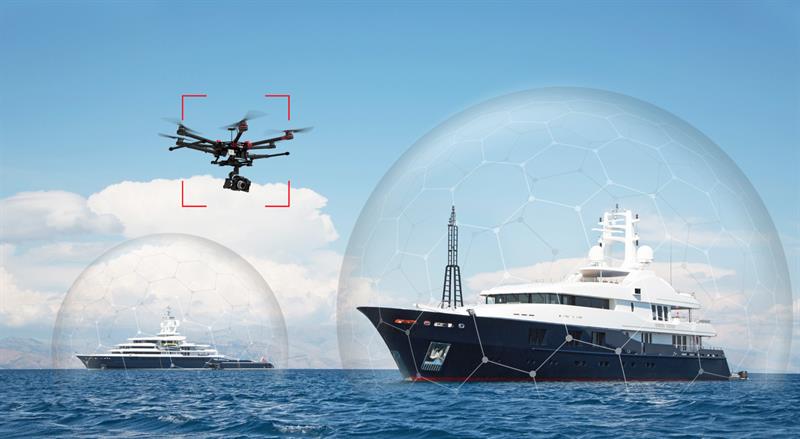 “You can talk about security theoretically but what Gatwick did was to demonstrate the risk from drone intrusions and, more importantly, the cost of doing nothing. Security tends to be reactionary and organisations now understand that they need to plan and prepare to counter this threat.”

A small consultancy, Drone Defence has tended to outsource production, but is now changing its approach.

“Post Gatwick, we are going through a profound period of change,” explains Gill. “We are looking for seed round funding and are working to bring all that outsourced expertise into the business. Now is the time to do that as the market evolves.”

Despite the events at Gatwick, Gill warns against ‘demonising’ drones and says that while people will abuse this technology, there is a positive argument that needs to be made about their uses.

“I believe that drone technology will change the way we view, interact with and move around the world,” he says. “It’s a transformative technology and I believe that UAVs will have a massive, and positive, impact on the way people live.”

While Gill is a great proponent of drone technology and the benefits it can bring, he has built a company which provides security against the actions of drones.

Established in 2016, Drone Defence Services is the UK’s first drone focused security consultancy and it offers a range of different technologies, techniques, and procedures to help individuals and organisations to protect themselves from unwanted drone intrusions. For example, its SkyFence system has been deployed at Guernsey Prison to stop drones flying drugs to inmates and it has devised a portable system, the Dynopis E1000MP, which is being used to protect VIPs.

“With any new technology there’s a dark side, so drones are being used to smuggle contraband into prisons, disrupt airports and planes, and invade people’s privacy. Drone Defence was established to counter that threat,” Gill explains.

Gill set the company up after leaving the army, where he’d served as an officer in the Royal Logistic Corps. 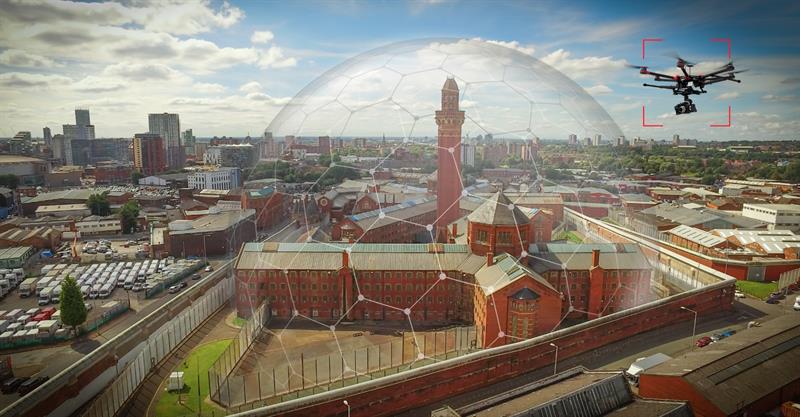 “It was while I was in Afghanistan that I first saw the extensive use of drones by coalition forces. They were being used to collect information that was then streamed around the battlefield. At the same times there was a fast growing, emerging commercial market for drones. When I left the army I decided I wanted to get involved.”

Gill did an MBA at Northampton University, as part of a scheme made available to armed forces personnel, and used his time to conduct research into the commercial opportunities that drones afforded. It was during discussions with clients that he realised there was a demand for counter drone technology.

“These early client meetings usually turned to a discussion about the negatives around drones, so I formed a company to prevent their malicious use,” he explains.

Among the devices and technology that have been developed is a net gun and a portable backpack jammer. Gill explains that the company is focused on disrupting the radio communications between an operator and device.

“The radio link is the critical component when it comes to defending against drones,” he explains. “We want to be able to take control away from the user, not to destroy the device. Our aim is to return it to the operator.”

Drone Defence categorises various levels of security. So, from facilities that need permanent protection, such as airports and prisons, where signal and disruption techniques can be employed to block radio links, to events that don’t need protection all the time, such as sporting events, the company has developed different methods and technologies to counter rogue devices.

“While there is legislation that prevents some drone usage we want to be able to use a proportional response to drones being used incorrectly. Our approach can be defined as track it, identify it and then act. If we find that a drone is acting in a hostile manner we can then, legitimately, jam its signal, turn it around and get it to fly home.

“That’s fine if the drone is being flown in line of sight; if it is being flown in an autonomous manner then that’s a different level of problem. We would pass details on to the authorities and it would be their decision as to whether they would look to bring it down.”

Recently launched by the company, AeroSnare has been designed to allow organisations, such as police forces, to upgrade their own drone fleet and turn them into drone defence interceptors.

“A number of police forces are testing AeroSnare,” says Gill. “It works by being attached to a ‘friendly drone’ and the aim is for the security drone operator to fly the friendly drone over the offending drone. A Kevlar trailing line is then used to snare the offending drone’s propellers causing it to stall and lose lift. As the drone stalls, it pulls a parachute out of the AeroSnare and then descends gently to the ground.”

According to Gill, “The application is simple and we can upgrade commercial drones with the ability to intercept and safely interdict illegally flown drones.”

Another product is SkyFence, which is deployed around a perimeter fence and uses low power directional antenna technology to jam the radio signal between the operator and drone.

“The various ‘boxes’ are located around a base, usually every 40m around the perimeter, and are intended to do the bare minimum to stop a drone entering an area illegally.”

When it comes to regulating the market Gill is opposed to what he sees as something that could stymie innovation. 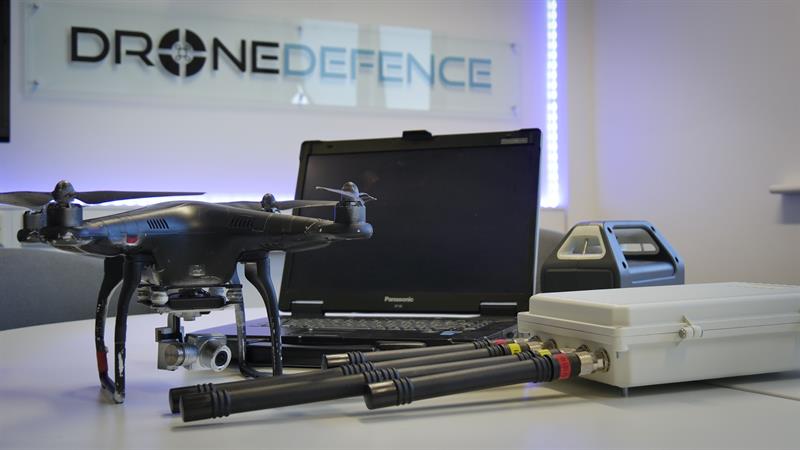 “In truth, those operators getting up to serious mischief wont be the ones affected by legislation. Rather it will be the hobbyist and the casual user. We need an environment that encourages innovation and commercial experimentation,” Gill believes.

A report from PwC has estimated that by 2030, there will be more than 76,000 drones in operation across UK skies.

“The more drones that we see, the more that entrepreneurs will deliver new ways of making money out of them,” says Gill, who thinks that the next couple of years will be critical in the development of the drone market and argues that it is vital that the industry, or broader drone community, have one consolidated and positive voice.

“We need a lobbying group to promote the interests of this burgeoning industry, but that will be a challenge,” he concedes.

Gill believes that drone technology is set to become more capable and attitudes towards the use of drones will evolve, with people becoming more accepting of it.

“The potential for drone technology is massive but I do think there is a natural pace in terms of development. As the market evolves I think people will start to wake up to its ‘good’ potential and to the opportunities it can afford them.”

Wearable electronic could be a 'game changer' for stroke recovery treatment