The Queen Elizabeth Class carriers are intended to provide the UK’s armed forces with a four-acre military operating base capable of being deployed anywhere around the world.

Standing 280 metres in length, 70 metres wide (flight desk) and 73 metres keel to masthead, the carriers are impressive feats of engineering but so too are the electronics that lie within them, as Martin Douglass, Engineering Director at the ACA and Chief Engineer of the Queen Elizabeth Class aircraft carrier programme, and Pete Jewson, Combat System Design Authority, reveal.

Breathing life into the vessel
To achieve the mission, and ensure the vessel is always on hand to embark and support the aircraft, the QEC class has a suite of power, propulsion and platform systems utilising a variety of stand-alone networks, some integrated throughout the platform. These systems are the lungs of the vessel – literally in some cases, supplying the air that allows the vessel to breath.

“Key to endurance and efficiency is the ships full electric propulsion system, a derivative from the design utilised on the T45 destroyers benefitting from many of the lessons of the class,” explains Douglass. “The QEC power plant consists of six generators, four Diesel Generators (DGs) and two Gas Turbine Alternators (GTAs), with a total of 110MW capacity – enough to power a town the size of Swindon.

“These supply a HV distribution system, which incorporates four HV switchboards with passive harmonic filtering. Three of the four switchboards supply power independently to the four propulsion motors (total 80MW of propulsive power with two motors per shaft), facilitating the disparity in rating of the DGs and GTAs, but also enabling the separation of propulsion from much of the ship’s systems supplies. This design provides flexibility of supply and resilience to failure that meets the demanding needs of flying operations both in peace time and when on a war footing.”

“Embarked aircraft are some of the most advanced in the world and today’s operational environment requires data from a range of sources and sensors to be synthesised for effective utilisation – this to the 1,600 personnel internally (with an embarked air group), and externally to/from the carrier task group and the shore-based national and international HQs. At the core of this construct is the integrated mission system formed of three capabilities real-time systems area (RTSA), communications system, and information systems.”

RTSA has at its core the combat management system (based on the RN T45 Destroyer design), augmented by the RDS 1600 Air Traffic Management System as used at land-based naval air stations, modified to deal with a moving airfield. The use of these critical and pre-existing building blocks has dramatically reduced the level and extent of integration testing and supported early crew familiarisation. This drive to exploit pull-through, as opposed to newly developed systems, has extended to systems such as the S1850M Long Range Radar, the ARTISAN RT997 Medium Range Radar and the Meteorological System, similar variants of which are all proven on other RN vessels. New to RN service are the Navigation System (developed from a commercial application), the dual-island mounted Identification Friend or Foe system, the visual surveillance system (some 200-plus cameras) and the Instrument Carrier Landing System.

The twin island QEC design has created both opportunities and challenges, in terms of the placement of emitters. There is more real estate to position these and achieve physical isolation between TX & RX antennae. However, two large structures relatively close together impede the ability to achieve uninterrupted 360-degree coverage. This latter issue has resulted in the adoption of multiple sensors/antenna on both islands to ‘fill the coverage gaps’, which has driven the complexity of the topside design. Consequently, there are upwards of 117,000 electro-magnetic interactions that have had to be considered in determining and arriving at a viable design.

“The ‘communication systems’ capabilities encompass both on and off-board services, covering everything from internal desk phones through to external radio channels and satellite communications links,” adds Jewson. “The overall suite of systems facilitates the sending and reception of data, video and voice, at classified and unclassified levels, throughout the ship and off it at frequencies from HF up to UHF, approximately four times that on the previous RN carrier.” 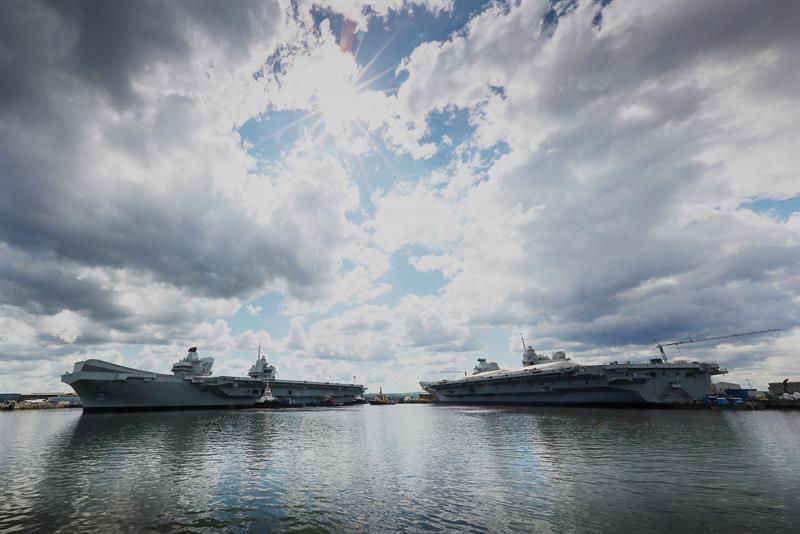 Above: Both carriers together in Rosyth shipyard

In control
Key to the communications suite is the Communications Configuration Management System, which allows all services throughout the ship to be either dynamically modified under remote control on an ‘as demanded’ basis or to be holistically pre-planned offline and then activated via named wholeship configurations, as operational scenarios dictate. This flexibility allows services to be managed coherently by a small communications management team from command positions of their choosing.

In addition to the normal ‘hard-wire’ internal communications suite, the design includes a wireless communications system (WCS) operating throughout the ship and on the flight deck via the use of ‘leaky-feeder’ signal distribution paths and repeaters. This scheme provides a trunked carrier to all locations facilitating personnel through hand-held radios, other than within certain EM-protected spaces, which have their own dedicated provision. Likewise, WCS users can be patched through to use off-board radio services, opening up the ability (for instance) for flight deck personnel to communicate directly with aircraft.

The final major capability area is the information systems. As well as individual systems, this includes the networked infrastructure, integrating all the sensor, communications, and brings together the mission planning and data exploitation applications. The information systems are connected by a fibre-optic network (utilising around 1,800 Km of glass). This includes the Defence Information Infrastructure (DII), which enables the crew to interact on anything from personnel and medical records, through to logistics and stores.

Hosted on this network, the Air Group Management Application supports the management of aircraft movement across the hangar and flight deck spaces, integrating data such as aircraft serviceability, pilot availability and weapons status. The information systems also include planning and decision aids, imagery exploitation systems and additional specialist applications that enable the embarked aircraft to conduct their mission.

Douglass and Jewson have found it deeply satisfying to see so many innovations built into the vessels, with the majority of the technology employed proven and mature. “That said, the novelty and challenge has been in how to utilise this and integrate it into a vessel of this size to deliver the capability required by the Government of this strategic asset, within the agreed unit cost and projected though-life operating costs,” Douglass concludes. Truly, these are two 21st century ships that will literally carry the day.

Security challenges in the e-enabled aircraft

Bridging the gap to the future