Time holds the key to 6G

5G is still in the early stages of its rollout but the attention in R&D is now on the next generation to come, even if its launch may be some way off.

At the VLSI Symposia 2020 in June, Takehiro Nakamura, senior VP and general manager of 5G Laboratories at NTT Docomo, said he expects 6G to arrive a decade from now. But geopolitics driven by the US even with a change in administration may play a role in speeding up the development of follow-ons to 5G.

In an online seminar earlier this autumn organised by Stanford University's Institute for Human-Centered Artificial Intelligence (HAI) group, Mike Brown, director of the US Defense Innovation Unit, pointed to the way in which Chinese suppliers had overtaken telecom suppliers based in the west: "On 5G, we were asleep at the switch: we've let telecoms leadership leave the US."

Brown said that country had two choices. One was to embrace technologies that would make it easier to swap hardware in and out of the networks, an approach that the Open-RAN set of standards were created to allow. The other is "to leapfrog and go to 6G". In October, the Alliance for Telecommunications Industry Solutions (ATIS) formed the North America-focused Next G Alliance that will run in parallel with efforts in Europe and Asia.

The situation may resemble the prelude to 4G, when some suppliers rolled out additions to 3G that they claimed offered the performance boost the new generation would provide, some with regional tweaks. Even before this fragmentation, the 6G process was likely to follow the one set in the 4G deliberations. "With 4G there was no single representative technology: it was a combination of technologies, which was the case for 5G also. We think 6G will be defined similarly: a combination of technologies for big performance gains,” Nakamura says.

Many of the design targets for 6G look similar to those that drove the 5G effort: even higher data rates but at lower latency and with lower energy consumption per bit. Though applications such as augmented and virtual reality remain niches, technologists such as Nakamura look to those areas as being drivers for the additional performance. The Covid-19 pandemic may have a hand in driving these technologies forward as artificial reality applications will support greater use of teleworking. "Large amount of information will need to be transferred between physical space and cyberspace," he says.

Some of the changes that will be needed for 6G are already happening. Nakamura says machine learning is likely to become ubiquitous in cellular. "We think AI can be used to improve system performance: AI and machine learning should be integrated into everything."

Some companies have already incorporated machine learning into their offerings. Ceva, for example, applied the technique in its PentaG IP cores for 5G a couple of years ago: to handle tasks such as link adaptation on the basis that the many parameters, that affect signal quality, have become too difficult to model well conventionally. Training handsets and base stations to find good settings for different conditions made more sense in Ceva's view. For technologists such as Nakamura, AI would help make higher-level decisions in the future, such as switching between different radio interfaces to maximise throughput. The expectation is that rather than being divided into discrete cells, the future topologies will use extensive overlapping with beamforming driven by MIMO antenna arrays used to direct the signals.

Although AI can help improve performance, radio designers are looking at increasingly exotic mechanisms to try to push wireless data rates towards the 1Tbit/s target researchers such as Professor Gerhard Fettweis of the Technical University of Dresden see as feasible by the mid-2030s. Similar to 5G, one path is to push even higher in transmission frequency.

The use of millimetre-wave transmission lags the core 5G standard. But Professor Ted Rappaport of the NYU Tandon School of Engineering who did extensive work on that frequency range for 5G has moved onto the terahertz range. It is a range presents far tougher challenges not least because conventional electronics fare badly in that range and water absorption limits the range of transmission. It is roughly an order of magnitude worse at 250GHz than at the 26GHz assigned by numerous countries to millimetre-wave 5G. But scientists like Rappaport and Fettweis are optimistic.

Fettweis points to processes such as FD-SOI as candidates for terahertz transceivers. Two years ago, a group working at the University of Wuppertal demonstrated a detector built using GlobalFoundries' 22nm FDSOI technology that operated at more than 800GHz. One big advantage of terahertz operation is that, past 80GHz, the antenna can be integrated into the package of a transceiver IC, which eases the design of MIMO arrays that would be used to steer the beam towards a receiver.

Even with FD-SOI, which can deliver better power consumption for RF designs that conventional silicon processes, power consumption remains one of the big challenges in interface design. Simply scaling up today's analogue-digital converter (ADC) circuitry to handle terahertz frequencies is not going to work. According to Fettweis, taking an ADC that consumes 100mW at 1GHz, its terahertz equivalent could pull down a full watt of power.

At the autumn public meeting of the IEEE International Roadmap for Devices and Systems (IRDS) group, C Michael Garner, "technology consultant and a lead author of the outside-system connectivity chapter of the IRDS", said 6G provides an opportunity to investigate novel approaches to signal conversion.

One direction being pursued by a variety of teams is to take advantage of the way in which CMOS processes are far better at fast switching than detecting subtle changes in voltage, a factor that can streamline the traditional high-speed but large and power-hungry flash ADC. Garner highlighted one example of a circuit developed by a group at NTT earlier this year: "A 6bit converter uses just 10 dynamic comparators rather than the 63 of conventional ADCs," he said.

An evolution of work by Mediatek demonstrated at the 2012 VLSI Symposium, this and similar time-domain interpolation take advantage of the way in which dynamic comparators take longer to settle if the voltage they sense is close to the reference. Much smaller and simpler NOR or NAND switches can detect the difference in time and use that to interpolate between the coarse discrete levels registered by a small number of front-end comparators.

As well as applying four-level interpolation, the NTT circuit added selective activation to cut power consumption to yield a 6GHz circuit that consumes just over 15mW.

6G protocols may dispense with the need to detect voltage changes at all in the incoming analogue signal and even overturn the conventional wisdom of obeying traditional wisdom on bandwidth limitations such as the Nyquist frequency.

Faster-than-Nyquist (FTN) signalling was considered for 5G and is now a prime candidate for going beyond it. Conventional signals keep the symbol rate below the Nyquist frequency to avoid successive bits from interfering with each other. FTN scraps that in favour of a higher signalling rate coupled with more intensive signal processing to try to minimise the inter-symbol interference. 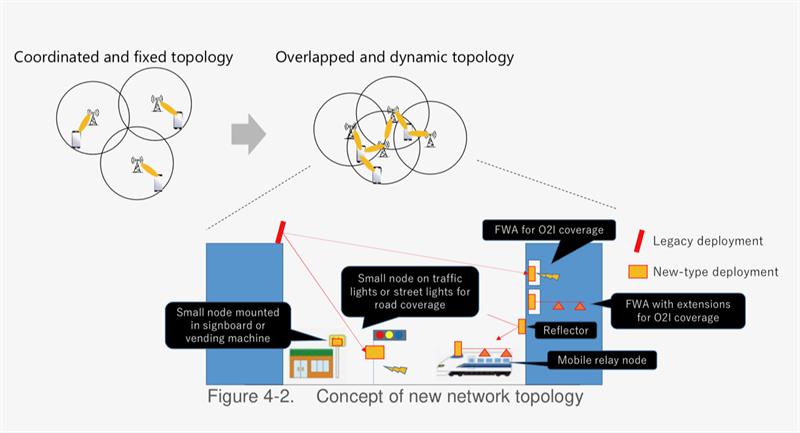 Fettweis and colleagues have proposed what they call a zero-crossing time-based modulation (ZXM) scheme on the basis that CMOS can handle the oversampling requirements of FTN signalling. "This is being investigated by a number of companies. We're told it won't necessarily handle all RF communications but is promising for the future," Garner claims.

ZXM uses oversampling to measure the relative time that a signal is above and below the zero line, using that information alone to reconstruct and demodulate a waveform. Though the encoding seems similar to the run-length encoding of disk drive bitstreams, synchronisation is a much bigger problem in communications. But the Dresden team believe they have techniques that can deal with the problem.

Another beneficiary of the speed-versus-voltage accuracy mismatch in CMOS could be MIMO antenna design. Nakamura points to the VM-MIMO technique, another possible application of FTN signalling. VM-MIMO uses electrical techniques to shift the antenna characteristics at high speed. In turn, this creates a large number of virtual antennas that in turn increase the number of spatially multiplexed layers to try to improve overall reception quality.

More novel circuit techniques will probably need to be found to deliver on the performance targets of 6G without compromising energy targets. But with maybe a decade to go, the likelihood of more being identified seems a safe bet.

Taking technology to the next level

Researchers and industry set their sights on 6G