Building fires are, by their very nature, inhospitable environments. The combination of heat, a potentially toxic atmosphere, poor visibility and an unstable building can have fatal consequences, so it’s no surprise to find out that technology is being brought to bear in an attempt to improve safety, particularly when it comes to communication with and location of firefighters committed to a building.

Gary Walsh, chief fire officer for East Sussex Fire and Rescue, leads on technical operational communications for the Chief Fire Officers Association. “If you look at the history of fires where there have been firefighter fatalities – the Oldham Street fire in Manchester was the latest example – most have been in larger premises and have been tackled by a significant number of firefighters.

“Generally, the hazards to firefighters are heat and flames – what you would expect – but there is also the integrity of the building’s construction. What we’re looking for is a greater understanding of the factors which may have a negative impact on an individual firefighter or on their team.”
It will be no surprise to find out that the main area of interest in understanding where technology is headed is communications. “But that has its faults,” Walsh noted. “It’s radio and there’s always interference.”

The system currently used by the UK’s emergency services is the Airwave network, but this contract expires in 2019. An upgrade to the Emergency Services Network, ESN, is planned, but a recent report by the National Audit Office (NAO) has posed some questions and the House of Commons’ Public Accounts Committee is now looking at the issue.

According to the NAO, while the ESN will provide higher speed communications and more flexibility, there are issues. Its report says the Airwave network covers 97% of Great Britain and has offered 99.9% availability since April 2010. ESN, however, will share a commercial network and coverage is currently only 70%.

The NAO’s conclusion is that ESN is ‘inherently high risk’ and that such an approach has not been used nationwide anywhere.

One potential application of 4G technology – or 5G, when it arrives – is transmitting live video to a remote control centre. Traditionally, a fire incident commander is on site, making decisions based on what they can see. “How far can you take them away from a fire? That’s an interesting question,” Walsh admitted. “What you have to remember is that, in more rural areas, it’s hard to get a phone signal, let alone stream video.” 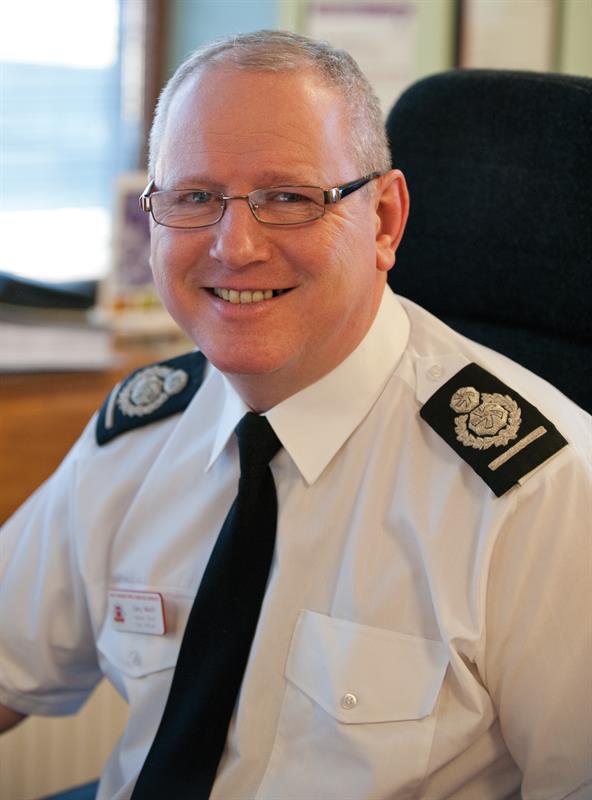 The system, which relayed data about breathing rate and cylinder contents, also incorporated evacuation signals. “But these systems had their faults,” Walsh continued. “There was regular interference and the signal couldn’t always be maintained, which affected firefighters’ confidence in the system.”

Up to a point, these issues have been addressed as changes in spectrum have become available. “UK emergency services frequencies are now more resilient,” Walsh added. “We’re comfortable with that and it provides us with a level of information about the firefighter.”

“As we move to 4G and 5G, we’re looking at how technology can provide the base information to further enable incident commanders to make more informed decisions, based on data beyond just air usage and cylinder contents.”

Walsh said there is a range of data which, if it can be transmitted accurately, could be considered useful. “It can be anything from transmission of the firefighter’s location, whether they are running out of air, whether they have collapsed, their biometrics and so on.”

But Walsh notes that incident commanders aren’t medically trained, so any data that is captured and transmitted needs to be interpreted correctly. “Can this data be translated and transmitted into something that ‘pops up’ and tells you how each firefighter is doing?” he wondered.

“We’re also looking at how we can take CAD drawings of buildings and transfer them electronically to the commander, who can look at them on a tablet, as well as delivering them to firefighters. This can inform decisions about search patterns, for example.”

But, beyond that, he asserted, there is the need for even better communications.

“A number of fire services are looking at how this can be done,” Walsh commented. “The technology exists, but in different formats. Some of the technology we’re looking for is already in use by the military, but it hasn’t yet been translated into products which can be used by firefighters, so it’s still early days.”

Drones
One potential application of new technology is the use of drones. “They can transmit real time video and a number of services have already bought them,” Walsh said. “What drones can do is to provide real time information on the development of the fire, flame and heat movement using infrared images. They can’t go into buildings as yet, but can provide useful information from above. Before, that might have required the use of a police helicopter.”

However, a drone is only useful if it can provide real time information. “A member of the public recently volunteered to take a video from their drone,” said Walsh. “On face value, that was good. But by the time the drone was recovered and the video downloaded, it was 10 minutes after the event. You can’t make decisions about how to fight a fire based on this approach.”

Commercial development
The Fire Service, as a whole, is not a technology developer. “Bringing all this technology together is a commercial decision that needs to be taken by companies that want to get into supplying the fire and rescue sector,” Walsh said.

One company looking to do just that is Analog Devices, which recently unveiled a proof of concept for an IoT solution that tracks the health and location of first responders, especially those in harsh environments.

The approach, developed using Dell EMC’s Infinite industrial IoT testbed, allows the location of first responders and their vital signs to be monitored at all times inside or outside of buildings. It features a sensor equipped vest developed by Hexoskin to monitor breathing rate, breathing volume and heart rate, while a connected boot tracks location and movement. Vest and boot data are collected by an edge gateway, then relayed via a mobile network to a private, secure cloud.

Data from multiple personnel can be displayed on a dashboard for access by control teams on site or in a remote location. Firefighter health can be monitored to ensure their safety.

Jason Lynch, Analog’s director of IoT strategy, said: “Fires are hectic; there’s a lot going on. While some US fire departments have invested in video and screens for central management, what typically happens is that standard communications channels break. What they need is information flowing to someone overseeing things so they can make appropriate calls. If we can get real time data flowing, they can keep people safer.” 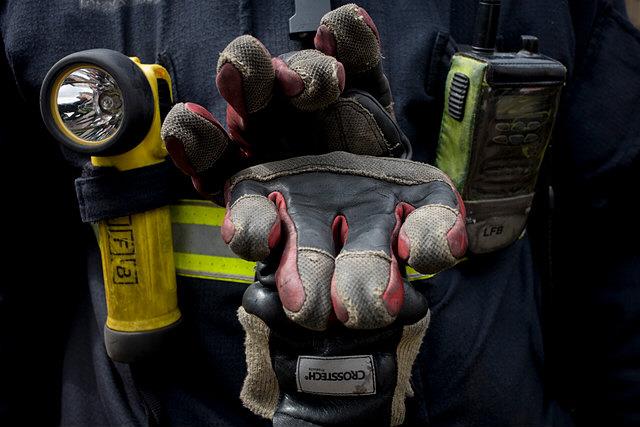 Pursuing a similar approach is US based firefighter equipment specialist Globe. It has led a consortium developing WASP – the wearable advanced sensor platform. This system monitors physical condition and location.

There are two elements to WASP. One is the Zephyr BioHarness, which allows parameters such as heart rate, respiration, activity levels and posture to be monitored. The other is a belt mounted location unit, developed by TRX Systems, which provides indoor location data.

According to the US Fire Administration, stress and overexertion account for 50% or more of firefighter deaths in the line of duty. Factors include the degree of exertion, the thermal environment, wearing heavily insulated protective clothing and carrying heavy equipment. Other factors include the firefighter’s hydration level.

Data from the BioHarness and the location belt can allow a commander to not only monitor the firefighter’s physical condition, but also where they are in a building and whether they might be in danger.

One of the issues which Analog is addressing is firefighter location, particularly in buildings where GPS signals can’t be relied upon. And, according to Lynch, it’s an IoT application, bringing together communications, location technology and – potentially – video.

Lynch admits developing a solution involves solving quite a few challenges – even in a proof of concept. Communications is a big challenge, in Lynch’s opinion. “We need to develop a body area network to handle vital signs; maybe through smart textiles, then communicate that data, as well as location information, to a central hub. Short range protocols could be used as an extension to the body area network and there could be a mesh network between firefighters.

“The boot features an inertial measurement unit,” Lynch continued, “which provides dead reckoning. It’s been moulded into a boot, which makes sense because it’s a piece of equipment already in use.”

It’s likely that narrow band communications, offering a bandwidth of up to 200kHz, could be suitable for transmitting basic vital signs and location. “But we are looking at being able to switch to higher bandwidth links if video is needed,” Lynch added.

Meanwhile, Cambridge Consultants has developed a proof of concept that could be used detect someone’s location indoors and suggests the approach could be used to track firefighters. 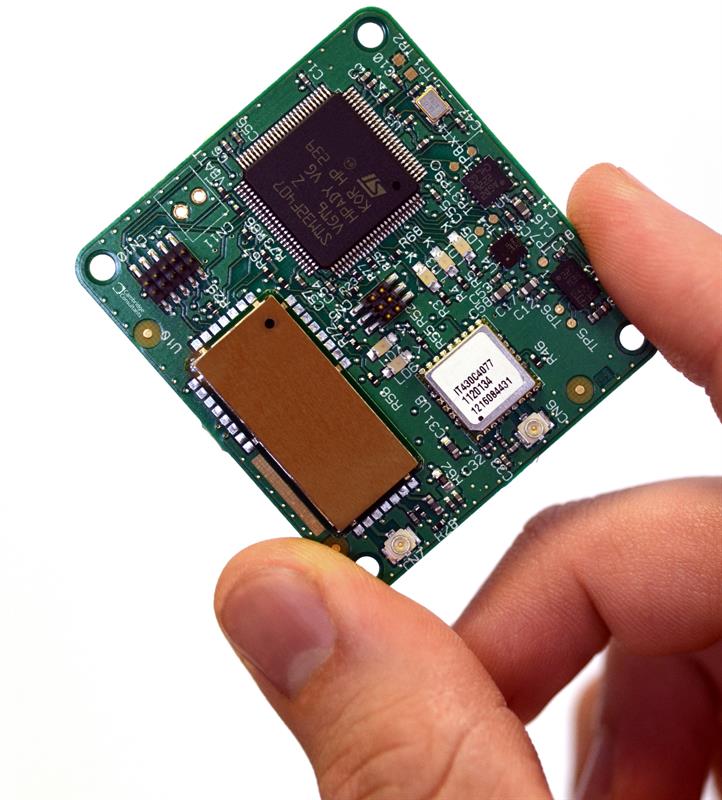 The example system (left) – small enough to clip on a belt and independent of technology within the building – features a number of low power sensors, with a custom algorithm calculating location to within approximately 1% of the distance travelled.

Chris Morgan, a business development manager with the company, noted reliability and accuracy were important. “It’s also important that technology doesn’t interfere with other systems used by firefighters – either physically or from RF emissions.” He added that such technology shouldn’t need input from the firefighter. “We shouldn’t be adding to their cognitive load.”

A number of approaches are available to support indoor location and all have advantages and disadvantages. “Beaconing is one,” said Morgan. “Something on the firefighter transmits a signal, which is triangulated by receivers outside of the building. Triangulation is another possible approach. Multiple transmitters on the outside of the building can be received or retransmitted by a device carried by the firefighter.

“There is also inertial navigation,” Morgan offered. “Using a sensor package on the firefighter, data fusion and processing can determine their current position or a perceived location from a known starting point.”

However, Lynch conceded developing a system to improve firefighter safety was not as easy as it might look. “There is a lot of work to be done to get these sensors and analytics developed,” he concluded.
communications
location
firefighter
fire
Airwave network
radio
video
drone
data
WASP