The department was founded by Ambrose Fleming – Marconi’s technical advisor – in 1885. One of Fleming’s students at UCL was Harold Barlow, who developed microwave waveguides. “That technology was a competitor to fibre optics,” Prof Bayvel noted, “but fibre optics won.” Barlow was the external PhD supervisor of Charles Kao, the so called ‘father of fibre optics’, who won the 1999 Nobel Prize in Physics for his work in developing fibre optic communications technology.

While Fleming founded UCL’s electronics department, the money came from John Pender, who led the successful laying of the first transatlantic telegraph communications cable in 1866.

Meanwhile, this year also sees the centenary of Claude Shannon’s birth, 50 years since Kao and George Hockham proposed the use of glass fibres for communication and 25 years of the Internet.

Prof Bayvel has been at UCL for 22 years. “The ONG is developing academic system engineering, but our approach didn’t exist then. Most research was done in industrial laboratories – for example, STL and BT. They’ve all gone and ONG is now the only lab working on high speed optical fibre data transmission and networking.”

One of the reasons why Prof Bayvel’s group is doing this work is to provide the capacity needed in the future. “While you can always put in extra fibres to provide that capacity,” she remarked, “that involves additional cost, as you have to put in amplifiers and other equipment. We need to find a way to keep costs down by transmitting more information down existing or future fibres.”

Recently, ONG researchers set a record for the fastest ever data rate for digital information. As part of its research into capacity limits, the group achieved a rate of 1.125Tbit/s. In order to achieve this data rate, the team used every property of the light signal – amplitude, phase, polarisation and wavelength – and determined the best way of encoding information in optical signals, taking into account the limitations of the transmitter and receiver. They then applied coding techniques commonly used in wireless communications, but not yet widely used in optical communications, to ensure the transmitted signals were adapted to distortions in the system electronics.

Looking to address capacity issues, UCL partnered with Aston University three years ago to create the UNLOC project – Unlocking the capacity of optical communications. The EPSRC funded programme is focused on optical communication systems and networks that go beyond the current limits of technology, which maximise channel capacity and which are tailored to the nonlinear optical channel.

“We started with the idea of endless traffic growth,” Prof Bayvel said. “People say that capacity is infinite, but it’s not; traffic is growing, but capacity isn’t keeping up.”

Shannon proposed in his eponymous law that there was a fundamental capacity limit to any communications channel. “The problem with fibre optics,” Prof Bayvel explained, “is that it’s non linear; the more power in the fibre, the greater the nonlinearity.”

This comes from the Kerr Effect, which defines the change in refractive index of a material when light and matter interact and reduces the distance over which data can be transmitted. Fibre is non linear and its refractive index is related directly to optical intensity. So the more power which is pushed into a fibre, the more the signal is distorted. 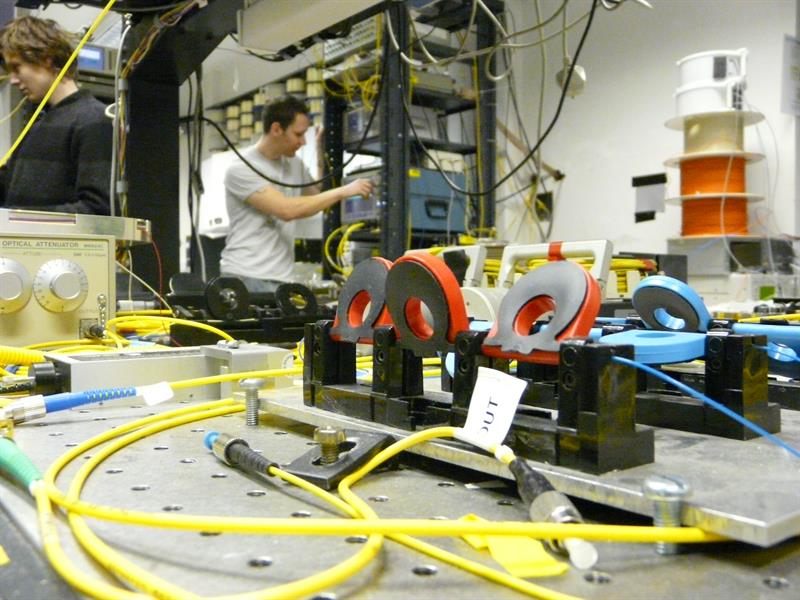 UNLOC says that, to avoid a forthcoming ‘capacity crunch’, where the available bandwidth is not sufficient to meet demand, fibre transmission will have to use the nonlinear region and this will require ‘radically different’ approaches to coding, transmission and processing of information. UNLOC notes that it aims to show that, with the correct application of science and engineering, it is possible to break the nonlinear capacity barrier.

UNLOC researchers use the ONGlab as their core test bed infrastructure, with complementary facilities at Aston University's Institute of Photonic Technologies

The main goal of RT1 is to theoretically analyse nonlinear channels and identify what nonlinear elements are required to design channels with increased capacities. RT2 explores the practical implementation of techniques and technologies required to realise the capacity and spectral efficiency limits predicted by RT1.

Finally, the ideas developed by UNLOC will need to be tested and RT4 is working on an experimental test bed which will support this. UNLOC says that, although different experimental facilities exist in leading laboratories around the world, there is no one place where the issues it is pursuing can be tested with the bit rates and functionality proposed.

Prof Bayvel commented: “We’re looking at such elements as coding, modulation, predistortion and digital signal processing after the signal has been received. Can we do something to the signal using all optical techniques, for example?” 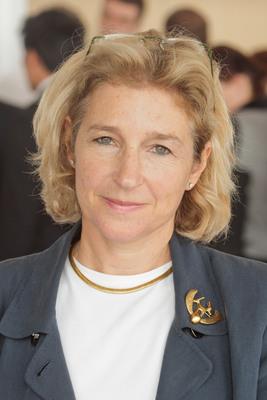 UNLOC believes the best approach will be to take advantage of advanced information theory and DSP to approach the Shannon limit for nonlinear optical channels and to overcome the capacity limit of current systems.

According to Prof Bayvel, UNLOC is looking at techniques that support data rates in excess of 1Tbit/s, potentially with QAM256 modulation and beyond, over thousands of kilometres of fibre. “So far, nobody has been able to do this,” she said.

One area of interest is to improve the performance of the amplifiers used in fibre optic transmission systems. “We need new amplifiers,” Prof Bayvel asserted. “This is now a block to capacity.”

In particular, the team is looking to inrease the 35nm window of the erbium doped fibre amplifier (EDFA). “EDFAs only use 30 to 40nm of the potentially usable optical fibre bandwidth between 1300 and 1600nm,” Prof Bayvel continued. “That’s only 10% of what’s available.” New approaches might include clever designs of Raman based amplifiers and other approaches to maximise the gain bandwidth.

There is also the issue of detecting the signals. “The more you detect, the better you can deal with nonlinearities,” Prof Bayvel said. “But we also need to know how much of the signal needs to be detected. Do we need to detect it all? Actually, you may only need to detect 10%. So if you transmit at 4THz, you need to detect 400GHz. Today, we can detect 125GHz.”

Prof Bayvel was keen to highlight just how far the communications industry has come in the 50 years since Kao and Hockham’s paper. “Then, it was thought that it might be possible to transmit data over fibre at 1Gbit/s. The problem was attenuation – 50 years ago, it was 1000dB/km; now, it’s 0.14dB/km and we’re now playing with every kind of parameter in order to further improve that,” she concluded.

Fibre-optic speeds outside of fibre