"For me science fiction is a way of thinking, a way of logic that bypasses a lot of nonsense. It allows people to look directly at important subjects," so said Gene Roddenberry, the creator of Star Trek.

While we are not looking at the societal impact of science fiction in this article, science fiction has been used to look at and explore imagined or actual science and in many cases has predicted technologies that we now use.

Renowned authors such as Jules Verne, H.G. Wells, and Isaac Asimov described and predicted various technologies that have, over time, become a reality.

In the 1953 novel Fahrenheit 451, Ray Bradbury talked about "seashells" and "thimble radios", devices that resemble earbuds and headsets with Bluetooth capability. Fast forward 60 years, and millions around the world use Apple's wireless AirPods and hundreds of other similar devices.

In his novel, Bradbury even described a digital wall through which people could communicate with one anther – for many, what he described is strikingly similar to the way in which we share messages and information on platforms like Facebook.

The advent of film has built on those achievements and since the 1920s has inspired scientists and technologists to turn, what at first appears to be wild fantasy, into reality.

For many, the science fantasy of films has had a way of entering real life and has predicted some of the biggest scientific breakthroughs of recent years.

Whether it’s the way we communicate with one another, or travel, manufacture devices, treat illnesses or enjoy different forms of entertainment, many of the innovations that we take for granted first appeared in some form on the big screen.

Many of the writers or screenwriters behind filmed science fiction will have had some level of scientific knowledge, or interest, and will have looked to ensure that even the most surreal, or unbelievable, technologies have contained some element of truth based on actual scientific fact.

Others will rely on a stand-in for magic, but even then, as technology has evolved, magic has in some cases becomes a reality.

Star Trek has been a source of much of this predicted technology.

Flip top communicators were made famous by the TV show, and with the arrival of Star Trek: The Motion Picture in 1979, Captain Kirk and his crew were seen using a wrist version of those famous handheld communicators – hello Apple Watch, Samsung Gear, and a host of other similar devices that are now used in ‘everyday’ life.

Films throughout the past 50 years have identified a host of technologies that are now used widely, or are on the cusp of mass acceptance.

In Total Recall, Arnold Schwarzenegger’s character Douglas Quaid summons a ‘Johnny Cab’, which then offers to drive him wherever he wants to go. Today, we have Uber and similar companies and in a matter of a few years we’ll be seeing autonomous taxis on our roads.

The concept of the automated taxi service, seen as science fiction just 30 years ago, is fast becoming a reality and automotive companies are already looking to transform their business models to deliver these new forms of transportation.

Other films that used or presented technologies that are now commonplace include 2001: A Space Odyssey in which video calls, tablets and artificial intelligence, in the form of the ship’s control system HAL, were first shown by Stanley Kubrick in this seminal work.

What’s interesting about HAL is the way in which the crew are seen interacting with the system, as it is how we interact with Siri, Google Assistant, Alexa and Cortana today.

The film Minority Report showed off different types of technology including retinal scanners, touch/gesture-based UI, and targeted advertising, all of which made appearances in the film and are widely used today.

A version of the suit first used by the character Iron Man and which has appeared throughout the Marvel film franchise, since its first appearance over ten years ago, is now being developed by the US military.

Films like these, along with Back to the Future and Star Wars, have done much to inspire new technologies.

According to Professor Carsten P. Welsch, Head of Communications for the Cockcroft Institute and Head of Physics at the University of Liverpool,

”Films like Star Wars and Back to the Future have certainly inspired me. Today I’m watching Picard on Amazon Prime.

“A lot of the technology we see on the cinema screen, and that appeared beyond our reach, was based on scientific principles. Throughout the production of Star Wars scientific advisors were employed to ensure that what we saw could quite possibly be linked to current technologies and could, in time, become fact.

“The science fantasy associated with these films has predicted some of the biggest scientific breakthroughs of recent years.”

According to Professor Welsch some of those technologies include: proton torpedoes which were used to destroy the Death Star by Luke Skywalker in probably the most iconic scene in the very first Star Wars film; light-sabres, as used by the Jedi; hovering land speeders as seen in the first Star Wars film or the speeder bikes used by Luke and Princess Leia as they flee storm troopers in Return of the Jedi.

“All of these were science fiction but based on science and are now a reality in many different spheres of life,” explained the professor.

“While proton torpedoes are not being used to ‘blow up’ Death Stars they are being used in hospitals to target cancer cells hidden deep inside the body.”

This type of proton therapy is currently being used in the Christie Hospital in Manchester.

“It uses the same principles to guide protons to a specific cancer, avoiding healthy tissue, and then releases the energy of the proton to destroy the cancer. It’s a treatment that’s being used to tackle deep-seated cancers, such as prostrate or brain cancer, which have defined volumes and which, through diagnostics, can be more easily located.

“Typically, treatments are spread over a few days. The patient will require 10-20 treatments and they will be conducted in a clinical environment. Each treatment is no longer than what it would take for an x-ray and there are no immediate side effects. By comparison, it is much less traumatic than other existing types of cancer treatment.”

While there are plans to roll this service out across the NHS, the technology still requires a daily quality assurance process and the use of sensors to ensure that the right dose is always delivered and the machine correctly calibrated.

“Tumours in a moving organ provide a big challenge and you need to be able to track its location during treatment. You need to be able to follow the motion of the patient as they breathe, but that’s something online diagnostics and controls will be able to deliver in time, enhancing the treatment that’s available,” according to Professor Welsch.

Droids, carbonite and The Force

Two of the most iconic characters in the Star Wars films are R2-D2 and CP30. These droids may have performed a ‘Laurel and Hardy’ double act but today we live in a world where AI-enabled machines and robots, home voice recognition devices and driverless cars are a reality.

“They are all around us and drones are already being widely used for things like agriculture and warfare.”

There are many concepts that first appeared in Star Wars and on which scientists around the world are working, according to Professor Welsch.

“Although the light sabres that were used in the films wouldn’t be possible, according to the laws of physics, there are many exciting applications that are already real, such as laser knives for high precision surgery, that can be controlled by robot arms.

“If we look at the concept of Industry 4.0 we can see adaptive manufacturing using lasers for creating complex structures in metals.

“We also use lasers to realise extremely high electric fields and build particle accelerators that are up to 1,000 times smaller than current technology. This has huge potential to enable entirely new fundamental research and applications that will benefit society."

In another famous scene from Empire Strikes Back, Han Solo is frozen in carbonite then brought back to life after being captured by Darth Vader and Boba Fett.

“Today, very cold temperatures, close to absolute zero, are used to create a vacuum pressure in a particle accelerator that is better than outer space. These cryogenic temperatures also enable new sensor techniques that are more sensitive than any other technique,” Professor Welsch explains.

Turning to the Force, which was used in the films to move objects - the Jedi (the light side) and Sith (the dark side) employed the Force in a manner similar to telekinesis to hold and move things with their minds. “Matter and antimatter can be seen as resembling the light and dark side and give us unique insight into the fundamental laws of nature,” according to the professor.

“Antimatter is used in Jedi interceptor hyperdrive rings to provide a starship with enough density to remain in hyperspace, as the interceptor is not large enough to retain supralight speeds without external aid. 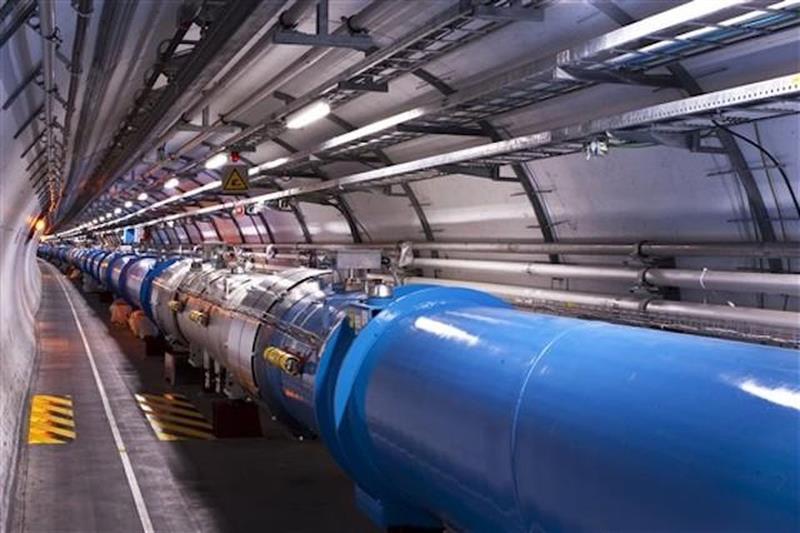 “A new facility based at CERN, the Extra Low Energy Antiproton ring (ELENA) is the first and only facility in the world to store and deliver cooled antiproton beams at low energy and researchers, from the Cockcroft Institute, are now taking a closer look at these mysterious particles to try and understand why it is that all matter in the universe created after the Big Bang is not accompanied by an equal amount of antimatter, or particles with an opposite charge.”

As Professor Welsch explains, “Our detectors provide us with a much better insight into low energy antimatter beams, so that we are able to understand and control them better and carry out experiments which would have previously been impossible.

“Such experiments have the potential to rewrite our assumptions about nature and the properties of space and time, making it one of the most exciting fields of research out there.

“Usually we study how to accelerate sub-microscopic particles, but it is definitely an interesting question whether antimatter or high power lasers could be used for spacecraft propulsion.

“If we can find ways how to create and store large amounts of antimatter, then entirely new applications could become possible.”

With plenty more science fiction blockbusters hitting the big screen, should scientists be taking a closer look at film if they want to get a better glimpse of the future?

Planning for the future

Connecting with the future

The future of research