Could the mining industry be at an inflection point with a historically conservative industry finally starting to embrace new technologies?

Inmarsat, the mobile satellite communications company, suggests in a new report that the mining industry has started, if cautiously, to invest in the development and deployment of IoT-based projects.

In ‘The Rise of IoT in Mining’, it argues that with the mining industry under growing pressure to boost its growth and profitability, it is now seriously looking at the IoT.

Mining companies want to do more, with less, but to date, many projects have been relatively simple, in part, because the technology has to overcome a number of challenges specific to the mining industry.

As Joe Carr, Global Mining Director, Inmarsat explains, “Connectivity is often unreliable, cyber-security approaches are patchy, there are too few employees with the necessary digital skills and data is not being collected and managed in a way that would best empower organisations.”

The mining industry has a history of moving slowly when it comes to the adoption of radical ideas and that has slowed the impact and benefits traditionally associated with the IoT and technology in general.

Is this attitude, however, starting to change? Inmarsat suggests that the industry-wide adoption of IoT technologies is accelerating, and in Europe the X-Mine project, led by the VTT Technical Research Centre of Finland, is a good example of how the mining industry is using new technologies to create a more independent, self-sufficient, but also more ecological mining industry.

The project has already resulted in new technologies that have helped to lower energy consumption and lower emissions, as well as significantly lower water consumption.

In another project, called Goldeneye and funded by the European Union, a platform that combines earth observation technologies with on-site sensing and which will use remote sensing and positioning technologies with data analytics and machine-learning algorithms is being developed to allow satellites, drones and in-situ sensors to collect high-resolution data of an entire mine, which can then be processed and converted into actionable intelligence to allow more efficient exploration, extraction and closure.

“Our goal is to bring together different technologies in a platform that can offer innovative solutions and have a positive effect on the mining industry as a whole,” says the project coordinator Marko Paavola from VTT.

The project will also look to improve the analysis of a site’s mineralogy using drone integrated geophysical sensors as well as proximity sensors including active hyper-spectral sensing and time resolved Raman spectroscopy.

The applications developed in the project, as with many others, will be adopted by a mining industry that is under pressure to reimagine business models and to start to incorporate technology into future operations.

The motivations for adopting the IoT are varied but key are driving efficiency, increasing staff productivity, improving health and safety and reducing the environmental impact of mining.

In its report Inmarsat found that when it comes to the IoT many of the projects being adopted are associated with data usage and are, essentially, simplistic with the focus primarily being on issues of health and safety.

This is expected to change, with a greater focus on vehicle telemetry, supply chain tracking, and automated vehicle haulage predicted.

Driverless technology, for example, is forecast to increase mining output by up to 20 per cent while cutting fuel and maintenance costs.

Wenco International Mining Systems and Oxbotica, the autonomous vehicles specialist, have joined forces and are developing an Open Autonomy solution for mining, with trials currently underway.

The system is intended to enable efficient autonomous mining deployment, allowing mines to operate using any open standard-based vehicle allowing them to integrate it into an existing fleet.

Both companies have emphasised the importance developing an open and interoperable ecosystem of partners as it will enable a broader range of operators to integrate solutions alongside existing mine infrastructure. As a result, mining companies will not end up being locked in with a specific vendor, and will be able to carry on using their preferred technologies, independent of their primary industrial systems.

“Wenco and Oxbotica believe in the principle of open systems and consider it the primary way to bring about our joint goals of widespread adoption of autonomous technology and safer, more productive industrial operations. Our joint platform will allow customers to choose any open standards-based vehicle and integrate it into their existing operations,” says Ozgur Tohumcu, CEO of Oxbotica.

“The mining industry has proven to be at the forefront of deploying early generation autonomy systems because the business case has been clear for operators,” said Tohumcu. “However, less than two per cent of vehicles are autonomous in mines around the world.”

Business specialists, BDO, believe that mining companies will need to become “Lean, Green, Digital” machines if they want to survive and prosper.

In research conducted by BDO, the mining industry was found likely to use robots and it was estimated that they will replace more than 50 per cent of miners, while reducing mining accidents by as much as 75 per cent.

Robotics may pose a risk to mining jobs but BDO expects that the majority of miners will be retained, and retrained to run the technology controlling the robots.

As for global mining companies leveraging Internet-connected sensors and automated drillers in mines, BDO expects that their deployment will result in a 30 per cent fall in per ton digging costs.

While the IoT can be used to help improve mining safety, more Internet-connectivity will open up the industry to cyber-security breaches and new cyber-attack vectors will require it to plan for and prepare to counter these through the operation of proper internal controls. With the rise of renewables, BDO makes the point that activist hackers will be expected to launch a growing number of cyber-attacks on mines using Permanent Denial of Service attacks to eliminate the environmental and social threats they see such operations posing and will, most likely, use workers’ connected devices to initiate those attacks.

The benefits for the industry from technology are great but so too are the risks and too many mining companies still see cyber-security as a cost, while too few have the necessary skills to implement effective cyber-security policies.

Reliable connectivity is critical when it comes to the IoT and is a challenge when operating in environments that are remote, harsh and spread over great distances – but without it, IoT projects will fail.

The solution has been designed to provide real-time data transfer and PTT communications which are critical for mining engineers performing well-head maintenance, or mining exploration teams looking for new mineral deposits. This kind of work requires everyone involved to be able to see the position of assets, share data and communicate in real-time.

Inmarsat’s and Cobham’s solution looks to address this and is said to offer reliability of more than 99% uptime. Low form factor satellite terminals, such as the Cobham EXPLORER 323, can be mounted on vehicles and are able to provide real-time GPS, telemetry and PTT capabilities, through the EXPLORER Mobile Gateway. This means control centres can efficiently and safely monitor the movement and performance of their vehicles, while enabling communications with crew wherever they are located. 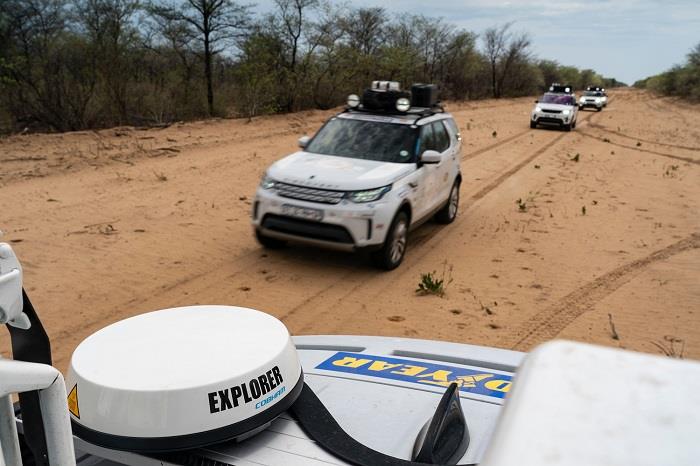 Critically, the solution can be integrated with existing kit on board, allowing organisations to keep and use existing equipment.

PRISM PTT+, a service powered by Cobham SATCOM’s PRISM (Private Routing & Intelligent System Management) technology, enables the BGAN PTT Solution to switch between connectivity types such as UHF or VHF, 3G/4G and satellite making the solution cost-effective and easy to use.

The switching process is said to be unique because it is completely seamless and offers an economical approach to voice communications.

As Tara Maclachlan, Vice President of IoT, Enterprise at Inmarsat, explains, “Inmarsat’s BGAN push-to-talk solution is set to offer a new level of resilient communications for organisations working in remote regions. It provides visibility of the movements and performance of remote assets along with real-time communications ensuring organisations benefit from enhanced efficiencies and safety levels.”

Critically, a growing number of companies are not just looking at connectivity but how they’re connecting their assets and people and there is now growing deployment of edge connectivity solutions to reduce costs, and improve data transfer rates.

The optimisation, filtering and routing of data will be critical and the use of edge computing will have a crucial role to play as companies look to turn data driven insights into practical actions – but at present, according to Inmarsat’s report, too many companies are struggling with poor analysis which could undermine the credibility of their IoT projects.

While the mining industry is focused on raising efficiency it also has to contend with safety and the need for proper training which can be time consuming and dangerous.

Anglo needs its crews to mark off blasting patterns accurately, drill straight and time explosives in the correct sequence, so that the blast will advance deeper, straighter, and crucially, more accurately, while at the same time ensuring that crews are safe.

Mining is expensive and with hundreds of blasts scheduled every day any mistakes are costly. 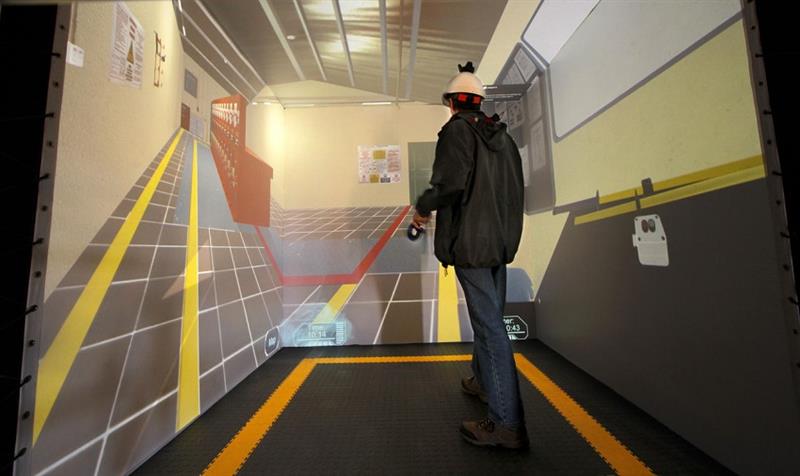 Using motion capture technology developed by US company, Vicon, it has been possible to develop training sessions that create a lifelike “game” for both trainees and teams helping them to adapt to harsh conditions.

Simulations are provided through a powerful PC that drives 12 digital projectors and another for the 20 state-of-the-art Vicon motion capture cameras.

Anglo trains 1,500 people per year and providing effective blast training is difficult on multiple fronts. Not only is it a challenge for trainees

underground in an environment that is dark, dusty and damp but communicating decades of practical experience and giving trainees a proper grasp of things like the scale, distances and measurements of a blast face is extremely difficult in a classroom setting.

The simulation has been designed to show trainees what could happen should they make the wrong decision and delivers a loud bang and sudden darkness to simulate a potential rock fall on the spot where they are standing.

“Make no mistake, this gives the miners a real fright. They’ll remember their error. Since you are fully immersed in the virtual mine, there’s no room for distraction and the learning sticks. When you detonate the blast, the rock flies – creating a very vivid, a very memorable experience,” says Johan Bouwer, STS3D project lead.

The range of projects being undertaken within the mining industry is immense and, encouragingly, a growing number of companies are reporting that technology investments are making a positive impact on their bottom line.

Increased investment in technology will see a mining industry that will not only benefit from significant cost savings but one that will become markedly more efficient.

Shaping the future of autonomous mobility

The future of research

The future of UK technology