Expanding the capabilities of MMW technology is helping to provide insight into the mechanics of viral transfer, offering potential treatments for COVID-19 and similar viruses, as New Electronics discovers

The next breakthrough in the fight against deadly viral outbreaks may be just a higher frequency away. While millimeter wave (MMW) devices are more commonly associated with military applications, remote sensing, security screening and next generation telecommunications, there is an even more pressing need for this technology - breaking down barriers in research in order to gain new insight into the mechanics of viral transfer.

Curt Dunnam, Director of Operations for the ACERT National Biomedical Center at Cornell University, works with a research team looking to perfect biomedical research devices that operate at the higher end of the MMW spectrum.

Initially limited by the physics of waveguide technology, the research team has used advanced componentry and quasi-optical techniques that can now enlist mmWave technology in the search for viral treatments.

ACERT’s investigation into constituents of the coronavirus is part of a collaboration with other university teams that has been deemed critical to the coronavirus research effort. So much so that even though the main Cornell campus - located in Ithaca, New York - was forced to completely shut down nonessential services for a number of months, the ACERT centre remained operational so that the team could advance their research throughout the current pandemic.

This wouldn’t be the first time that EM-driven magnetic resonance has come to the rescue of biomedical science. Thanks to nuclear spin resonance technology, NMR and MRI devices have long been the gold standard for determining molecular structure and diagnosing soft tissue abnormalities such as tumours.

Similar, but more advanced, microwave base electron-spin-resonance (ESR) technology now promises to enable medical researches to identify a chink in the coronavirus armour.

“The spike protein, specifically the fusion peptide, allows these viruses to infect cells by transferring their genome,” explained Daniel. “Blocking the fusion step is significant because the fusion machinery doesn’t evolve and change as fast as other parts of the protein do. So, if you can develop antiviral strategies to reduce that efficiency, you could have potentially very broadly-acting treatments.”

Daniel points out that the virus’ activities can be difficult to parse through traditional approaches because the fusion process is dynamic and flexible, and the spike protein changes its shape drastically during fusion. Therefore, they needed a means to study this microscopic process in vitro.

“We have unique facilities for doing such confirmation dynamics of proteins,” explained Dunnam. “We send out very short, well defined pulses, but at mmWave wavelengths. The induced electron spin resonance signals exhibit an intrinsically high SNR and bandwidth, resulting in several orders of magnitude improvement in speed and resolution over NMR methods.”

Virginia Diodes (VDI) built the world’s highest power solid-state coherent 240GHz source that puts out 500 milliwatts (a record at this frequency) for Cornell’s ACERT centre. Based in Virginia, VDI is a manufacturer of state-of-the-art test and measurement equipment.

“Increased power enables a very short pulse that provides increased spectral coverage of the sample,” added Dunnam. “However, at half-a-watt we can’t afford to give up anything through insertion loss, hence we require an extremely efficient isolator.”

Faraday rotation isolators – ‘isolators’ for short – allow electromagnetic signals to pass in the forward direction with minimal attenuation, but with maximum absorption in the opposite direction. However, standard isolators fall short at extreme GHz frequencies. Above the WR-5.1 band (140-220 GHz) loss can climb to more than 5 dB, making obtaining the lowest possible insertion loss a very formidable engineering challenge. 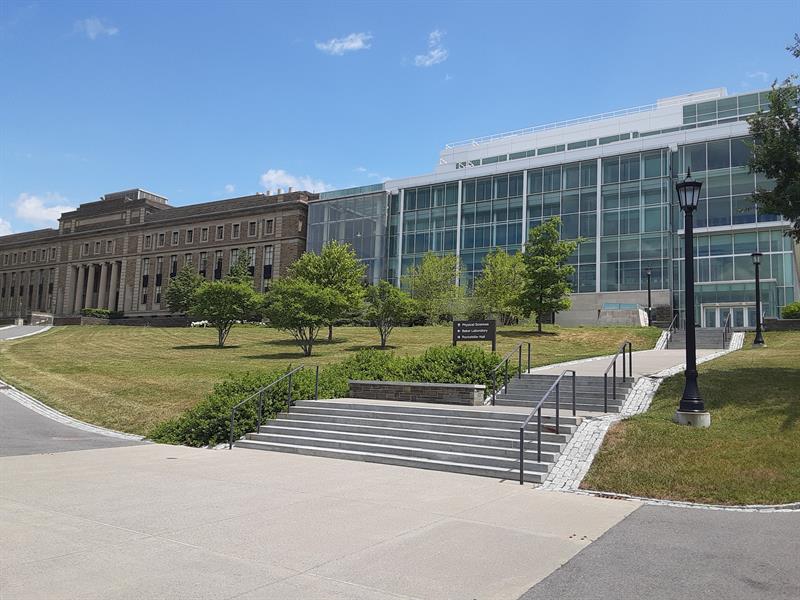 Expanding the limits of MMW R&D

For Cornell’s ACERT application, reducing forward attenuation as much as possible was particularly crucial because at 500 milliwatts, while still high for a coherent solid-state source, any loss can significantly diminish the spectrometer effectiveness.

“Virginia Diodes referred me to Micro Harmonics,” recalled Dunnam. “I was surprised to find there was a company producing a component that not only operates at such a high frequency, but was an ideal fit for the proposed ACERT instrumentation. They had an isolator with the single most important parameter I needed, low insertion loss. They were ultimately able to select one with just 1.2 dB losses at 240 GHz, which is pretty phenomenal.”

Micro Harmonics designs solutions for components used in MMW products. Under a two-phased NASA contract, the company successfully developed an advanced line of isolators for WR-15 through WR-3.4 (50 GHz to 330 GHz) applications.

“They fully characterise each individual isolator, which is really important since each one is hand-assembled, meaning there are slight variations in performance,” explained Dunnam. “This allowed selection of the device that displayed good performance in the narrow frequency range I was interested in, 239-241 GHz.”

Minimising insertion loss to as low as l.2 dB is achieved by reducing the length of an internal ferrite rod to the shortest possible length. The design developed for NASA saturates the ferrite with an unusually strong magnetic bias field, which enables the incident signal to rotate the required 45 degrees in the shortened ferrite rod.

Dunnam went on to point out other engineering challenges faced at such high frequencies. The relatively increased power enables a very short pulse that provides increased spectral coverage of the protein sample. But after the last transmitted pulse in this application, full receiver sensitivity to the reflected decaying electron spin signal is required within 10 nanoseconds.

“Any kind of ringing in the system that is due to reflections can increase ‘dead time’ and obscure results, so all the impedance mismatches and spurious signals in the system must be less than 0.1%,” said Dunnam. “Additionally, the solid-state source multiplier conversion efficiency and stability can be adversely impacted by out-of-phase signals being reflected back. Low port reflection in the isolator helps keep all that in check.”

“The solid-state source could be destroyed by too much reflected energy,” explained Dunnam. “As the source was expensive to develop and fabricate, I want to protect that investment.”

Lastly, the issue of heat absorption needed to be addressed even at sub-watt transmitter power levels. Power in the reverse signal is absorbed within the isolator, resulting in heat. Historically, high heat was not an issue as there was very little power available from solid-state sources at MMW frequencies, but as Dunnam pointed out, 500 milliwatts at 240 GHz is, relatively, a lot.

In his research centre’s application of studying viral proteins, wavelengths are short and components are necessarily small and fragile.

To overcome the problem of high heat loads, the Micro Harmonics isolators selected by Dunnam incorporate diamond heat sinks into their design. Diamond is the ultimate thermal conductor, approaching 2200 W/m•K (watts per meter-Kelvin), more than five times higher than copper. Diamond effectively channels heat from the resistive layer in the isolator to the metal waveguide block, and thus lowers operating temperatures for improved reliability.

By pushing the limits of mmWave technology, engineers are laying the groundwork for the next wave of medical advancement that will help fight against future outbreaks and pandemics.

“What’s exciting about our work is we’re providing insight into how all this machinery works, which is essential for the development of new antivirals.” summed up Daniel.

Leading the fight against cybercrime

Capitalising on the mmWave spectrum

Outlook 2016: Advanced FPGAS make up the heart of a layered technology approach ensuring the highest protection against cyber threats