Interference on the move

When Daimler set about creating a test chamber for electromagnetic compatibility (EMC) it wanted an artificial environment that would reflect the conditions its vehicle would meet on the roads of the future.

The result, opened over the summer, is a set of metal-lined chambers with floors designed to behave like asphalt and that have the space to build highly realistic tests of high-frequency RF communications.

One chamber at the Sindelfingen R&D centre in southern Germany, intended for measuring the performance of RF antennas, is three storeys high.

An unusual element of the Daimler design is its use of a reverberation chamber for conducting interference immunity tests. The chamber has three large rotating metal spirals that can spin at up to 120 revolutions. These stirrers redistribute the electromagnetic waves around the chambers much more efficiently than using traditional techniques using bombardment from an array of antennas spread around the room in sequence.

The Daimler test centre is a response to the way in which electromagnetic environment both around and within the vehicle is becoming more complex and critical to the vehicle’s safe operation.

Systems inside the vehicles will have to cope with EMI from the outside world generated by other vehicles and the roadside infrastructure as they begin to exploit the information that can be supplied over wireless vehicle to vehicle (V2V) and vehicle to everything (V2X) networks. The cars will also generate a lot of their own EMI that can have adverse effects on the operation of sensor modules and ECUs.

Although today’s vehicles have plenty of interference generators, they tend to operate at the lower end of the spectrum. This is likely to change and possibly change quickly.

The non-isolated DC/DC converter is a mainstay in automotive designers and a common source of EMI within the vehicle. Now, the currents employed by DC/DC converters and their switching rates are set to increase dramatically. Power transistors built using gallium nitride or silicon carbide can switch efficiently more than a hundred times faster than their conventional silicon counterparts. Designers seem likely to exploit those technologies to keep power converter size down and to benefit from the way in which they can run at higher temperatures, which will let them use smaller heatsinks and enclosures. Researchers have shown switching frequencies well into the megahertz range for GaN power circuits that can be exploited for greater efficiency.

As current is a major factor in generating EMI, such power converters are potentially troublesome sources. Designers will need to keep the high-frequency current loops in their circuit boards as small as possible – though the reduced size of filtering passives and the power transistors themselves may help contain the problem. 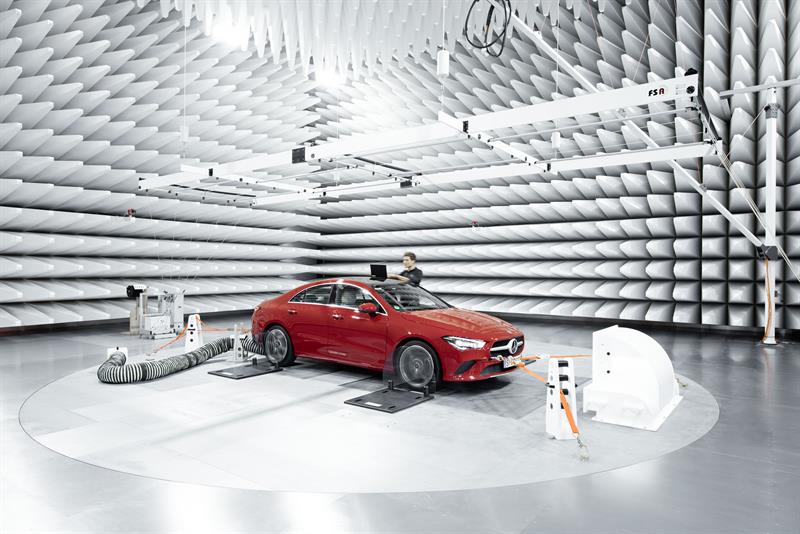 Above: EMC chambers with multi-receiver technology makes it possible to take measurements at all antennas simultaneously

Flexible PCBs
Other systems within the vehicle do not have to cope with such high currents but they are potentially more troublesome to debug in an environment where RF protocols such as Wi-Fi and 5G are not just used for infotainment systems but become fundamental components of the drive controls.

Within the bodywork, automakers are now looking beyond basic Ethernet to versions that run at 1Gb/s and even 10Gb/s.
There are also changes in the way that systems are wired together. Rather than stick with a conventional and often heavy wiring harness made up of many multicored cables, PCB makers such as Trackwise expect vehicle designers to begin to make more use of flexible PCBs – already common in instrument clusters.

A study by Loughborough University argued flexible PCBs are potentially good candidates for replacing much of the wire harness needed for the electronics in door panels.

The study’s EMC measurements found performance was largely worse than twisted-pair wiring below 1MHz, the flexible PCB won at higher frequencies. Braiding the traces in a similar fashion to twisting in a wire proved to be effective at reducing EMI.

For high-speed automotive networks, one option to limit the EMI produced by network interfaces is to move to fibre-optic cabling, using plastic rather than glass. This is an option favoured by suppliers such as Spain-based KDPOF, which has been working on large-core fibres that work with 1Gb/s signals. Molex, on the other hand, still favours electrical connectivity and sees 10Gb/s as entirely practical.

Mike Gardner, director of advanced technology development in transportation and industrial applications at Molex, says: “Molex is a strong advocate for the use of copper in automotive for high-speed Ethernet links as the copper technologies are widely accepted and within the reach of advancing toward faster speeds. Differential systems will allow more EMI margin over that of coax in our view at some point.

“Shielding of both cables and connectors are well understood in other industries and can be leveraged in future designs of those products. What is also leveraged is the understanding from other industries of how to manage the PCB designs and enclosures to optimise for EMI that are now becoming a greater part of automotive ECU development practices,” Gardner adds, noting that fibre may ultimately start to replace copper but that replacement will depend on greater advantages being identified for the optical rather than electrical approach to in-car communication beyond existing deployments of MOST on plastic fibre.

EDA companies see greater use not just of testing but of pre-manufacturing simulation to assess the performance of high-speed automotive protocols and ECUs. It has helped lead to a process of acquisition and consolidation in design.

Vic Kulkarni, vice president and chief strategist at Ansys, says his company’s decision to buy electromagnetic simulation tools provider Helic was the spread of gigahertz-plus designs across the electronics industry, which make post-silicon and post-PCB tuning much harder to achieve successfully. “The turning point is around 2GHz.”

Tom Beckley, general manager of the custom IC and PCB group at Cadence Design Systems, says EM is a major part of the company’s move into multiphysics simulation: the same ground as that occupied by players such as Ansys and Siemens.

The complex packaging needed for a camera mounted against a windshield provides an example for him to describe the problems. “We have electronics in a small housing. We have to worry about thermal effects: how it will react as the sun beats down on it year after year.

You have to be smart as to how you integrate the design. To get the heat off the vision IC you might put a heatsink on it, but that changes the RF interference profile. If you drill holes in the enclosure, how will that affect RF behaviour?” Beckley asks.

The result, Beckley argues is much greater use of simulation to test different scenarios to work out how susceptibility and propagation changes with different thermal and electrical configurations work, long before they are integrated into a vehicle ready for a testing chamber like Daimler’s.

ALD technology develops to support the move to 3D devices

A move to brushless DC motors

US Senate votes to move ahead on chip bill

Academics turn on Cambridge paper, but shouldn’t they collaborate to move the science forward?