All of those involved left with investment ready, disruptive and commercially focused applications, but while immersive technologies are helping to unlock new business models and are seeing increased investment it’s still a sector that’s struggling to deliver a significant commercial breakthrough.

Whether it’s supporting research and innovation, building on strong research systems and encouraging greater collaboration, or working with educational providers to develop the skills and training programmes to support the sector, there are still plenty of barriers to the technology’s adoption and commercialisation.

According to Jessica Driscoll, Head of Immersive Technology at the Digital Catapult, the UK’s advanced digital technology innovation centre, “While this year’s Augmentor programme saw some amazing start-ups take part, and the quality of the products and ideas were outstanding, it remains difficult to spot significant trends.

“The programme is a very broad-based. We saw products intended to help luxury retail brands to survive the epidemic, a platform to visualise data in new ways as well as pioneering new kinds of shared audio experiences.

“The value of the programme for those that took part comes from being able to meet other companies, to directly engage with investors, to talk through problems with experts and have access to the Catapult’s immersive laboratory, as well as using the Demo Showcase that’s held at the end of the programme to pitch their ideas to interested companies, investors and the like.”

Last year’s Augmentor programme had to be delivered entirely online with workshops, mentoring and networking sessions all done virtually.

“Despite those challenges we brought on board 24 partners, 41 mentors and 19 community partners to help accelerate growth and investment, and we were able to pull together over 160 interested parties for the Demo Showcase including some of the world’s leading investment funds such as HTC Vive, Remagine Ventures, MMC Ventures and Ascension Ventures.”

According to Driscoll, the cohort comprised of more late stage companies. “Quite a few were further along in terms of raising funds than is usually the case, and I think we’ll need to structure future programmes slightly differently to better help companies that are further along in funding and nearer to commercialisation.

“In the UK we have a very complex funding landscape and we need to look at how we fund start-ups. Perhaps, we need to move away from competition-based funding and focus more on developing a better grant model, which isn’t restricted to a specific time period or to a competition.”

The Digital Catapult was set up to drive the early adoption of technologies and looks de-risk innovation through uncovering new commercial applications for technologies like immersive, future networks, distributed ledger and artificial intelligence, but Driscoll believes that the UK is still playing catch-up with the likes of the US and Germany.

“We certainly don’t see the same level of funding and while the government has pledged to raise R&D spending there remains a lack of detailed planning, which can be frustrating.”

Driscoll makes the point that a lot of work still remains to be done in encouraging greater collaboration between start-ups and more established businesses, and suggested there should be greater focus on cross-tech applications and called for a move towards what she described as more ‘technology fusion’.

“The UK immersive industry is still struggling to reach commercial scale and while many small companies have created a startling mix of really impressive and innovative applications, few have been able to scale their operations,” she said.

“The perception of the immersive industry is another issue,” Driscoll conceded. “It’s up against 5G, AI and the Internet of Things, which are far larger markets that have scaled more effectively. Not only are there plenty of tech start-ups working in these spaces but significant government funding is available.

“The immersive industry, here in the UK, lacks a large home-grown champion so there’s certainly an issue when it comes to raising the sector’s profile.”

According to Driscoll it’s hard to break out of the niche view many hold of the sector – there’s been limited research into headset use, which has made it harder to build a business case while, “anyone can use a mobile handset.”

“We need to embrace more innovative business models going forward, perhaps using a licensing model, but the opportunities, and the ideas, are there.”

Among the companies that took part in what was the fourth edition of the Augmentor programme were Manchester-based Evidential. It has produced EVITA, a major incident VR training platform that has been designed to equip police officers with essential soft and hard skills. 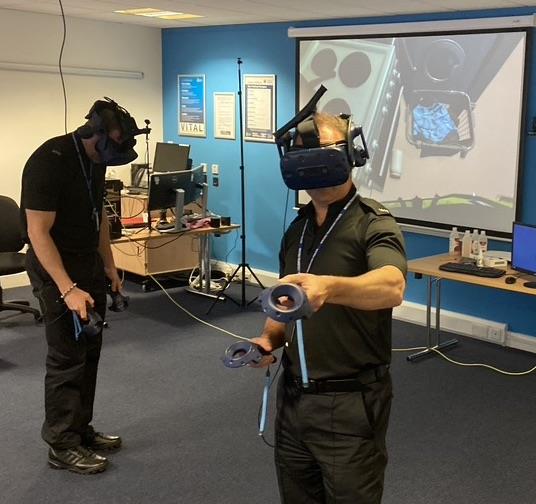 Having already received backing from Innovate UK it has also developed another product, Golden Hour that uses AR to improve the preservation of crime scenes.

Another, Emperia, has developed a platform to boost sales and customer engagement for businesses in art and luxury fashion and has created a variety of virtual reality experiences that help to improve the way that products can be seen online in 3D - it’s currently working with more than 25 clients, including Maddox Gallery and Skarstedt, to bring different physical experiences into the virtual world.

Based in Sheffield Slated Theory has created a platform that visualises data and has developed a cloud based 3D data visualisation tool called “Alaira” that uses XR and immersive analytics to bring people together to analyse multiple data sets in real time, with the aim of driving faster decision making within organisations.

Another is MOONHUB, which is looking to disrupt traditional training models through the use of a high quality, immersive training platform which uses VR to convert e-learning solutions into interactive training scenarios to improve employee engagement. 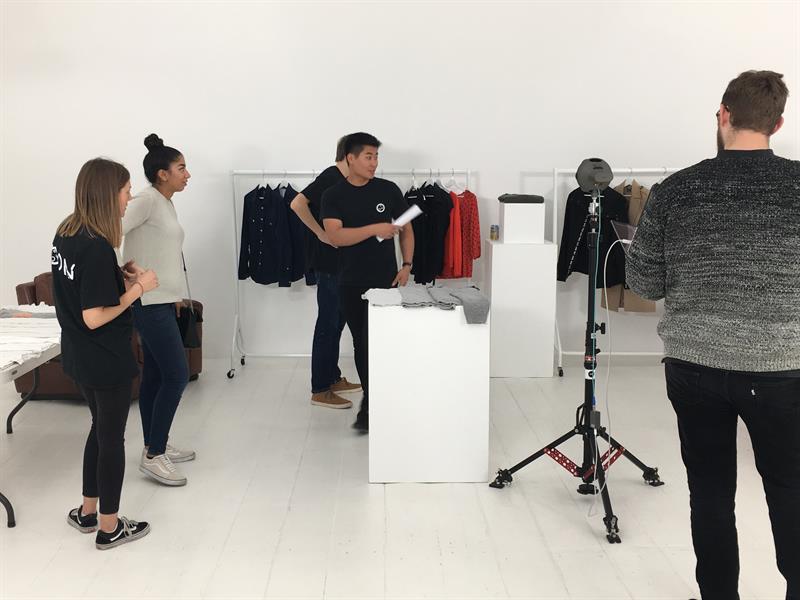 According to CEO and founder, Dami Hastrup, “We use deployable VR to enable our clients to provide immersive and interactive training using their own learning and development content. It’s both intuitive and easy to use and our aim is to make the use of VR as easy as using a tablet is today.

“When we set the business up we saw a glaring gap in the market for a unified platform capable of deliver training and we thought a VR platform was a great tool for providing more information and data, enabling clients to get more out of their training content.”

Turning to the Augmentor programme Hastrup said that their decision to get involved was because, “we wanted to surround ourselves with like-minded businesses – immersive start-ups facing the kinds of problems that, perhaps, other new businesses wouldn’t necessarily face. Having a cohort of likeminded companies was really important to us and the programme helped to raise awareness of the business among both potential investors and clients.”

Hastrup said that the industry has had to contend with reputational issues from previous waves of failed VR projects.

“The technology has come a long way since then and we’re now deploying platforms and presenting solutions that are live, scalable and easy to use – but it’s an innovative and new technology and you need to educate users.”

Laura Smith, co-founder at Slated Theory, a VR/AR company from Sheffield would agree with that. The start-up’s platform has been designed to enable people to enter their company data and visualise it in new, innovative 3D ways.

“It’s about enabling businesses to visualise their data in an immersive, manipulable and scalable 3D environment, making it easier for them to analyse and explore their data,” Smith explained. “It’s possible for a number of people to look at far more data at the same time, to then drill down into that data and better understand it and discover trends.” 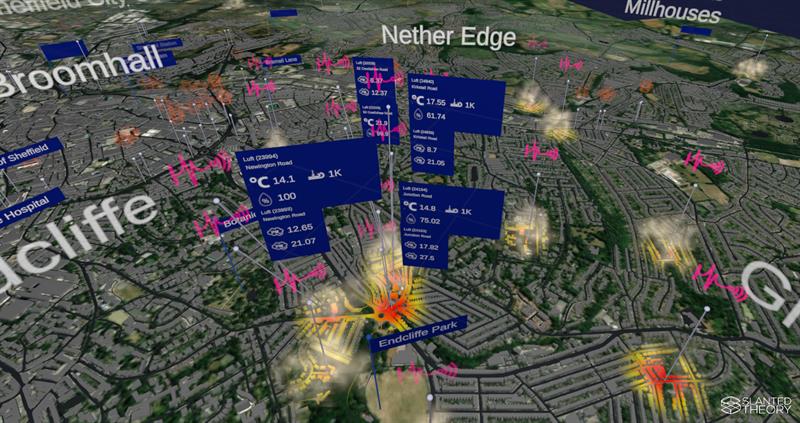 Above: Slanted Theory has created a platform that visualises data

According to Smith the business was set up in response to the amount of data companies and projects were generating and the need, as they saw it, to give people the ability to explore data more effectively.

“One of the biggest issues that we found was effective communication and the sharing of large scale and complex data among different stakeholders, so we wanted to provide an easy to use platform. VR lends itself to the exploration of both historical and real-time data,” said Smith, “and if you can bring different data sets into one place you can use visualisations to better understand what’s actually going on and address problems and situations more effectively.”

For Smith the Augmentor programme provided an opportunity to better understand how to engage with investors.

“It was a chance to see how investors responded to the technology,” Smith said. “While immersive technology isn’t new, data visualisation within immersive tech is still relatively young and requires a certain mind-shift as to how data can be represented in a 3D environment. Those who ‘got’ what we were doing were certainly excited by the platform and how data could be analysed.”

Unlike some of the other companies in the programme Evidential, which specialises in the use of the Electronic Presentation of Evidence in the criminal justice system has already received significant funding from Innovate and is working with a number of police services in the UK.

“As an expert witness company we use technology to explain complex evidence to juries,” explained the company’s owner, Sean Murphy.

“We’ve already been involved with a number of high profile cases since we were established in 2014 – Dr Harold Shipman and the Hillsborough trial - and we’re using immersive technology to recreate crime scenes in 3D, developing animations and using graphics to take a jury through a crime scene.”

“We can provide significant costs savings especially when it comes to high cost crime cases, but this technology also has a role in volume crime. It’s about taking large amounts of complex data and evidence and then presenting it in a more understandable format.”

Evidential already has a contract with the Crown Prosecution Service (CPS) and has worked on cases for the Criminal Court in The Hague and the United Nations.

“We’ve been using technology over many years – 3D printers to demonstrate injuries, for example - and started to use VR to recreate crime scenes enabling users to explore evidence and get a better spatial understanding of a crime scene.”

This technology was initially designed for use in court but Murphy soon realised that there was a strong need, and a good business case, for its use in police training.

“That resulted in the creation of EVITA our VR training platform and we’ve had significant interest from police services across the UK. Not only can we create different scenarios for training but can measure training outcomes.”

According to Murphy the company’s involvement with the Augmentor programme was less about finding investors – grants from Innovate and the government and the commercialisation of its EVITA programme meant that was of less interest.

“For us it was about the mentoring that was available and learning how to build a brand.”

Whether it’s training, data management or simplifying the presentation of evidence in court the variety of applications for immersive technology are immense.

More data is certainly needed to encourage investors and while investment is happening it still tends to be skewed towards gaming.

There’s still a significant job to do in educating people and in developing solid business models, let alone ensuring that we have an infrastructure that’s fit for purpose in supporting and enabling this type of technology, but it does look like that we are getting there – slowly, but surely.