We are entering a new era of motor technology, with many of the 10billion electric motors sold each year in line for an upgrade. Innovation in motor control algorithms and the lowering cost of embedded microcontrollers are prompting a new generation of brushless DC (BLDM) and permanent magnet synchronous (PMSM) motors. At the heart of these new motors is an integrated motor controller integrated circuit, containing a 32bit processor core, as well as revamped configurable analogue and power management circuitry. Sophisticated motor control algorithms – such as field oriented control (FOC) – running on the processor core remove the need for external sensors, thereby reducing overall system component count.

Do we need to fix it?

The transition from old motor control designs to this new era of processor controlled motors brings with it a range of benefits. Handheld tools, such as power drills, can be smaller and deliver higher torque, fridges can have higher energy efficiency and industrial machine movements can be more precise and detect abnormal forces to ensure operator safety.

Meanwhile, high performance motor control software enables fine control of rotor spin. Current to the motor is controlled by software, ensuring that only the necessary amount of electricity is used. This makes the motors more energy efficient than was possible with previous control technologies.

The transition from older electric motor technologies – such as brushed DC and inductive AC motors – to BLDMs and PMSMs has faced headwinds. Despite being less energy efficient and having lower performance, older motor technologies comprise the majority of spinning motors today for a number of reasons. As well as the natural inertia of equipment manufacturers adopting new technology, older electric motors enjoy well amortised manufacturing costs. On top of this, the introduction of new technology – and in particular technology demanding embedded software – demands significant expenditure on research and development. For industries where profit margins on the end product are traditionally low, this can be difficult to justify.

One of the biggest forces driving change is the energy efficiency demands on suppliers of high-voltage electric motor equipment. Typical motor efficiency – measured as a ratio between output mechanical power over input electrical power – ranges from 70 to 95%, with newer generation motors at the higher end. Improving efficiency by 10% can lead to annual savings of more than $1000 for a 20HP motor running continuously (assuming 15kW per hour consumption at a cost of .1/kWh).

Due to the sheer number of motors deployed across the world, OEMs are increasingly asking their motor suppliers for more energy-efficient designs, and this is driving the transition towards new motor control technology. In recognising this need for energy savings, government agencies have started to mandate energy saving targets for electric motors, especially those with higher power ratings.

Designers of new generation motors face a number of problems, including form factor constraints, real time processor requirements and restrictions enforced by the Bill of Materials (BoM) cost envelope. With a powerful 32bit Cortex-M0 processor (see fig 1) at the centre of a full featured mixed signal integrated motor controller, these design problems can be eliminated, allowing designers to focus their efforts on other differentiating factors. 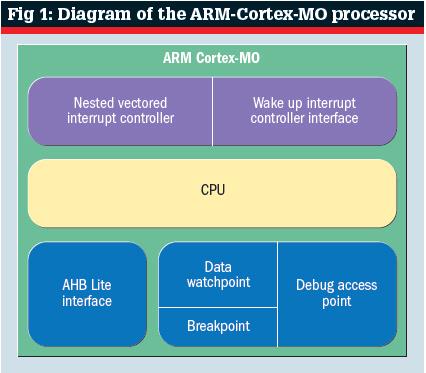 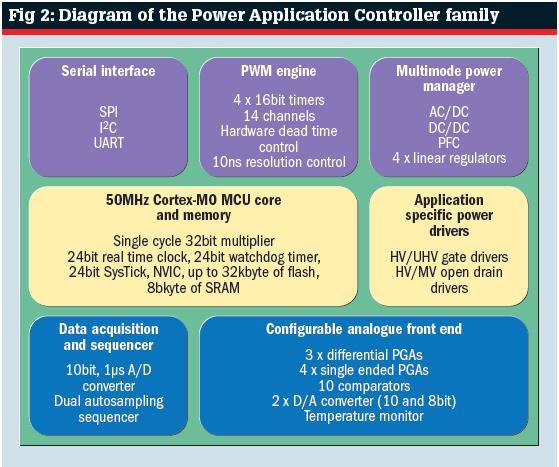 The Cortex-M0 core on the PAC IC is augmented by multi mode power management (MMPM), a configurable analogue front end (CAFE), data converters, autosampling sequencers and a 100MHz PWM engine. The MMPM enables PAC ICs to manage both AC input power (in an AC/DC flyback configuration) or DC input up to 72V (in buck or boost modes), thereby reducing the need for additional external mode switching components. In addition, four on board low dropout regulators (LDO) inside the MMPM offer system power rails, which eliminate the need for an external system power manager.

Reliability and safety are two other important aspects in motor control design. Automatic software fault detection on the Cortex-M0 enables a number of error conditions to be detected and handled, adding to system reliability. On safety, the CAFE block enables programmable gain amplifiers (PGAs) to detect system faults, which could be caused by abnormal current condition through a motor phase. The CAFE block would respond by shutting down high-voltage gate drivers, interrupting the Cortex-M0 processor and enabling further software action to be taken.

Having this level of processing power inside a single integrated circuit promises to enable higher performance motor designs that are quieter, more precise and more energy efficient.

The programmable 32bit processor also opens up new product form factors that were, until now, impractical due to the need for sensors required by traditional DC brushed motors.

FOC algorithms running on the Cortex-M0 estimate motor position based on electro-magnetic field waveforms, doing away with the need for external motor position sensors altogether. Applications that require the use of FOC are likely to find that features in a PAC IC family offer the right balance between cost and programmability.

Whilst the user benefits offered by the inclusion of newer, more efficient software controlled techniques inside single IC motor controllers are compelling enough, compliance to government mandates for higher energy efficiency will be a key factor in driving this transition. As consumers become more accustomed to higher performing, more energy efficient and safer home tool and equipment, further demand will accelerate the transition of older to newer motor controllers by electric motor manufacturers.

Motor protection breakers as a form of effective drive protection

The future's bright: How the led could enable a range of new applications