When WiFi 6 (IEEE 802.11ax) was introduced by the Wi-Fi Alliance, the standard was initially designed to operate within the licensed exempt bands between 1-6 GHz.

Then, in April this year, the Federal Communications Commission (FCC) announced it was adopting rules to open the 6 GHz band (5.925–7.125 GHz) for unlicensed use for Wi-Fi 6 as well.

The highly anticipated move further boosts the expectations for increased speed well beyond the 30-40% already estimated compared to the previous IEEE 802.11ac standard. A significant boost in bandwidth is expected as well.

Yet, despite the emphasis on these benefits, one of Wi-Fi’s most enduring problems has been latency issues, the delays in time required to transmit and receive large amounts of information wirelessly.

Although many applications are relatively unaffected, latency-sensitive applications include augmented/virtual reality, public access points with large numbers of users and high definition video feeds. So, with Wi-Fi 6 promising a reduction in latency of approximately 75%, many product developers are understandably excited.

However, the expansion of the available frequencies for the new Wi-Fi 6 standard – referred to as Wi-Fi 6E – is only part of the puzzle when it comes to reducing latency. The Wi-Fi 6 and now 6E-enabled devices that connect to these networks must also be designed with cutting edge RF components that minimize latency to levels previously considered unachievable.

"Latency is still an issue for certain applications,” explains Manuel Carmona of Johanson Technology, a specialist in high frequency ceramic components. “For example, there is a 300-400 millisecond latency [with IEEE 80211.ac] for online videoconferencing. That makes it difficult to, say, jam live with your bandmates. Wi-Fi 6 and 6E, combined with extremely low latency RF components will resolve a lot of these issues.”

Among the most critical components for any RF wireless device are the bandpass filters that keep the signal within the assigned frequencies outlined by the FCC. To meet these new requirements and stay within the specified frequencies, Wi-Fi RF chipsets are required that can deliver the proper filtering for optimum FCC/ETSI compliance in a small footprint.

However, this can be a challenge given the proximity of the original Wi-Fi 6 frequencies to those of the 802.11ac and with Wi-Fi 6E to ultra-wideband among other active bands within the vicinity of the spectrum.

“It is a challenge to design a sharp enough bandpass filter to reject the unwanted frequencies right next to those you want to pass through,” explains Carmona. “To do that, you need a really sharp skirt so the filter is more selective. Usually, that requires more expensive technologies like SAW [surface-acoustic-wave], BAW [bulk-acoustic-wave] or FBAR [thin-film bulk acoustic resonator].”

Fortunately, there are passive surface-mounted bandpass filters now being developed by RF component manufacturers to meet the new Wi-Fi 6E standard that are cost-effective, have low insertion loss, available in much smaller footprints, and do not draw power from the battery. 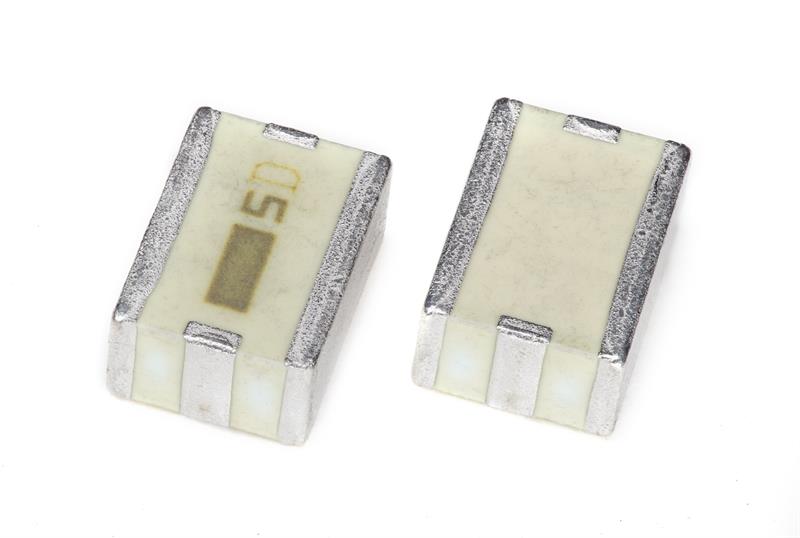 Johanson Technology, as an example, has recently released a ceramic SMT Bandpass Filter (p/n: 6530BP44A1190), which has a passband of 5925-7125 MHz while rejecting other interfering bands.

The SMT Bandpass Filter is packaged in a monolithic, cost-effective device called an IPC, or Integrated Passive Component. IPCs are essentially electronic sub-systems that combine multiple discrete passive components into a single surface mounted device that dramatically reduces the board space required. With this approach, there is a single, low profile package that is less than 20% the size of the same circuit comprised of individual components.

“With PCB real estate at a prime, the size and placement of the passive components are critical because as everything gets smaller it becomes increasingly difficult to place more components on the board,” explains Carmona. “Therefore, design engineers are looking to component manufacturers to deliver miniaturized solutions that occupy next to no real board space.”

Another advantage of the High-Q SMT Bandpass Filter is that as a passive device it does not require DC voltage and so increases battery life of the device.

“The filter extends battery life because you don’t have to use as much current to operate your RF subsystem, which includes chipsets and other components that go into a wireless product’s PCB,” says Carmona.

The reduction in latency is also expected to impact the number of users that can be connected at the same time, or client density, which is another key objective of WiFi 6 given the continued proliferation of smart home, wearable and other devices.

Wi-Fi 6 is designed to allow network access points like routers to communicate more efficiently with more users and devices at once. Wi-Fi 6 routers can pack more information into each signal they send. In addition, Wi-Fi 6 access points will be able to divide each signal between multiple recipient devices, servicing all of them with a single transmission.

“The number of devices that can be connected to one single node at the same time will be greatly improved when you are at home or in public areas,” says Carmona.

Because the LTCC manufacturing process is extremely precise and repeatable, Johanson Technology is able to guarantee the IPC will pass its RF performance requirements with FCC and ETSI and any other emission regulation.

“The IPC is basically a plug-and-play solution,” explains Carmona. “By working with the leading chipset manufacturers, we have already completed the R&D to ensure it is optimised for that specific chip. Not only will it work, but it will comply with the new emission requirements for Wi-Fi 6E."