While users of petrol driven motorcycles and mopeds tend to argue that not only are they more fuel-efficient than cars but that their impact on the environment is much better too there are certainly more questions than answers when it comes to just how environmentally friendly they actually are.

The use of motorcycles has grown globally and that’s been driven by a combination of factors the most important one of which is the growing importance of their ‘last mile’ role in terms of MaaS (Mobility-as-a-Service), which enables the public to plan, book, pay for and have delivered multiple types of different services.

When it comes to their environmental impact Poweramp’s Raymond Ye, (the company is part of Amperex, part of the TDK group that manufactures lithium-ion batteries), makes the point that, “It’s only been relatively recent that environmental standards have applied to L-category vehicles, such as motorcycles, mopeds, quad bikes and trikes with the introduction of the Euro 1 standard in 1999.

“What is even more surprising is that the most recent incarnation of the standard, Euro 5, which became mandatory last year, only limits exhaust emissions at the same level as those of Euro 6 cars.”

Whatever the standards in place, motorcycle OEMs are now switching to using an electric powertrain and the global electric motorcycle and scooter market is reported to have surpassed $30 billion in 2020 and is expected to grow at around 4% CAGR (Compound Annual Growth Rate) between 2021 and 2027. 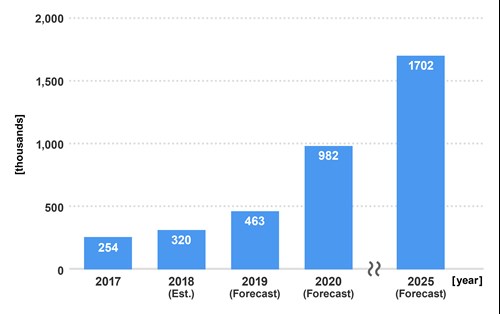 “The full-scale adoption of electric motorcycles, however, will require a plethora of technical hurdles to be cleared, including extending their range and shortening their charging times, along with infrastructure development such as the build-out of charging stations, “ suggests Ye.

A typical electric motorcycle will be designed to look like a petrol motorcycle and will be powered by an electric battery. They tend to be bigger and more powerful than an electric scooter and can travel much further when the battery is fully charged.

Governments around the world are looking to boost EV uptake and that is also seen as helping to increase demand for electric motorcycles and scooters.

Government initiatives that include the likes of subsidies, grants, and tax rebates are being offered on the purchase of electric two-wheelers. In March 2019, for example, the Indian government allocated $1.4 billion under the Faster Adoption and Manufacturing of Electric Vehicles (FAME II) scheme to encourage the adoption of electric vehicles.

Another important driver is surging fuel prices which are encouraging consumers to switch to electric motorcycles and scooters.

At this year’s Consumer Electronics Show in Las Vegas, the Swedish maker of electric motorbikes, CAKE showed off its :work series of professional motorbikes.

As mentioned previously, the growing importance of Mobility-as-a-Service is opening up opportunities for motorcycle OEMs in the professional space.

According to the company’s CEO and founder, Stefan Ytterborn, “The :work series offers users the potential of moving last-mile deliveries and mobile workforces away from traditional solutions for urban transportation exceeding the efficiency of both cars and bicycle.

“This initiative is the company’s single most important contribution to date in speeding up the process towards a zero-emission society.”

In addition, Cake has also developed built-in connectivity capabilities for its bikes and the Ridecake connectivity app has been developed to help riders and professional fleet managers monitor and manage their vehicles via fleet management systems.

According to Ytterborn, “Our connectivity solutions add an extra layer of efficiency through riding data, measurability, control and unique settings - to both private riders commuting or racing, and fleet owners who are looking to maximise the output of their vehicles”.

These connectivity features are available via a data service-enabled CAKE Connect module and can interact over cloud or Bluetooth connections.

CAKE Connect also allows users to modify drivetrain characteristics by adjusting torque, top speed, and regenerative braking so owners are able to customise their bikes to better suit performance needs and riding styles, whether that’s urban commuting, hauling gear, backcountry exploring, or as Ytterborn says, “anything in between.”

With a heads-up display feature, a phone can be used as the bike's interface, displaying in-depth real-time riding and performance data.

The system has also been configured to allow over the air firmware updates, as well as providing access to anti-theft functionality and set custom ride modes.

“The high initial acquisition cost of electric two-wheelers is one of the key market factors restraining the electric motorcycles and scooters market demand,” explains Ye.

However, ongoing R&D activities by OEMs are helping to significantly reduce the battery cost.

“Modern electric motorcycles increasingly use compact, lightweight lithium-ion (Li-ion) batteries with high energy density. The battery cell’s shape can be categorised into cylindrical, prismatic, and pouch (laminated) types,” says Ye. “Of these three types, pouch cells have the highest energy density and can be made thinner and lighter, which is essential for motorcycles where space and weight reduction are critical.”

However, he makes the point that as conventional pouch-type Li-ion batteries generally target small, consumer electronics devices, like smartphones, they do not necessarily have the acceptable operating temperature range suitable for electric motorcycles.

“For instance, battery efficiency can decrease the motorcycle’s range by up to 50% in cold weather climates. Fortunately, new battery technologies and powertrains are making this less of a limiting factor.”

According to Ye, TDK has been able to dramatically improve efficacy in cold environments by optimising the design of the materials used for the electrodes and is able to offer extended lifetime charge cycles and charge/discharge characteristics at lower temperatures.

“A terminal, also known as a tab, is attached to the battery’s positive and negative electrodes to allow current to flow in and out. The MTW technology utilises multiple tabs that are precisely aligned with each other, preventing local overheating, reducing current resistance, and enabling stable discharge at high power output,” he explains.

“If the battery’s cells overheat to the point that they start to burn, the resultant fire cannot be extinguished by standard fire extinguishers; it becomes a self-sustaining chemical fire, also known as thermal runaway.

“For instance, if the supply voltage drops, the motor will draw more current into the windings to maintain its torque, and it can potentially overheat. If left unchecked, overheating will lead to insufficient isolation as for every 10°C rise in temperature, the insulation life halves. This degradation can cause leakages and short circuits, and eventually motor failure. If the motor of the electric motorcycle shuts down unexpectedly while driving, it will stop abruptly, which could potentially cause a crash.”

Another essential requirement is the ability to charge batteries quickly.

“In this case TDK’s Flash Fast Charging technology allows the battery to recharge up to 80% of its capacity within 25 minutes. For electric to displace ICE motorcycles, the Li-ion batteries need to be more efficient, safer, and convenient,” according to Ye, “but we’re now seeing EV motorcycles getting faster, lighter, safer, and more intelligent.”

The i-BMS Battery Management System is a cell chemistry agnostic, compact, integrated BMS that’s been developed for applications such as 2-, and 3-wheelers, automated guided vehicles (AGVs), and robotics.

Hot swap functionality and parallel battery pack support means that it’s possible to quickly exchange depleted batteries with fully charged batteries. For example, when it comes to electric motorbikes, instead of needing to recharge for several hours every evening, fully charged batteries can be rapidly installed in the field at battery swap stations, removing the need to wait and charge on the road. This is certainly helping to alleviate some end-user’s concerns around charging time.

Parallel pack support allows the use of two or more battery packs in parallel and that functionality allows OEMs of 2- and 3-wheelers to use smaller battery modules as well as improving the safety and serviceability of the battery system.

If one battery cell fails while in use, the issue is isolated to that one faulty module which is then easier to replace than would be the case with the entire system and additional battery packs are able to continue to provide power.

Critical components have been pre-integrated into the system, including a pre-charge circuit, on-board current measurement, MOSFET power switches for battery disconnect, and a DC/DC power supply.

All of which means that customers are able to maximize battery utilisation and increase the range, uptime and performance of their vehicle. In addition, BMS Creaton configuration software has been developed that will allow the battery pack designer to create a unique battery setup by defining application specific BMS parameters and safety strategies, optimising battery operation.

Battery management and technology are improving in leaps and bounds and for the millions of people who still have little or no access to buses, trains or even carpools, and who need to travel distances that are too far to walk or bicycle the electric motorcycle will provide them with a reliable and environmentally ‘sound’ solution.