Medical alarm designs require expertise in hardware, software, acoustics as well as an in-depth understanding of the regulatory requirements.

The DAC53701 smart DAC, from Texas Instruments, provides a far simpler way to implement the alarm with configurable in-built waveforms triggered by a GPI.

A patient's health and well-being often depend on the proper functionality of medical devices and medical alarms play an important role in alerting the caregiver when a failure event occurs.

While basic safety is usually obtained through isolation and leakage control, the alarm function is a key contributor to the essential performance for most therapeutic and all critical-care medical devices. The DAC53701 smart DAC provides integrated medical alarm functions compatible with the IEC60601-1-8 standard, such as different alarm priorities, pulse frequency, and burst patterns with configurable timings, thus simplifying the design and shortening the development time.

The device is a 10-bit smart digital-to analogue converter (DAC) with non-volatile memory (NVM), I2C interface, and general-purpose input (GPI). This device is available in a tiny, 2-mm x 2-mm package and it is able to support medical alarm generation using pre-programmed waveforms. The waveforms can be triggered by both I2C and GPI interfaces. This DAC can be used for both auditory and visual alarm generation and it supports configurability of the pulse frequency and the timings for the pulse envelope and the burst.

The signals coming from both the DACs are combined together using the amplifier OP1 that has a shutdown pin, for example, the TLV9002S or OPA363 devices. The combined signal is then ACcoupled to an audio amplifier, such as the TPA6211A1, to drive the speaker.

The TPA6211A1 is an integrated Class-AB amplifier which can drive up to 3 W of output power with very little distortion. The waveforms at different nodes of the circuit in Figure 1 are shown in Figure 2.

As per the IEC60601-1-8 medical alarm standard, the pulse frequency must be above 150 Hz and must have at least four harmonic components that are within ±15 dB of each other. As a result of the square wave pulse frequency and the mixing done by OP1, the speaker output generates multiple harmonics of the fundamental pulse frequency.

The DAC53701 provides a range of timing options for the pulse frequency and the pulse envelope.

The output of the DAC53701 can also be used to drive the visual alarm LEDs as shown in Figure 3. For redundancy, it is recommended that another DAC53701 device is used and does not share the DAC from the auditory alarm.

The force sense output of the DAC53701 helps drive the gate and source of the MOSFET directly and, as a result, compensates for the drift of the gate-to-source voltage (VGS). The circuit in Figure 3 provides linear control of the LED.

In case high-power LEDs are used, a switching LED driver is preferred to linear control for power efficiency and the DAC output can drive the current control pin of the LED driver.

The medical alarm is part of the essential performance for most medical devices. Hence, it is responsible to alert the caregiver in case of any failure event that does not have any redundant protection mechanisms.

the failure of the primary alarm system. This secondary alarm is usually triggered by a secondary processor, a watchdog timer, or a power failure detection circuit.

This alarm circuit is typically powered by a supercapacitor or a battery. Particular medical device standards specify a minimum ON-time for the power failure alarm. Simplistic implementations of secondary alarms often connect an internally driven buzzer to a supercapacitor directly. Such implementations generate a single tone alarm that is hard to modify.

Figure 4 shows a circuit for creating a more effective alarm implementation where custom patterns can be generated using a single or two DAC53701 devices and inexpensive externally driven transducers. Custom alarm patterns help distinguish the alarm more clearly in a crowded ICU setup as compared to a single tone. The DAC53701 operates at very low quiescent current thus increasing the duration of the power failure alarm running from a supercapacitor. 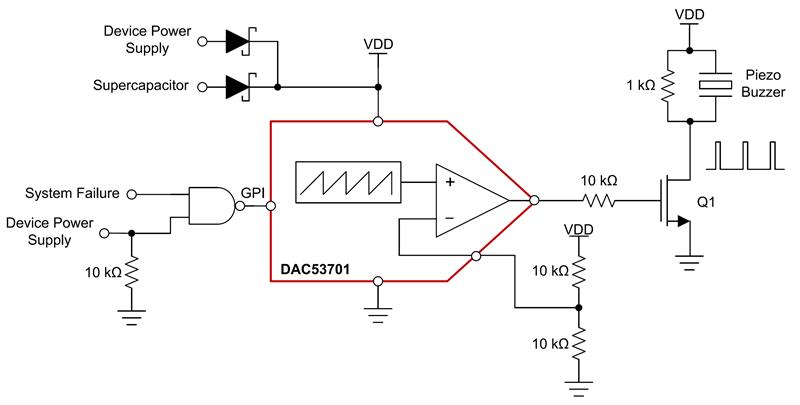 Medical devices need volume control for the alarms and the DAC53701 provides 3 gain control settings that can be used for volume control. A more granular control can also be achieved by controlling the maximum level of the alarm waveforms through the margin-high register bits.

Creating designs for medical alarms can be challenging due to complex regulatory requirements, multi-domain expertise requirements, tuning requirements during testing, portability of the design across multiple end equipment, and total time and cost of the development.

Conventional techniques tend to lack in providing a holistic solution, however, the DAC53701 provides a simple way to create medical alarm designs by addressing all the technical and non-technical challenges.

This device can be used for both primary and secondary or auditory and visual alarm implementations and the tiny package also makes the solution suitable for small form factor designs.