Quality data, in real-time, will be critical to making the concept of Mobility as a Service (MaaS) a reality.

When it comes to encouraging more people to use public transport what can be done? Recent figures from Transport for London (TfL) suggest that people are actually making fewer tube, bus and train trips while traffic volumes are increasing, if only marginally, so what needs to happen to drive down this seemingly growing dependency on private vehicles?

According to Johan Herrlin, CEO, Ito World, the key to encouraging this is to provide good and accurate data, so that people will start to put their trust in alternative modes of transport.

“There’s a mobility revolution taking place in in urban transportation which is being driven by the availability of smart phones,” explains Herrlin. “Smart phones have changed the way in which people engage with one another and has underpinned a shift from privately owned assets to shared forms of transportation, we’re seeing a move away from traditional forms to demand responsive forms of transportation.”

Ito World works with a variety of agencies and operators to align their real-time data to timetables, with the aim of delivering a single, integrated real-time service for cities and regions.

Go to a bus stop or a train station and there are running boards and countdown clocks that make a journey easier and apps have been developed that complement the physical infrastructure of the transport network.

“But while these services work, they could be vastly improved,” according to Herrlin. “Transport operators need to ensure that as more data becomes available it is used to provide more accurate and relevant information to the end user.

“However, in cities like London, where specific rules dictate who can work and operate, there is a degree of complexity that is challenging to operators looking to access data to the benefit of the customer. With multiple operators customers need different apps to access different services. How many are required to provide an accurate service?”

In London, for example, there are at least four different apps for bike-sharing services simply to find out where these bikes are located.

When travellers know they can trust what their app is telling them they will be far more likely to take in the information they’re being provided with, according to Herrlin, and then they will be able to decide what mode of transport is best suited to them – whether a traditional mode of public transport, such as a bus or tram, or an on-demand service.

“People need seamless journey planning and in a fragmented market that’s hard to achieve. Transport is undergoing rapid change and fragmentation is a consequence. As more players move in to the market there will be consolidation, we’re seeing that already with the likes of Uber moving into bike sharing.”

It is critical that high-quality information is delivered in real-time and made available for all parts of a journey. That information informs decision-making but, as we increase access to data and more data is generated, its quality needs to be increased.

“This is crucial,” says Herrlin, “not only does it benefit the commuter but it will make it easier to distribute public services more efficiently.”

Mobility as a Service (MaaS) brings multiple modes of transportation together through a service app interface, removing all the points of friction from booking to payments, and ultimately reducing or eliminating the need for private ownership of cars entirely.

“Ito World has partnered with many cities and transport providers and by making more data available, people have been able to make better choices in how they move around their city. It is up to transport and city authorities, to share that data and put measures in place to guide the behaviour of individuals to drive wider societal goals,” Herrlin explains.

Ito World takes operational data from transport operators and city authorities and turns it into human navigable data, but not only that it enhances the quality of that information to ensure people have access to seamless experiences when travelling across cities.

“This involves us taking data that is operational in nature and designed to manage fleets of vehicles and delivering detail enriched data. We do this for the likes of Apple and Google, taking public transport data and ensuring that it is usable. To ensure the quality of the data we provide we make upwards of 130,000 changes to scheduled data as it passes through our systems.

“Those changes include updating the physical location of assets or compensating for the fact that no data is available in a specific area. Likewise, when maintenance work is taking place and disruption is expected, we take that into account to ensure that the apps we support don’t end up sending people to those locations. Essentially, we are taking scheduled data and overlaying it with real time data.”

“Open data is a great source but insufficient for our needs, so we have access to proprietary data sets, although certain standards and regulations can cause problems.” 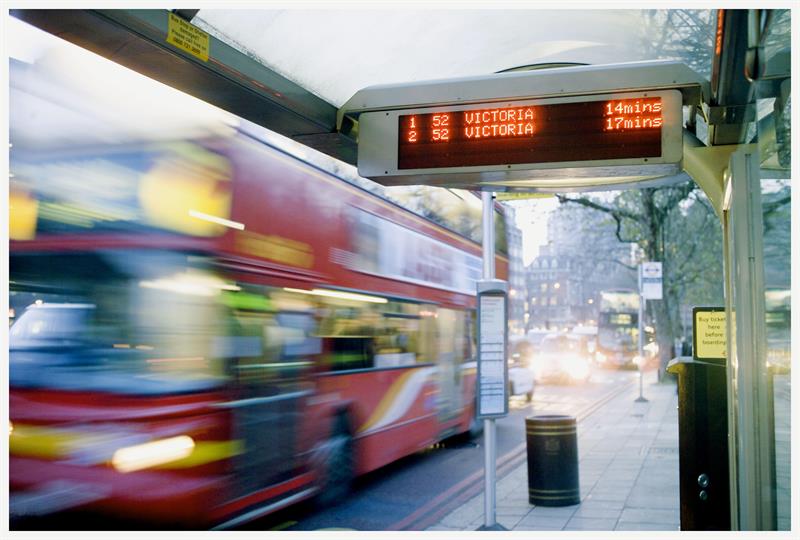 According to Herrlin, the company doesn’t just work with the likes of Apple or Google, but is increasingly working with the authorities themselves.

“The aim being to get the data right in the first place.”

Tech-driven disruptors such as Uber and Lyft offer a much more demand-responsive, flexible service for customers and, as such, traditional public sector operators are now having to adapt and look to data for some of the answers they need in order to keep up, and compete with, these new players.

Arriva and Go Ahead, two of the UK’s largest national bus operators, have invested in making their real-time bus data more accessible to potential consumers by opening it up to one of the largest journey planning apps in the world, Google Maps.

“That has meant they have been able to significantly increase their reach and ridership,” according to Herrlin.

The UK government has also recently launched a consultation to legally require operators to share their data so passengers can get real-time information on routes, timetables and fares to ensure that passengers have the information they need, regardless of their location and the company running the service.

However, both governments and organisations have struggled when it comes to deciding which types of data are appropriate to share with the public and what risks might be associated with opening up access to data. There are some very real issues at play, relating to costs, privacy and security.

MaaS providers need transit accurate data that reflects the real-life customer experience as closely as possible, as well as to ensure the efficient operation of public services.

By working with data experts, such as Ito World, who can leverage open and proprietary data to improve and augment real-time data, authorities and operators will be able to deliver a single integrated real-time feed for entire cities across the globe.

“Our platform has been evolving over many years. We are able to aggregate and ingest the data supplied by our clients, remodel it to cover all forms of transportation, and then put it into a representation of our own design. Not many companies can do that.

“In a complex world schedules, or the intended outcomes or what is planned, do not always survive coming up against the real world. We look to reconcile the two to the benefit of providers and consumers.”

When asked about the accuracy of their data Herrlin says that they provide each user with a scorecard against which they measure the improvement, accuracy and consistency of the data supplied.

“Working with authorities we regularly outperformed their own engines, not only because of the sophistication of the algorithms underpinning our applications but because we are able to look at the entire system.

“People are willing to embrace alternative modes of transport,” says Herrlin,”so now it’s up to transport agencies and authorities to meet their expectations and deliver the accurate information needed for effective journey planning.”

Local government and the digital revolution

Smart transport: Why integrating systems is key to improving mobility

The IVI revolution has begun