The very fabric of our business and personal lives is inextricably linked to two important forces: data and energy.

Data has succeeded in its journey from a wired to a wireless world. We expect it to be available on-demand through increasingly powerful devices and networks. However, the electricity that runs our technology-dependent world has not yet made that transformation, despite the fact that Nicholas Tesla first experimented with wireless power more than 100 years ago.

Electricity has remained tethered to a cable and an outlet, despite the fact that none of us like wires and cords. The fixed reality of a wired physical outlet has hampered innovation in many areas. But now, the key barriers to taking wireless power mainstream - power level, efficiency, and performance - have been removed with the arrival of mass market uses of GaN (gallium nitride) technology in second and even third generation product designs.

We are poised for the world of wireless charging to go mainstream in many important areas. There is already increased global demand for wireless power, with 600M receiver/transmitter units shipped in 2018. This is an increase of 37% over the prior year. And by 2023, the number should skyrocket to more than 2.2B.

What will our world look like with ubiquitous wireless power?

Robots and Industry 4.0
Autonomous intelligent mobile robots become increasingly productive with the ability to drive and park themselves adjacent to or over high-speed high-power charging pads that don’t require human operators. With wireless charging, robots from diverse manufacturers can share the same charger as the limiting factor of incompatible physical connectors has been eliminated. When freed from fixed charging locations and connector-specific hardware form factors, the flexible and highly reconfigurable smart factory and warehouse environments of Industry 4.0 can become a reality.

IoT Sensors and 5G Networks
With the lower latency and 10x data transmission capacity of 5G versus 4G networks - greater intelligence is possible in the next generation of industrial and urban networks. But the loss of power to even a single key IoT sensor can shut down a factory assembly line or an important urban safety or monitoring system. This problem is removed when sensors that communicate data wirelessly are also powered wirelessly.

Additionally, with wireless power and data transmission made possible through walls and windows, 5G receivers can be placed outside a building. And they deliver three times the performance of a receiver inside a building.

Transportation
As we move to more autonomous modes of transportation, particularly in the case of vehicle fleets for both ‘mobility as a service’ and mass public transportation, autonomous (unmanned) wireless charging become increasingly important. The ‘new gas or refueling station’ that accelerates the evolution of true autonomous mobility will require wireless recharging with a level of ‘spatial freedom’ that does not demand precision of placement on a recharging area. 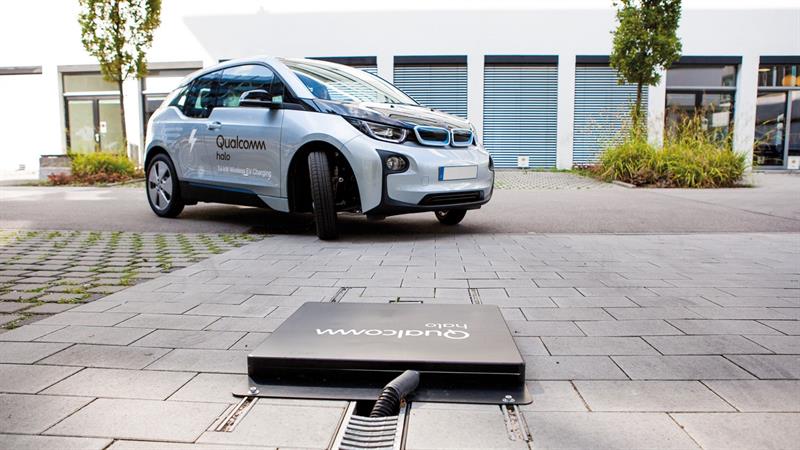 Portable and Handheld Devices
The ability to charge portable consumer devices (laptops, tablets, phones, watches, wearables) and commercial/industrial devices (power tools, first responder radios, professional microphones) just by placing them on a surface will finally deliver on the convenience that users have long demanded. This will be true if the recharging is at home, a coffee shop, a job site, or business.

Overcoming silicon limitations
The use of highly efficient, high frequency GaN technology in power systems design overcomes the former limitations around high power, spatial freedom, and device size that have hampered mainstream wireless power development and deployment. The ideal frequency to minimize heat loss and maximize spatial freedom is 6-13MHz – and that is where GaN significantly outperforms Silicon technology that can heat-up and become inefficient.

High Power Capability
Wireless power systems need to be capable of transferring power from 30 watts up to several hundred watts. High power is required to wirelessly charge today’s laptops (75 watts and above) and robots (200-500 watts), as well as to simultaneously charge multiple devices. Without the high efficiency of GaN in a high-power situation, there is significant heat generated and power lost through that heat, rather than transferred and used for charging a device.

Spatial Freedom
Spatial freedom is about the placement of a device on a charging surface (X and Y-axes), and the gap or space (Z-axis) between a device to be charged and the charger. For most practical applications of wireless power, spatial freedom is a system requirement. The less precision required in the placement of a device, or parking a car or robot, to recharge - the greater the ease of use and hence the market acceptance and adoption of the solution. Increased spatial freedom is enabling new kinds of applications including within 5G networks - where 200-300mm gaps through walls and 20-30mm gaps through windows make the wireless transmission of reliable power a reality. Operating at high frequency maintains high power efficiency, even when the coupling of the transmitter and receiver is reduced (weakened). Only GaN technology delivers the high switching frequency and high efficiency needed to achieve the levels of spatial freedom that makes wireless charging practical and desirable in both consumer and industrial uses.

Charging device size is important both in terms of the aesthetics of consumer design and the practicality of business uses. Smaller and thinner transmitter and coil electronics are possible when operating at high frequency with GaN technology. Additionally, high efficiency and cooler-running power systems mean that fans and heatsinks can be made smaller or even removed. This results in the design of smaller chargers that can simultaneously handle multiple high-power devices.

Efficiency and high power
With high frequency systems using GaN power semiconductors, it is possible to power devices and systems up to 500 watts with the power transmitter and receiver separated by a distance up to 500mm. Low frequency silicon-based wireless power solutions are typically only able to deliver 20 watts at a distance of 5mm. Now wireless power can deliver at the same efficiencies and high-power levels as wired power, with the additional key benefit that industrial and consumer environments need of untethered delivery at a distance.
GaN used to be considered an unproven technology. Now it is used in many applications in consumer, commercial, industrial, and automotive markets. GaN technology provides the high frequency power switching that enables wireless charging solutions ranging from handheld consumer devices charging anywhere on a table to large industrial robots autonomously parking and recharging on pads in factories. With GaN, our lives will no longer be shackled to cables and cords. And both power and data will finally be wireless.

Cutting through the self-driving hype

Millimeter waves for the last mile

Cutting cables: Demand for wireless links is on the increase