Bio-inspired electronics are already transforming outcomes for patients. We caught up with Dr Pantelis Georgiou to find out more.

In the world of technology, a lot of big words get bandied about so frequently they stop meaning big things. ‘Pioneering’, ‘revolutionary’, ‘innovative’… the list goes on. Yet when I spoke to Imperial College London’s Dr Pantelis Georgiou a few weeks back, those were the only words that felt appropriate to describe the research he and his team carry out in the university’s Faculty of Engineering, Department of Electrical and Electronic Engineering.

He is the head of the Bio-inspired Metabolic Technology Laboratory in the Centre for Bio-inspired Technology where a multi-disciplinary group invents, develops and demonstrates advanced micro-devices to meet global challenges in biomedical science and healthcare.

“A lot of the research we do is what we call bio-inspired. If you look at biology and the human body, it’s something that has evolved over millions of years. Now it’s at a state where it does what it does extremely efficiently, with low amounts of power. The human brain, for example, is seven orders of magnitude more efficient than the world’s best microprocessor and, if you look at the components it uses, they’re not entirely precise.

“The neurons in your brain or the receptors that sense glucose in your cells are not working with 32-bit accuracy. They’re slow and noisy components, yet they manage to holistically carry out bodily function with extreme accuracy, precision and robustness.”

“In our group, we look to biology and see the way it’s architected and behaves. Then we try and create microelectronic systems which perform the same function with similar efficiencies, and we also draw parallels between the two mediums. In microelectronics, we have transistors; the currents that flow through those transistors are governed by physical laws which govern the movement of electrons – diffusion and drift. A human cell doesn’t have electrons, but it has got ions which obey the same physical properties.”

Georgiou explains that, because of these parallels, electronic systems can be architected using transistors that obey the same physical laws as biological cells. This approach was originally pioneered in the early 90s by Carver Mead at The California Institute of Technology.

Mead established neuromorphic electronics – a new area of thought where he drew analogies between transistor physics and neural cells in the brain – and came up with the hypothesis that because the laws which govern both are the same, you should be able to architect systems which are similar to the brain. Georgiou says neuromorphic electronics are arguably the foundation for artificial intelligence and machine learning.

“About 15 years ago, I thought I’d take that approach a step further and ask, ‘can we do something similar with metabolic systems?’ I wanted to see if we could create an artificial pancreas for the management of diabetes and looked at the biological cells in the pancreas responsible for glucose management, called beta cells. I saw that there were analogies between the way those cells behaved and CMOS transistors.”

In the human body, blood glucose levels are regulated by the gradual release of the hormone insulin. Type 1 diabetes is an autoimmune disease where a person’s immune system kills off the beta cells that ordinarily create insulin.

Below: The miniature CMOS chip that runs the bio-inspired algorithm to reproduce physiological insulin release. 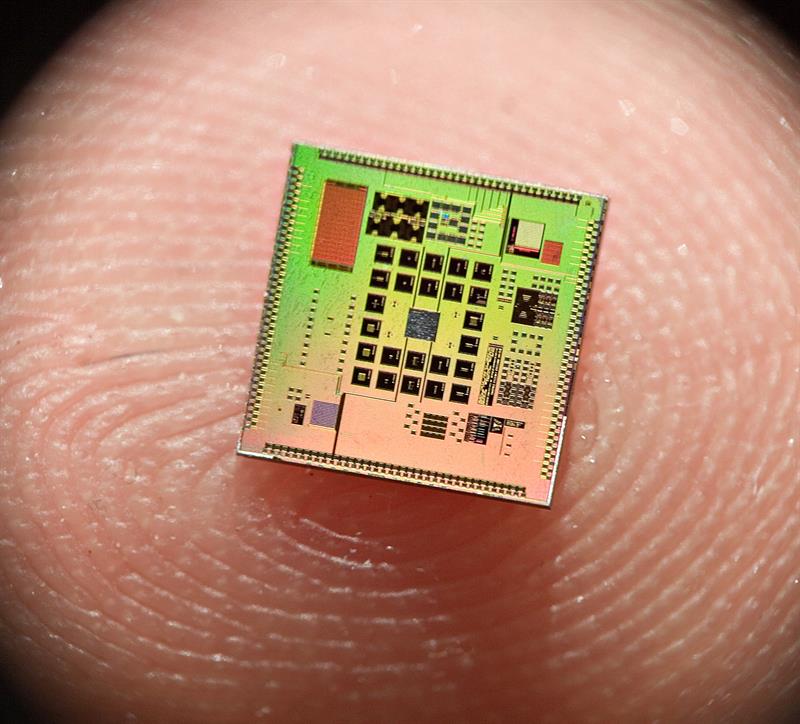 This research was originally Georgiou’s PhD project and, since then, it’s gone on to grow as an initiative in his lab. Georgiou says, “We’ve now clinically trialed the device on 65 patients and I’m pleased to say, as of last December, we have sent the device home fully unsupervised in a free-living environment.”

He explains that the trials that had been carried out prior to this were within hospital environments, and the closed loop system has been shown to manage diabetes. Now, a new direction in his research lab is to bring in wearables to try and monitor additional parameters.

“The problem with insulin injections is that you still need to monitor your blood glucose through finger prick samples. Then, to figure out how much insulin you need, you need to do some mental arithmetic.

“What we offer is a fully closed loop system, which works in real-time. Every five minutes it senses glucose and calculates how much insulin you need. The insulin which is calculated is based our beta cell model so it’s physiological, and then it sends that information to the insulin pump, which then pumps in the insulin continuously.”

Below: The artiﬁcial pancreas developed by the team. 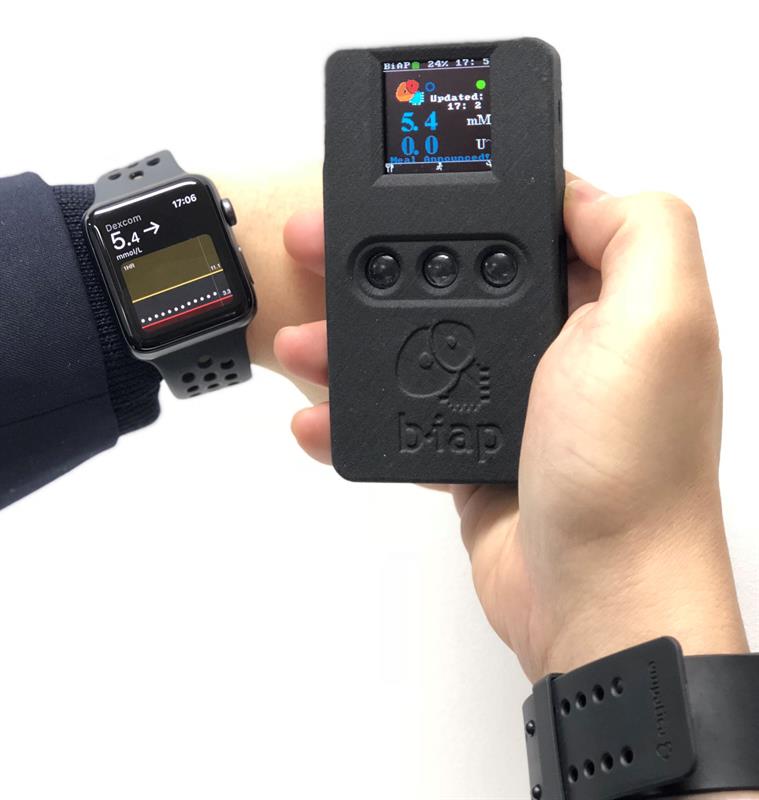 This approach, even in this trial phase, is already showing patients can have better treatment outcomes than existing methods. Georgiou says, “There are two benefits. One is, for the first time, you’re providing patients with a fully automated way to manage their diabetes. They don’t have to inject three times a day or do finger prick samples because they’ve got continuous monitoring and infusion.

“The second, we’ve done a study where we compared [treatments] and we’ve shown that patients spend a lot more time in the healthy blood glucose range, between four and eight mmol/l, that you would expect for a healthy individual. We’ve also reduced the number of hypoglycemia events that patients experience.

“Hypoglycemia is very dangerous, because when you infuse too much insulin and the body is depleted of glucose, you end up fainting and it can be fatal. We showed in a head-to-head study that we totally eradicated hypoglycemia overnight. And compared to standard therapy, we actually reduced it by as much as 20%.”

With these results, bio-inspired electronics should clearly be taken seriously as a way to transform outcomes for patients with various illnesses or diseases. This research project might be focused on diabetes, but Georgiou and his colleagues at Imperial College London have developed electronic chips that mirror biology to help diagnose and treat numerous conditions. Those include a microchip for early detection and therapeutic monitoring of breast cancer and a chip to better understand of the role of hormones in appetite regulation and their impact on conditions such as obesity.

Electronics are already being used to carry out bodily functions, but for this to be automated, they need to be architected in a way that mirrors biology. It’ll be interesting to see what other chips are built to replicate the extreme accuracy, precision and robustness of human organs.

The impact of cells on electronics design

The first walking robot that moves without GPS

Been there, done that

The Year that Wasn’t