As demand grows for MCUs capable of operating at high temperatures, two companies take different routes to offering a solution

The challenge of combining high temperature operation and CMOS technology has been something that few companies have managed to address successfully over the years. Yet there are applications where designers would like local processing – even though temperatures may be pushing towards 200°C.

Amongst the largest users of high temperature devices are those companies involved in oil and gas exploration – so called ‘down hole’ applications – where electronics is deployed at or near the drill bit, which could be more than 2km below the surface. More recent applications for high temperature electronics include jet engines, with interest beginning to appear in the automotive sector.

While it is possible to deploy electronics systems in such applications through the use of cooling, this isn’t always practical and if the cooling system fails, so too does the chip. Looking to address the issues, a number of companies are developing devices which can operate unassisted at elevated temperatures.

Marshall Soares, president of Utah based RelChip, said he has been pursuing high temperature electronics for 13 years. “I was hired to start a design group by a company that wanted components to operate at 250°C. I didn’t think it was possible, but nine months later, we had test dice that worked better than the simulation predicted.” While that technology was abandoned, Soares bought the design group and formed RelChip.

RelChip announced its first high temperature MCU about four years ago, but has only recently supplied samples to its early adopters. The RC10001 – specified for use in temperatures ranging from -55 to 300°C – is designed around an ARM Cortex-M0 core. “One of the main reasons we adopted the M0,” Soares said, “was its low gate count. It’s a 32bit device and the Thumb instruction set makes it efficient – and there’s a lot of support available. 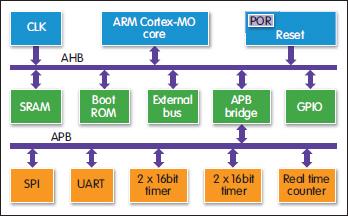 “Other 32bit MCU manufacturers were not prepared to license their technology, while 8051 and 16bit cores didn’t have enough horsepower for what customers said they needed.”

Also looking to build a presence in high temperature MCUs is Austin based Vorago. Launched in 2004 as Silicon Space Technologies, it renamed itself in 2015 to avoid being pigeon holed as a space only company.

Ross Bannatyne, director of marketing, said Vorago’s initial focus was on radiation hardened parts. “But the underlying technology protects against latch ups, which can not only happen with radiation, but also from the effects of high temperature.”

In the past, said Bannatyne, designers would have looked for legacy components that have been ‘up screened’ to operate at a particular temperature. “But they also want an ARM MCU or similar,” he added.

Like Soares, he sees down hole applications as dominating demand, but noted increased interest from industrial and aerospace customers. And, like Soares, he sees opportunities in the automotive sector. “We aren’t involved with automotive customers at the moment, but there are high temperature applications where companies are looking for devices that work at 175°C. But getting into the automotive sector is difficult; there is an existing supplier base and design in takes a long time.”

Soares noted: “There are apps on the engine, for example, but auto makers don’t want to pay a premium for high temperature components; it’s probably a ‘chicken and egg’ situation – volume could bring the price down, but price won’t do down without volume.”

Vorago has what Bannatyne describes as a ‘modest’ high temp portfolio and all are based on the Cortex-M0. The VA10800 is specified for temperatures ranging from -55 to 200°C and is available in plastic or ceramic packages. Complementing this is the VA10820, a rad hard part specified for -55 to 125°C and supplied in a ceramic package. This latter device features triple modular redundancy and ECC on the memory.

“The enabling technology is called Hardsil,” he noted. “We are working with Globalfoundires, but it is process agnostic, which means any CMOS foundry could make these parts.”

According to Vorago, Hardsil improves the robustness of CMOS based devices to extreme temperature and radiation effects. The company says one of the problems affecting semiconductor performance is the fact that millions of parasitic devices are embedded in the silicon. Devices will normally work as designed, but temperature and radiation can trigger state changes which bring unexpected behaviour – latch up, for example.

Fig 1: Vorago’s Hardsil approach is said to protect against the effects of high temperature

Vorago uses a commercial twin well CMOS circuit with NPN and PNP transistors as an example (see fig 1). When a charge created by an ionising particle or electro-migration switches the state of one of these transistors, problems arise.

Hardsil is said to mitigate these effects. It uses a buried guard ring (BGR), a highly conductive layer beneath the CMOS devices to reduce parasitic resistance by two orders of magnitude. This, says Vorago, prevents transistors from going into forward bias and latching up. The BGR is said not to change transistor performance and to require two mask steps and three implants to the CMOS process.

The BGR also acts as a charge collection plate, eliminating voltage transients, reducing the noise floor and improving ESD performance. ‘There are no known instances of a Hardsil based part latching up’, it asserts.

Soares says RelChip uses three foundries for its MCU. “X-Fab, Fraunhofer and Honeywell. All three have to ‘tweak’ their processes in order to provide a higher threshold. RelChip’s device uses a silicon on insulator process, but Soares notes that silicon on sapphire is being researched.

“The problem is that, as you move to higher temperatures, you get a lower threshold and foundries have to be interested in addressing this problem. So far,” he said, “the big foundries haven’t shown any interest.”

RelChip has designed its MCU for manufacture on a 1µm process. “As you start shrinking the design rules,” Soares noted, “thresholds get smaller. But we also have to design for -55°C, which means a temperature range of 355°C. That’s a big range over which to tune for threshold voltage. Although Fraunhofer has a 0.35µm process, I don’t think you’ll see our devices running on anything less than 0.3µm for a while.”

While RelChip’s MCU supports a maximum clock rate of 4MHz, Vorago says its parts can run at 50MHz. Soares observed: “Process variation results in a big frequency range at high temperatures. Some of the faster parts may run at 10MHz, but higher threshold voltages generally mean that performance will drop.

“Most designers work inside a ‘box’. We work outside of that box, trading reliability against temperature. Once we’ve got that sorted, we can look at other parameters, but you can’t sacrifice one for the other.”

While they both address high temperature applications, the two companies differ in their packaging approaches. Vorago is offering the VA10800 in a plastic package specified for 200°C. “And our 225°C parts will be in plastic packages,” Bannatyne added.

Soares, meanwhile, pointed to packaging as being a big contributor to cost. “The parts have to be in ceramic packages,” he contended. “Any organics in the process is a ‘no no’.”

A different spin on superconductivity

A different approach to Big Data