The wireless power market gained further momentum in 2018 as it geared up to become a mainstream technology, IHS says. Fortified by the growth in the sales of wirelessly charged mobile phones, global shipments of wireless power receivers and transmitters across all applications and product segments grew by 37 per cent in 2018 to 600 million units, compared to the previous year.

Global shipments will continue to grow to approximately 2.1 billion units in 2023, according to business intelligence provider IHS.

Mobile phones led growth in the wireless power market in 2018, comprising 71 per cent of all receiver units shipped. This category is expected to continue to drive this market over the next five years.

According to the latest IHS “Wireless Power Market Tracker Q4’18 report,” annual unit shipments of wirelessly charged mobile phones grew by nearly 40 per cent in 2018, reaching 300 million units, mainly driven by flagship models. The growth is expected to build in the mid-range smartphone category, as mobile phone companies plan to extend the adoption of wireless charging in that price band.

“Wireless charging is used as a market differentiator to promote flagship models,” Kithany said. “For example, Huawei and Samsung both included some cool innovations in their smartphones, with features like reverse-charging, wireless power-sharing, multi-device charging and the introduction of NFC wireless charging.” 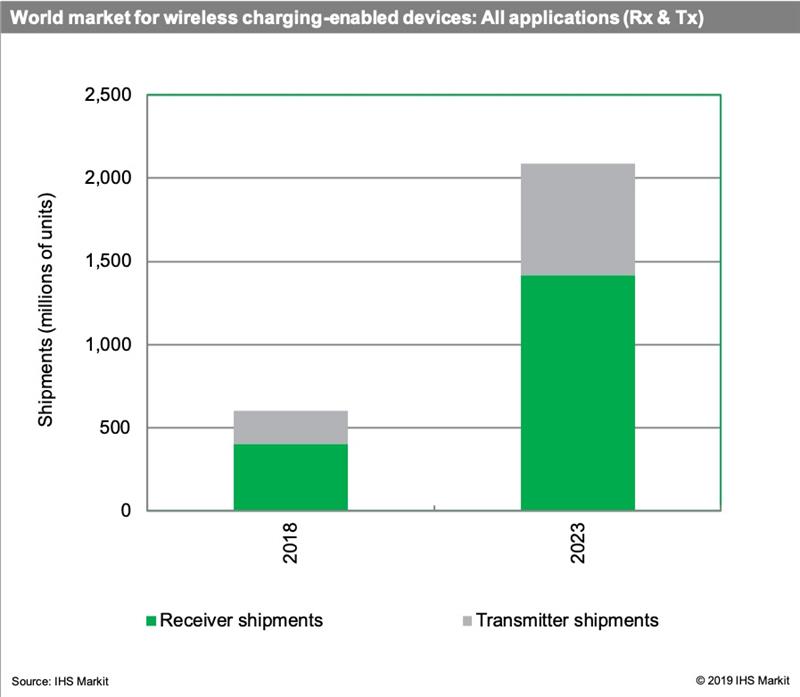 IHS also points to the smart home devices market as an especially promising segment for wireless power, because of the opportunities it presents to manufacturers and the benefits that accrue to consumers. Led by smart speakers, the wireless charging enabled smart home market is expected to grow to more than 100 million units in 2028.

Worldwide server shipments to peak in 2020