According to IC Insights, US companies’ held just over 50% of the total worldwide IC market in 2018.

The US were followed by the South Korean companies with a 27% share, up three percentage points from 2017. The Taiwanese companies, on the strength of their fabless company IC sales, held the same 6% share of total IC sales as the European companies.

Overall, the South Korean and Japanese companies have an extremely weak presence in the fabless IC segment and the Taiwanese and Chinese companies have a very low share of the IDM portion of the IC market. Overall, US headquartered companies show the most balance with regard to IDM, fabless, and total IC industry marketshare. 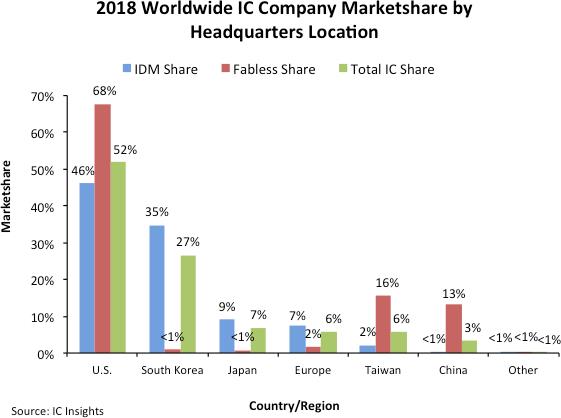 The South Korean and Chinese companies were the only regions/countries to grow faster than the total IC industry (14%) last year. However, with the memory market expected to show a huge 30% drop in 2019, it is likely that the South Korean companies will go from “first to worst” regarding IC sales growth by company headquarters location this year as compared to last year.

Is the US attempting to suppress Chinese tech companies?

A good decade for semiconductor leaders