The data transmission rate of 7.7 Gbps was achieved with a 10 µm microLED and marks a significant step toward the commercialisation and widespread use of LiFi communication.

VLC, commonly called LiFi (short for “light fidelity”), is an emerging wireless communication system that offers an alternative or a complementary technology to radio frequency (RF) systems such as WiFi and 5G. It's seen as a promising technology for security-related applications because light propagation can be confined to a room with no information leakage, as opposed to WiFi communication, which penetrates walls. LiFi also holds promise for ultra-highspeed data transmission in environments where RF emissions are controlled, like hospitals, schools, and airplanes.

Single microLED communications offer an ultra-high data-transmission rate for a variety of opportunities for new applications. These include industrial wireless high-speed links in demanding environments such as assembly lines and data centres, and contact-less connectors, or chip-to-chip communication. But their weak optical power limits their applications to short-range communications. In contrast, matrices of thousands of microLEDs contain higher optical powers than open mid- and long-range applications. However, preserving the bandwidth of each microLED within a matrix requires that each signal has to be brought as close as possible to the micro-optical source.

CEA-Leti’s expertise in the microLED epitaxial process has seen it produce microLEDs as small as 10 microns. The smaller the emissive area of the LED, the higher the communication bandwidth – 1.8 GHz in the institute’s single-blue microLED project. The team also produced an advanced multi-carrier modulation combined with digital signal processing. This high-spectrum-efficiency waveform was transmitted by the single LED and was received on a high-speed photodetector and demodulated using a direct sampling oscilloscope.

“This technology has exciting potential for mass-market applications,” said Benoit Miscopein, CEA-Leti research scientist. “Multi-LED systems could replace WiFi, but wide-scale adoption will require a standardisation process to ensure the systems’ interoperability between different manufacturers. The Light Communication Alliance was created in 2019 to encourage the industry to implement this standardisation.”

In addition to a stand-alone WiFi-like standard, the possibility to include this new technology as a component carrier in the downlink of 5G-NR, a radio-access technology for 5G mobile considerations, is also under investigation to bring a large additional license-free bandwidth. 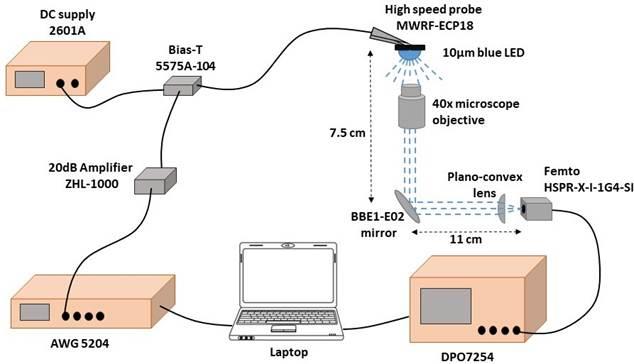 Above: The CEA-Leti testbed for single GaN blue microLED that achieved throughput of 7.7 Gbps

“This may be feasible because CEA-Leti’s LiFi physical layer relies on the same concepts as WiFi and 5G technologies,” said Miscopein. “Matrices of thousands of microLEDs could also open the way to mid- to long-range applications, such as indoor wireless multiple access.”

Preserving the bandwidth of each microLED within a matrix requires that each signal is generated as close as possible to the micro-optical source.

“To meet this challenge, we expect to hybridize the microLED matrix onto another matrix of CMOS drivers: one simple CMOS driver will pilot one microLED,” Miscopein said. “This will also enable the additional feature of piloting each microLED pixel independently, and that allows new types of digital-to-optical waveforms that could eliminate the need for digital-to-analog converters commonly used in the conventional ‘analogue’ implementations of LiFi.”