Flow management and social distancing are critical when it comes to crowd control. An AI-powered LiDAR solution from Quanergy is attracting real interest.

Founded in 2012 Quanergy, based in Sunnyvale, California has developed a high performance AI-powered LiDAR (Light Detection and Ranging) platform that is capable of anonymously tracking human traffic.

“When we were founded in 2012 our intention was to focus on the autonomous vehicles space,” concedes Enzo Signore, chief marketing officer. “But the timeline for autonomous vehicles has changed. When we realised that they aren’t really going to start to appear until the second half of this decade, it made sense for us to target other market segments that could deploy and use this technology. When combined with perception software we can interpret the data derived from LiDAR and apply it to a broad range of security and smart space use cases.”

A good example of how Quanergy’s LiDAR solutions are being used can be found at airports including the likes of Miami International, McCarron in Las Vegas, Singapore and Vienna..

These airports are using the company’s LiDAR solution to count and manage queues in real-time and control passenger numbers. With the advent of the COVID-19 pandemic Quanergy’s platform is now being used to apply and enforce social distancing in public spaces.

“The great advantage of using our technology is that it’s possible to track human traffic without compromising the privacy of the individual,” explains Signore. “As a result we don’t have an issue with civil liberties because we don’t collect personal data or use facial recognition to monitor their activity.

“Security check points tend to be the biggest pain point at airports, with very long lines. Our technology can speed up the processing of passengers and enhance security management. LiDAR makes it possible to better understand the geometry of an area and when deployed with perception software, it is possible to not only count the number of people but calculate wait times. That data can then be taken by third parties and acted on.

“If out platform ‘sees’ people are gathering too closely together, or too many people are grouped in one space, it can alert airport security, who can then quickly respond and disperse the crowd. It can also be used by passengers to identify and locate queues and avoid them.”

Even before COVID-19 the demand for solutions capable of flow management had become a key growth market for the company.

“It’s proved a significant opportunity for the technology and we reasoned that a pivot away from autonomous vehicles which, don’t get me wrong, remains an important market for Quanergy, would provide us with more commercial opportunities. In practice we found that with flow management the adoption of our technology was much faster.”

LiDAR is a time-of-flight sensing technology that uses low-power eye safe lasers to measure the time it takes for the laser to make a round trip between the sensor and its target.

Quanergy has taken this technology and combined it with its Qortex perception software which, powered by machine learning, is capable of providing accurate centimetre level information about numbers of objects, their spatial location, direction and speed.

“By aggregating the data we collect we are able to generate a 3D point cloud image that enables us to provide both spatial location and depth information in order to identify and track moving objects,” says Signore.

“A point cloud is a large data set composed of 3D point data which can be transformed by software to create LiDAR-based 3D imagery of a given area.”

“The M series has been designed to provide a 360 degree view and is suitable for mapping, security and smart space applications. It offers long range coverage and real-time 3D perception,” explains Signore. “The S series, based on Optical Phased Array technology, is capable of providing electronic beam steering. Based on a scalable CMOS silicon process they are both cost effective and suitable for mass production.”

As Signore explains, the M series is intended for longer distances, particularly outside of buildings, and can offer much higher levels of accuracy, when combined with perception software, than would be the case by simply using cameras. 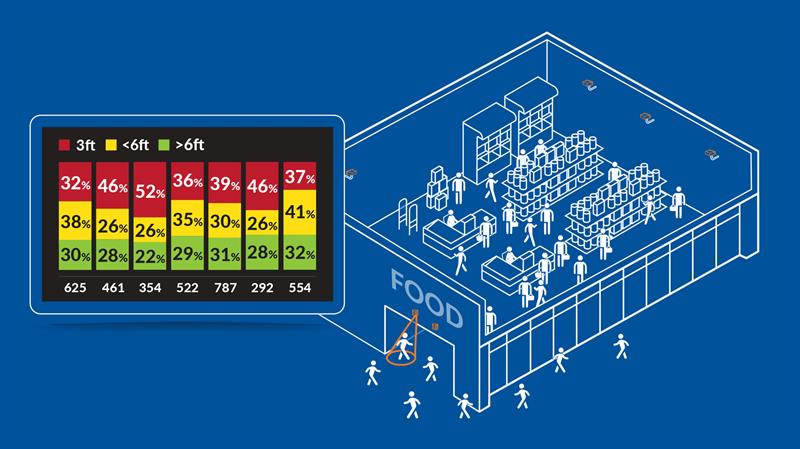 “According to our own research, customers have seen an 84 per cent reduction in false alarms when using LiDAR combined with cameras.

“LiDAR offers much greater accuracy and not only can it locate people it can then track them too – not only reducing false alarms but improving security as well.”

The company’s Flow Management Platform provides real-time analysis for people counting, object detection and tracking. Comprising of the M series with QORTEX DTC (Detect, Track, Classify) software which uses a combination of advanced object detection, tracking, and classification capabilities to reduce false alarms, and the company’s S3-2 People Counter, the platform is being used across a range of different end markets from airports to sport stadia and industrial facilities.

“This platform is being used to not only count people, but despatch services based on actual use, reduce crowding, and monitor crowding on public transport.

“Smart cities have proved an important, and growing, market for this type of technology and we have seen over 25 implementations around the world,” according to Signore.

“Our platform can also be used in the industrial space to detect and profile stock. Think of grain or coal, for example, and by using LiDAR it is possible to sweep across the surface of what’s being stored and create a 3D image of the pile to calculate volumes.”

The efficacy of LiDAR is determined by lighting and surface conditions but, according to Signore, the company’s solution can perform effectively in all lighting and atmospheric conditions, so it can operate 24/7.

“The concept of ‘reflectivity’ defines how much an object will reflect light - whether that’s a vehicle, object or a person - and there is a trade-off between reflectivity and range,” he admits.

Quanergy continues to grow from strength to strength and recently announced its first commercial integration of its 3D AI-powered LiDAR solutions with the Genetec, Security Center unified security platform.

“This integrated solution will provide advanced people flow and occupancy management in smart spaces as well as enhanced threat detection and surveillance in high-security environments,” explains Signore. “Our 3D LiDAR and sensor data flow, combined with Genetec’s Security Center will provide real-time accuracy for a wide variety of industrial applications including public facing businesses such as banking and retail.”

When it comes to smart cities the flow of people is critical, so rather than monitoring individuals it’s about the overall numbers; privacy is also of critical importance and Quanergy’s solution is well placed to address both.

“Flow management is driving demand for our solutions and we have seen a significant uptick in demand for our technology in light of the COVID-19 pandemic. There’s certainly been a high level of interest and not just in addressing the current crisis but in planning for the longer term and helping people, cities and businesses to return to normal.”

Managing the hype around 5G