Device developers have always looked to provide some degree of programmability in their products. But, with the exception of FPGAs and a few other parts, the components which developers have available to them offer fixed functionality.

For designers, that means having to create different layouts to accommodate each fixed functionality device. For manufacturers, it means stocking a wide range of components.

While the digital domain has benefited most from programmability, efforts have been made over the past couple of decades by the likes of Lattice and Zetex to create programmable analogue parts. In the main, these efforts have not been successful, although pioneers such as Anadigm continue to make such devices. More recently, Maxim launched the MAX11300. At the product’s launch, Martin Mason, executive director, core products, signal chain, said. “We have been talking consistently, as an industry, about analogue integration. That’s fine for a product running at 100million units a year, but not so good when you need 10,000 a year for an industrial application.”

Now, a US fabless company is targeting the power domain. Called AnDAPT, the company has developed adaptive technology which combines analogue power blocks and FPGA flexibility to enable the creation of custom power management solutions. And with investors including Intel Capital and Cisco, there is the suggestion that AnDAPT has a good idea.

John Birker – a pioneer of programmable logic – is AnDAPT’s architect. He said: “The old saying of there being more than $1 worth of analogue for every $1 of digital is true. Digital is typically surrounded by a sea of resistors, capacitors and so on, with analogue devices to distribute power to the point of load.”

One of the issues with delivering power is the range of voltages being delivered and required. “Power from an Li-ion cell may come in at 4.2V,” Birkner said, “but components need less than that. It was 5V, now it’s 1.2V and moving to 1V or less. Not only that,” he continued, “there’s a variety of voltage rails and complicated sequencing. So smart power is emerging.”

AnDAPT is attempting to displace catalogue power devices – fixed function discrete devices – and replace them with a programmable platform that integrates them into a power management IC, or PMIC.

“We’re focusing on power,” Birkner asserted. “Most of the blocks in our device are analogue and are as efficient as catalogue power devices.” But he realises that AnDAPT’s approach isn’t going to be applicable in all sectors.

“Mobile phones will have custom PMICs performing exact functions, with the intelligence coming from the processor,” Birkner noted. “But when you move to other markets, volumes are lower and you begin to see a mix of PMICs and catalogue parts. At low volumes, catalogue devices take over and a lot of these are analogue; for example, an LDO is a linear device and isn’t power efficient.”

The goal is to bring the benefits of PMICs to the low volume market – benefits which include: lower device and board costs; better monitoring, control and management of power; better power efficiency; and reduced inventory costs.

AnDAPT’s approach is based on its adaptive multi-rail power platform, or AmP. These programmable platforms can then be used to create custom power devices by selecting particular IP based components – µAnalog – using a drag and drop approach.

An example µAnalog element is the C200 synchronous buck converter. Offering 1% load regulation, the block has a peak efficiency of 95%. Accepting voltages ranging from 3.3 to 20V, the block can deliver 0.6 to 5.5V. Featuring adjustable switching frequency and programmable gain and phase marging, the block also supports voltage mode control.

AnDAPT’s other major investor is specialist IC foundry Vanguard, which is manufacturing its products on a 110nm bipolar CMOS DMOS (BCD) process. “Vanguard can make good MOSFETs, with an Rds(on) of approximately 40mΩ; they’re quite competitive,” Birkner contended.

If a particular power block isn’t available in the library, users can create a specific part using Verilog. “For the most part,” Birkner said, “engineers won’t be interested in getting into Verilog, but there are always those who want to design everything themselves.”

Three AmP platforms are available initially – accommodating four, eight or 12 power blocks – and with capacities of 1A, 3A or 6A. “Platforms can contain any combination of power components,” Birkner pointed out. “Although we have released the 12V family first, we will be looking to create higher voltage parts – not only up to 48V, but also down to 5V, to address the needs of those designing battery operated hand held devices.”

Birkner pointed to the AmP8D6 (see fig 2) as an example. “It has eight power blocks on the digital fabric, with the analogue fabric used to configure the power blocks. The scalable integrated MOSFETs enable complex switching and voltage regulation schemes to be created, while the sensor blocks allow current to be measured in order to provide current limiting.” The digital fabric also houses compensation RAMs (CRAMs), which enable PID control. 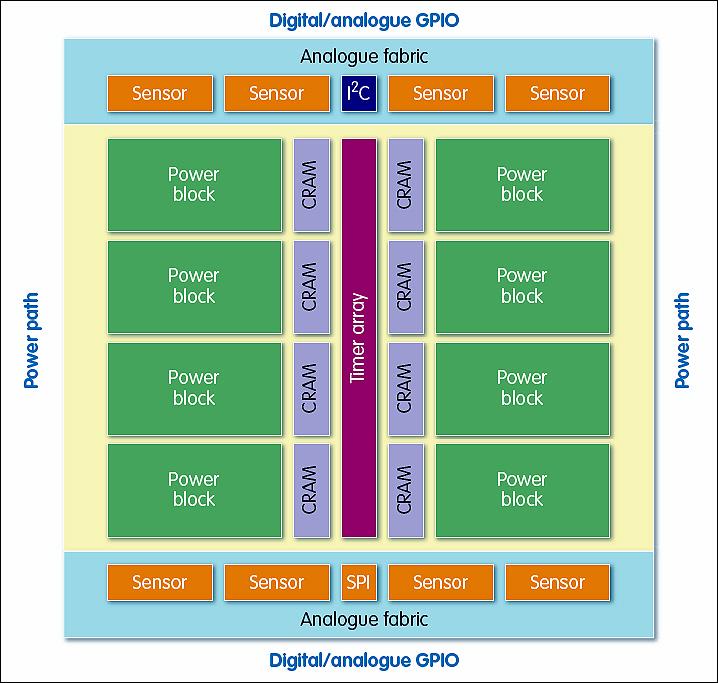 Figure 2: The AmP8D6 houses eight µAnalog blocks in a digital and analogue fabric

AmPs can be configured using the WebAmP cloud based tool suite. Users select the particular device for their application, then simply drag the required components from a library onto the AmP. “When you drag a component from the library – a buck regulator, for example – it’s parameterised,” Birkner said. “When you click on the block, a window opens and you can input the appropriate values for Vin, Vout, current and so on.”

He gave a voltage mode regulator as a design example, noting it can be created using an adaptive error digitiser, a CRAM, a dynamic timer and a switching regulator. “This allows you to determine the voltage, compare it to a reference and perform a differential comparison. The process starts with a coarse approximation, then switches to finer control.

“What you want is to work at a constant duty cycle,” he continued, “say 1MHz. But you can go to 2MHz or 4MHz.

AnDAPT believes its approach will bring ‘unprecedented disruption’, with a combination of flexibility and low cost with sustained benefits across a range of segments. Birkner concluded: “While we’re going to be targeting the high end server sector first, we will then push into the consumer and IoT markets.”